by jeff foust
in World News
Reading Time: 3 mins read
A A
464
SHARES
1.8k
VIEWS
Share on FacebookShare on Twitter

WASHINGTON — The new head of Russia’s space agency backed away from comments suggesting Russia would withdraw from the International Space Station as soon as 2024 but expressed doubts Russia would be involved through 2030.

Yuri Borisov raised alarms among the other ISS partners July 26 when he told Russian president Vladimir Putin that Russia would end its participation on the station after 2024. The comments came as NASA and other partners continued plans to extend ISS operations to 2030.

In a July 29 interview with the Russia 24 television network, also published on the Roscosmos website, Borisov emphasized that Russia would leave some time after 2024, and not 2024 itself. “We stated that we intend to do so not from 2024, but after 2024,” he said, according to a translation of the document.

He said Russia would abide by the intergovernmental agreement for the ISS partners that requires countries to provide at least one year’s notice before withdrawing. The withdrawal process, he added, could take up to two years.

“We haven’t warned about it yet, there’s no need for it,” he said of withdrawal. “We just said that after 2024 we are starting the exit process. Whether it will be in mid-2024 or 2025 — it all depends, in fact, including on the state of performance of the ISS itself.”

Industry sources said that Roscosmos officials have privately advised NASA that Russia is unlikely to withdraw from the ISS before it starts launching modules for the Russian Orbital Service Station, a new national space station. That is expected no earlier than 2028.

Borisov expressed skepticism in the interview that Russia will remain involved with the station until 2030. One was his belief that Russia would soon exhaust the research it wanted to conduct on the station. “From a scientific point of view, we do not see any additional dividends, stretching this process until 2030,” he said of that research.

Another issue involves maintenance of the station. He said Russian engineers were concerned there could be “avalanche-like” failures of systems on aging modules. Because of that, “about two years ago we began to seriously think about the continuation of the manned program and the development of a domestic orbital station.”

He added that ISS crews, including those on the U.S. segment, are now spending time on station maintenance that begins “to exceed all reasonable limits” and thus takes away from research activities.

NASA officials, by contrast, have emphasized there is abundant time available for doing research on the U.S. segment. “We’re flush with crew time,” said Kirt Costello, chief scientist for the ISS program at NASA, during a briefing in June. “We’re not seeing crew time as a limiting factor.”

Other NASA officials insisted after Borisov’s earlier comments that there is no near-term change in ISS operations planned, including no formal notification from Roscosmos of its intent to withdraw from the partnership.

Borisov took over as head of Roscosmos July 15, replacing Dmitry Rogozin, who was dismissed by Putin. Borisov, previously deputy prime minister with responsibilities that included the defense and space industries, acknowledged that Russia had fallen behind other nations in satellite manufacturing.

“If we compare today the state of the space groups of the main players in this market — Americans, Europeans and Chinese — they have long overtaken us in this regard,” he said in the interview, which came after a visit to a Russian spacecraft manufacturer, Lavochkin.

He said a “radical restructuring” of Russia’s space industry may be required to improve production, a process he said will be hindered by Western sanctions that restrict the export of satellite-related technologies to Russia. He argued that Russia’s electronics industry is able to produce components that are “quite acceptable” and that Russia can work with unnamed countries that have not imposed relevant sanctions. 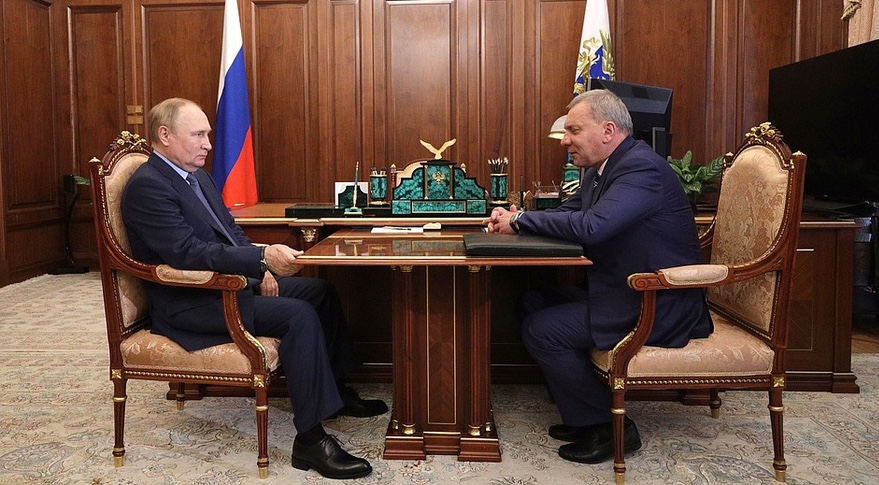