by associated press
in World News
Reading Time: 3 mins read
A A
464
SHARES
1.8k
VIEWS
Share on FacebookShare on Twitter

DRONE SHIP This June 29, 2022 file photo shows a Sea Hunter, a crewless vessel, arriving at Pearl Harbor, Hawaii to participate in the Rim of the Pacific Exercise 2022. UNITED STATES NAVY PHOTO VIA AP

FACING a growing threat from China, the United States Navy is envisioning drone ships to keep an electronic eye on enemy forces across the Pacific Ocean, extending the reach of firepower and keeping sailors out of harm’s way.

The Navy is speeding up the development of those robotic ships as an affordable way to keep pace with China’s growing fleet while vowing not to repeat costly shipbuilding blunders from recent years.

The four largest drone ships are being used together this summer during a multination naval exercise in the Pacific Ocean.

Other smaller waterborne drones are already being deployed by the Navy’s 5th Fleet in the waters off the Middle East.

The goal in coming years is to see how these research vessels’ radar and sensors can be combined with artificial intelligence, and integrated with traditional cruisers, destroyers, and submarine and aircraft carriers to create a networked fleet that’s resilient because it’s spread over greater distances and more difficult for enemies to destroy, the Navy says.

“It’s about moving the technology forward and having confidence in the capability. Everything takes time,” said Cmdr. Jeremiah Daley, commanding officer of Unmanned Surface Vessel Division One in California.

The Navy believes the technology can help with the three keys for military success — weapons range, scouting and command and control — at a lower cost and risk to personnel, said James Holmes, a professor at the Naval War College in Newport, Rhode Island.

But all those benefits must be proven, along with long-term durability in a harsh saltwater environment, he said.

“We’re sort of in Jerry Maguire ‘show me the money’ territory with the tech. It will undoubtedly be useful, but whether it would be a game-changer is far less clear,” said Holmes, who doesn’t speak for the Navy.

Before moving forward, the Navy must first win over a skeptical US Congress after a series of shipbuilding debacles.

Its speedy littoral combat ships have had propulsion problems, leading to early retirements. The “Advanced Gun System” on its stealth destroyer was a bust because of expensive ammunition. And its newest aircraft carrier had problems with elevators and a new system to launch aircraft.

Critics said the Navy rushed to cram too much new technology onto those ships, leading to failures and growing costs.

“We can’t just throw all the resources at (robotic ships) with the track record of 20 years of failed ship programs,” said Democratic Rep. Elaine Luria of Virginia, a retired Navy officer.

The Navy’s Unmanned Task Force is taking a new approach, using a military equivalent of a venture capital model to expedite new ideas, and moving forward only after technologies are proven, said Michael Stewart, the task force’s director.

This summer, four large drone ships are working alongside conventional ships during war games called the Rim of the Pacific Exercise.

These include the Sea Hunter and Sea Hawk, diesel-powered ships equipped with outriggers for stability in rough seas. The other two are Ranger and Nomad, which are based on oil platform replenishment ships. They have large flat decks from which a missile was successfully fired last year. 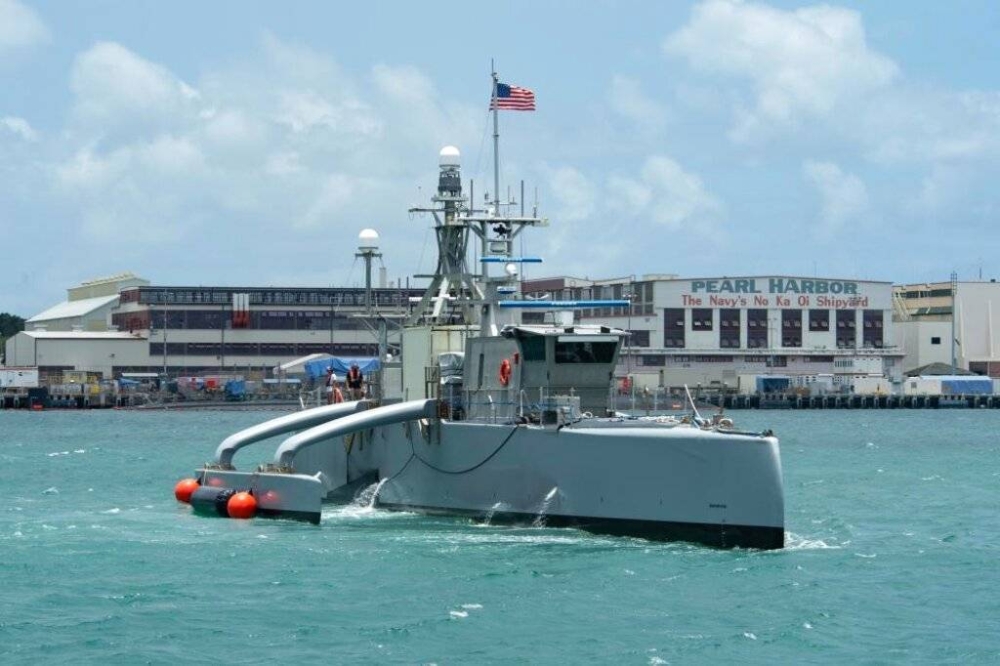 US seeks to cool China ire ahead of Pelosi's Asia trip