by marian ansah
in Africa News
Reading Time: 3 mins read
A A
464
SHARES
1.8k
VIEWS
Share on FacebookShare on Twitter

The controversial South African opposition figure, Julius Malema, has warned of an impending uprising similar to the “Arab Spring” that will target white people and “black elites”.

“When the unled revolution comes… the first target is going to be white people,” Mr Malema told the BBC’s Hardtalk programme.

He demanded an “intervention” to boost the quality of life to avoid unrest.

The MP, known for strident views, has twice been convicted of hate speech.

He has also faced fraud and corruption charges, which were later dropped. Mr Malema said they were politically motivated.

The Arab Spring was a series of pro-democracy uprisings which began at the end of 2010 in Tunisia, where the president was toppled, and spread to several other countries in the region.

“The violence that is going to happen in South Africa is because the elite is disappearing and the poor are becoming more poorer,” he told the BBC’s Stephen Sakur.

“Therefore there’s going to be something that looks like an Arab Spring. That, we are guaranteed.”

Former President Thabo Mbeki issued a similar warning about a possible uprising last week. He criticised his own party, the governing African National Congress (ANC), saying it has no plan to deal with the problems of poverty, unemployment and inequality.

With high levels of joblessness, inflation hitting a 13-year high, complaints about corruption and a troubled energy sector, South Africa is facing many challenges.

Current President Cyril Ramaphosa, in a recent statement to the nation, acknowledged a “difficult time for our country”. But in a separate speech, he responded to Mr Mbeki’s criticism, saying the ANC has a plan to fix things.

Mr Malema, who leads the opposition Economic Freedom Fighters (EFF), has long courted controversy and has previously been found guilty of using hate speech, in 2010 and 2011 for comments he made about the woman that accused former President Jacob Zuma of rape and then for singing the song “Shoot the Boer (Afrikaner)”.

In the 2019 general election the EFF won nearly 11% of the vote and has 44 seats in parliament.

Image caption,
Mr Malema’s message that the ANC is not working for the poor has gained popularity

Mr Malema is currently facing allegations of hate speech against white people, but has denied that he is causing tensions between different races and says the violence in South African cannot be pinned on his following.

“I’ve engaged in democratic ways of trying to resolve problems in South Africa, and therefore those who are scared of our ideas try and create an impression of very violent people. We are not.”

The opposition leader used to be a member of the ANC, but was kicked out for fomenting divisions and bringing the party into disrepute. He denied the accusations, saying he was being persecuted.

Mr Malema also wants a national shutdown to protest against the ruling ANC.

“We are going to bring our bodies to the streets and demand that [President] Ramaphosa must resign.

As for his own party, the EFF, Mr Malema believes they would govern the country much better than the ANC.

“There’s going to be the EFF that is going to take over South Africa and run it for the better.” 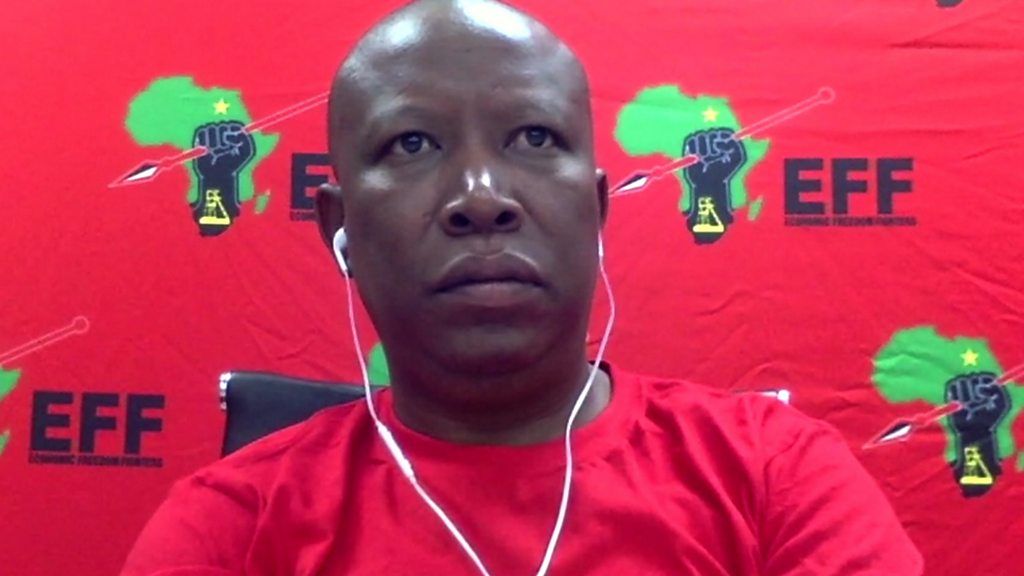 Why female artistes should be encouraged —Yemi Alade