Russia, Ukraine Accuse Each Other of Prison Attacks That Killed Ukrainian POWs

by dion pingree
in World News
Reading Time: 3 mins read
A A
464
SHARES
1.8k
VIEWS
Share on FacebookShare on Twitter

Dozens of Ukrainian prisoners of war were killed when a prison in eastern Ukraine was destroyed in a missile strike. Russia and Ukraine on Friday accused each other of carrying out the attack. Neither claim could be independently verified.

Russia’s defense ministry said 40 prisoners were killed and 75 were wounded in the strike on the prison in Olenivka, a part of Donetsk province held by separatists. A spokesman for the Russian separatists put the death toll at 53 and accused Kyiv of targeting the prison with U.S.-made HIMARS rockets.

Ukraine’s armed forces denied carrying out the attack, saying Russian artillery had targeted the prison to hide the mistreatment of the prisoners. A Russian Defense Ministry spokesperson described the attack as a “bloody provocation” aimed at discouraging Ukrainian soldiers from surrendering.

Ukraine’s military intelligence said Russian claims were part of an “information war to accuse the Ukrainian armed forces of shelling civilian infrastructure and the population to cover up their own treacherous action.” Ukrainian Foreign Minister Dmytro Kuleba said Russia had committed a war crime, and he called for international condemnation. The International Committee of the Red Cross asked on Friday for access to the site and to evacuate the wounded.

This frame from a video shows a destroyed barracks at a prison in Olenivka, in an area controlled by Russian-backed separatist forces, eastern Ukraine on July 29, 2022. /AP

Separately, Ukraine said at least five people had been killed and seven wounded in a Russian missile strike on the southeastern city of Mykolaiv, a river port just off the Black Sea. Russia did not immediately comment on the situation.

Ukraine’s Infrastructure Minister Oleksandr Kubrakov said the country was ready to restart grain shipments from its southern ports under the UN-brokered agreement but noted that no dates had been set.

Russia and Ukraine agreed last week to unblock grain exports from Black Sea ports, which have been threatened by Russian attacks since the invasion. The blockade of grain in Ukraine, one of the world’s biggest exporters, has fed into global food price increases.

On Friday, U.S. Secretary of State Antony Blinken spoke by phone with Russian Foreign Minister Sergey Lavrov and mentioned the importance of Russia’s following through on the agreement. Blinken also warned of consequences should Moscow move ahead with suspected plans to annex portions of eastern and southern Ukraine. During the call, Blinken urged Moscow to accept a U.S. offer to release two American detainees — basketball star Brittany Griner and Paul Whelan, who is in a Russian prison.

Meanwhile, a Russian operative who worked on behalf of one of the Kremlin’s main intelligence services has been charged with recruiting political groups in the United States to advance pro-Russia propaganda. That includes the invasion of Ukraine earlier this year, the Justice Department said Friday.

Aleksandr Viktorovich Ionov is accused of using groups in Florida, Georgia and California to spread pro-Kremlin talking points, with prosecutors accusing him of funding trips to Russia and paying for travel for conferences. He is also charged with conspiring to have U.S. citizens act as illegal agents of the Russian government.

An appeals court in Kyiv on Friday reduced to 15 years the life sentence of a Russian soldier convicted in the first war crimes trial since Russia invaded Ukraine in February. Critics said the sentencing of Vadim Shishimarin, a 21-year-old contract soldier who pleaded guilty of killing a civilian and was convicted in May, was unduly harsh. The soldier had confessed to the crime, expressed remorse and said he was following orders. His lawyer had appealed to the court to reduce the sentence to 10 years. He said it was highly likely Shishimarin would be returned to Russia in a prisoner exchange.

In other news, the British Defense Ministry posted an intelligence update on Twitter Friday that said Russia, “in a significant change,” has handed over responsibility for portions of its frontline activities to the Wagner Group, a Russian private military company.

The post said the move makes it difficult for Russia to deny links between such companies and the Russian state. The measure was undertaken, according to the ministry, because Russia likely has “a major shortage of combat infantry.” 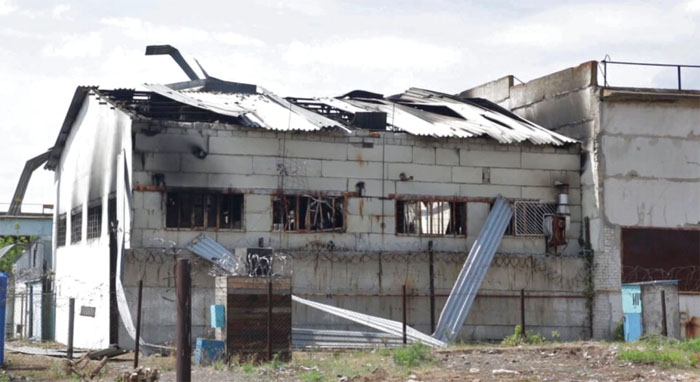