by jennifer ouellette
in Robotics
Reading Time: 3 mins read
A A
464
SHARES
1.8k
VIEWS
Share on FacebookShare on Twitter

These spiders aren’t pining, they have ceased to be! —

Welcome to the exciting, rather macabre new field of “necrobotics.”

Shortly after the Preston Innovation Lab was set up at Rice University, graduate student Faye Yap was rearranging a few things when she noticed a dead curled-up spider in the hallway. Curious about why spiders curl up when they die, she did a quick search to find the answer. And that answer—essentially, internal hydraulics—led to delightfully morbid inspiration: Why not use the bodies of dead spiders as tiny air-powered grippers for picking up and maneuvering tiny electronic parts?

Yap and her colleagues—including adviser Daniel Preston—did just that. They transformed a dead wolf spider into a gripping tool with just a single assembly step—essentially launching a novel new research area they have cheekily dubbed “necrobotics.” They outlined the process in detail in a new paper published in the journal Advanced Science. The authors suggest the gripper could be ideal for delicate “pick-and-place” repetitive tasks and could possibly be used one day in the assembly of microelectronics.

Preston’s lab specializes in so-called soft robotics, which eschews the usual hard plastics, metals, and electronics in favor of more nontraditional materials. Hydrogels and elastomers, for example, can serve as actuators powered by chemical reactions, pneumatics, or even light. Roboticists have also long found inspiration for their designs in nature, studying the locomotion of such animals as cheetahs, snakes, insects, starfish, jellyfish, and octopuses. (See, for example, our story on the development of the OctaGlove, designed to grip slippery objects underwater.)

Count spiders among those creatures that continue to fascinate and inspire robotics, thanks to how well their bodies integrate both rigid and soft components. There’s also the unique means by which they control their legs. “Spiders do not have antagonistic muscle pairs, like biceps and triceps in humans,” Yap said. “They only have flexor muscles, which allow their legs to curl in, and they extend them outward by hydraulic pressure. When they die, they lose the ability to actively pressurize their bodies. That’s why they curl up. We wanted to find a way to leverage this mechanism.”

Past researchers have designed spider-inspired pneumatics, joints, and muscles, but fabricating those components at such small scales typically requires multiple, painstaking steps. There have also been biohybrid systems based on live or active biological materials, but Yap et al. note that these demand careful and precise maintenance. One memorable paper reported controlling a live spider with electrical stimulations, and scientists have found uses for spider silk and molted spider exoskeletons. But on the whole, “the incorporation of biotic materials derived from the spider body itself has not yet been explored,” the authors wrote.

Enlarge / Rice University graduate student Faye Yap with a deceased wolf spider for use as a necrobotic gripper.

In fact, the Preston lab might be the first to just repurpose the actual cadavers of dead spiders as a raw material for robotic components. And it didn’t require much effort to do so. A spider’s prosoma, or hydraulic chamber, contains internal valves that enable the creature to control each leg individually. Once the spider dies, that control is gone and the legs work in unison. That was an advantage for Yap et al.’s plan to turn the spider into a gripping device.

All they needed to do was insert a needle into the prosoma of a dead spider and affix it to the spider’s body with superglue to form a hermetic seal. They just placed a droplet of superglue on the needle shaft and let the natural minimization of surface energy play out. Gravity pulled the droplet down the shaft until it contacted the spider cuticle and formed a meniscus along the interface between the needle and cuticle that resulted in an air-tight seal as the glue cured. The whole process took 10 minutes. 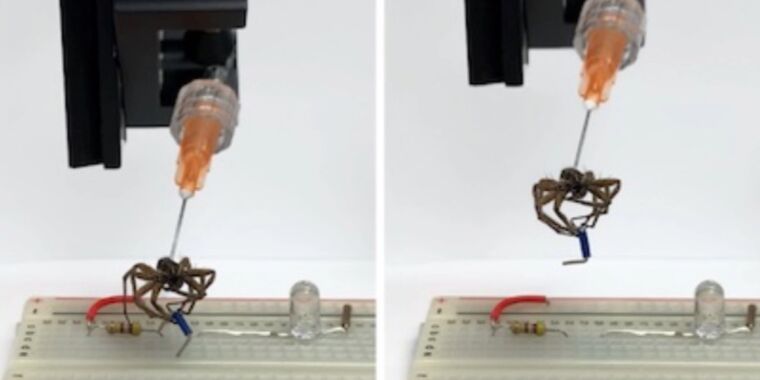 Cereals and grains top of FAO and WHO’s risk ranking

Phoenix-based CNC plasma cutting table retailer adds new products to their inventory for small business and home hobby use. When...

Toyota Research Institute Gill Pratt, Toyota’s Chief Scientist and the CEO of TRI, believes that robots have a significant role...

by by aamer madhani associated press

A sign is seen outside of an Amazon Go store at the Amazon.com Inc. headquarters on 20 May 2021 in...

Dynamic Business brings you the key startup fundraising from this week: Change Financial How much: $5.7 million Participants: new and existing investors...

by etx daily up

NEW YORK, Aug 4, 2022 - (ACN Newswire) - Robotics innovator Beyond Imagination, Inc. has entered into an agreement with...