‘Play with fire and you will get burned’…

by zonia lanz
in World News
Reading Time: 4 mins read
A A
464
SHARES
1.8k
VIEWS
Share on FacebookShare on Twitter

China’s President Xi Jinping warned Joe Biden ‘those who play with fire will get burned’ during a two-hour call Thursday morning amid rising tensions over Taiwan, according to Chinese state media.

The fifth call between the world leaders since President Biden took office comes amid simmering tensions and a potential impending visit to Taiwan from House Speaker Nancy Pelosi.

Biden released an image on Twitter of him in the Oval Office on the phone with Xi.

‘Today I spoke with President Xi Jinping of the People’s Republic of China as part of our efforts to deepen lines of communication, responsibly manage our differences, and address issues of mutual interest,’ he wrote along with the image.

The last time Biden and Xi last spoke was in March of this year – shortly after Russia invaded Ukraine.

Chinese state media released some excerpts from the call, including Xi telling Biden: ‘Those who play with fire will only get burnt. Hope the U.S. side can see this clearly.’

The leader of the People’s Republic of China also said he firmly opposes Taiwan independence and the interference of external forces.

On the other hand, Biden expressed the U.S. stance on the issue has not changed, according to a read out of the meeting.

Xi warned Biden on the call, according to Chinese stat media: ‘Those who play with fire will only get burnt. Hope the U.S. side can see this clearly’

The call comes as Taiwan ramps up its largest ever military drills while neighboring China isn’t pleased with prospective visit to the island by House Nancy Pelosi. Pictured: Taiwanese navy launches a US-made Standard missile from a frigate during the annual Han Kuang Drill, on the sea near the Suao navy harbor in Yilan county on July 2

Self-governed Taiwan’s 23 million people live under the constant threat of invasion by authoritarian China, which views the island as its territory and has vowed to one day seize it, by force if necessary

White House readout of Biden’s Call with China’s Xi Jinping President Joseph R. Biden Jr. spoke today with President Xi Jinping of the People’s Republic of China (PRC). The call was a part of the Biden Administration’s efforts to maintain and deepen lines of communication between the United States and the PRC and responsibly manage our differences and work together where our interests align.

The call follows the two leaders’ conversation on March 18th and a series of conversations between high-level U.S. and PRC officials. The two presidents discussed a range of issues important to the bilateral relationship and other regional and global issues, and tasked their teams to continue following up on today’s conversation, in particular to address climate change and health security.

U.S. military leaders warn of the emerging threat from China and claim that Pelosi’s trip to Taiwan could cause ripple effects.

Taiwan has been ramping up its largest ever military drills as its giant neighbor China bristles over a prospective visit to the island by Speaker Pelosi.

Tensions have been rising recently as Beijing has issued escalating warnings about repercussions should Pelosi’s visit to Taiwan go ahead.

The South China Morning Post reported that Taiwan would have to ‘bear the wrath of Beijing’ should the visit go forward. Beijing is likely to ramp up military pressure on the island during Pelosi’s time there.

‘Possible action includes sending multiple warplanes across the median line that separates the Taiwan Strait,’ said Chieh Chung, a senior researcher at the National Policy Foundation think tank, noting that this happened when former US undersecretary of state Keith Krach visited Taiwan in 2020.

When asked Wednesday about the upcoming trip and whether she plans to go forward with making it, Pelosi said she wouldn’t comment on her movements for security reasons.

‘The Speaker does not comment on her travel plans for a variety of reasons, including security, and neither will I,’ he told reporters.

Beijing says that it would view Pelosi’s visit as a provocation.

While the island of Taiwan governs itself, China considers it part of its territory – leading to heightened tensions in an area already strained by conflict.

‘The president wants to make sure that the lines of communication with President Xi remain open because they need to,’ Kirby told reporters during the White House briefing Wednesday.

Kirby added: ‘This is one of the most consequential bilateral relationships in the world today, with ramifications well beyond both individual countries.’

Chairman of the Joint Chiefs of Staff Mark Milley said over the weekend that China has become significantly more aggressive and a bigger threat to the U.S. and its allies over the last five years.

‘The message is the Chinese military, in the air and at sea, have become significantly more and noticeably more aggressive in this particular region,’ Milley said during a stop in Indonesia on Sunday.

General Milley, during a trip to the Indo-Pacific, said Sunday that the number of intercepts by Chinese aircraft and ships in the region has increased significantly in the last half decade.

He also said the number of unsafe interactions by China against the U.S. and other partner forces has risen by similar proportions.

The U.S. is doubling down on its efforts to strengthen its relationships with Pacific nations as a counterbalance to China as it tries to expand its presence and influence.

The Biden administration considers China its ‘pacing threat’ and America’s primary long-term security challenge – and Milley’s trip to the region was sharply focused on the threat coming from China. 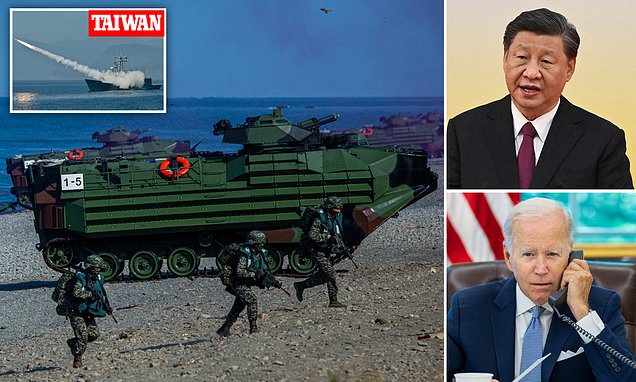 Politico reports that after a brutal year, President Biden ‘is suddenly on the verge of a turnaround’

Politico reports that after a brutal year, President Biden 'is suddenly on the verge of a turnaround'