by tim bissell
in World News
Reading Time: 2 mins read
A A
464
SHARES
1.8k
VIEWS
Share on FacebookShare on Twitter

Protect yourselves at all times. In the context of fighting, whether it’s in the Octagon, gym or street, this really shouldn’t need to be stated.

When someone is trying to take your head off the absolute worst thing you can do is hang your hands by your side. Some people do it because they are tired, others are lacking wisdom and skill and some do it just to show-off — telling their opponent that they don’t think they can hurt them.

Whatever the reason is… just don’t.

Someone who had to learn this lesson the painful way was is Tyson Djone. The Cameroonian pro fighter was once KO’d violently by Russian pro boxer Sergey Vorobiev in sparring, after he dropped his hands.

This happened in 2021, but it’s been making the rounds again. Check out the video below to see for yourself why you should never stick your chin out in the air and beg to get hit.

In the video you can see Djone working with the 18-1 pro Vorobiev, a boxer with a KO rate close to 65% (per boxrec).

The video shows Djone and Vorobiev chatting it up in the gym, mostly in Russian. However, in English, Vorobiev does yell to the camera “protect yourself at all times!”

During the sparring, both men throw leather and land hard shots on each other. At one point Vorobiev catches Djone with a hook, which elicits a strange reaction. Djone, who is not wearing head gear, yells and puffs out his chest. He walks towards Vorobiev with his hands by his hips. Vorobiev throws a three punch combo and Djone falls back as stiff as a board.

Djone takes a hard fall to the canvas and it takes some time before he regains his senses.

Djone has both a pro MMA and pro boxing records. In 2018 he lost to Maksim Davybov by armbar at a Road to M-1 event. Also that year he lost to Maxim Konovalov by KO.

His pro boxing record is 0-2 with both losses coming against Vyacheslav Datsik.

Former MMA fighter Datsik is a Neo Nazi and convicted felon who most recently defeated Antonio ‘Bigfoot’ Silva in a boxing event. 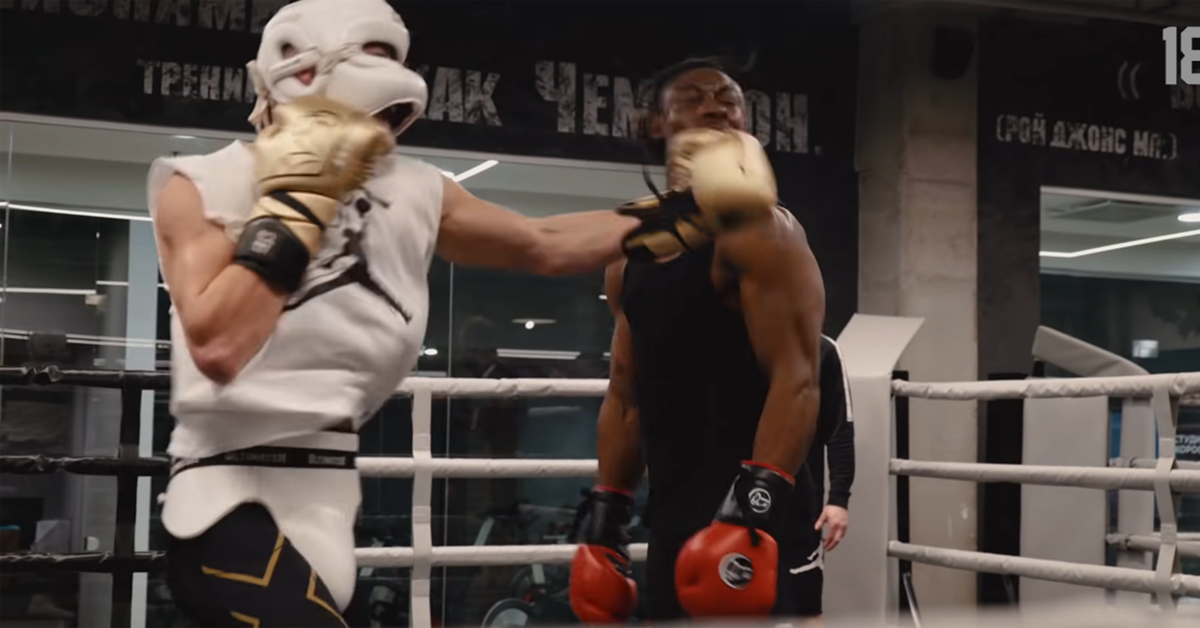