by rubi guillemette
in World News
Reading Time: 2 mins read
A A
464
SHARES
1.8k
VIEWS
Share on FacebookShare on Twitter

In this combination of pictures created on Thursday, Russian Viktor Bout, the alleged arms dealer, looks on while standing in a cell at the Criminal Court in Bangkok on Feb 16, 2010; US WNBA basketball superstar Brittney Griner sits inside a defendants’ cage before a hearing at the Khimki Court, outside Moscow on Wednesday; and Paul Whelan, a former US Marine accused of espionage and arrested in Russia, stands inside a defendants’ cage during a hearing at a court in Moscow on Jan 19, 2019.

A Russian arms trafficker who was arrested in Thailand and is serving a 25-year jail term in the United States knows nothing about a possible exchange with two US prisoners in Russia, his wife said.

US Secretary of State Antony Blinken said on Wednesday that Washington had made a “substantial proposal” to Moscow to free basketball star Brittney Griner and former US Marine Paul Whelan.

He declined to confirm reports that the United States was offering to trade them for convicted trafficker Victor Bout.

Bout, 55, is the highest-profile Russian prisoner serving time in the US and inspired the 2005 arms smuggling movie “Lord of War” starring Nicholas Cage.

He was dubbed the “Merchant of Death” by former British minister Peter Hain for supplying weapons to war-torn Angola and Liberia.

“Victor knows nothing about negotiations between Russia and the United States about his exchange,” Bout’s wife Alla told state news agency RIA Novosti late on Wednesday.

“Of course, we assume that such negotiations might take place but we don’t talk about it because neither he nor I have any information.”

She said she had spoken to Bout the day before and they had mostly discussed their mothers’ deteriorating health.

Bout was accused over several decades of selling weapons to despots in some of the world’s bloodiest conflicts.

The former Soviet air force officer and polyglot was convicted by a US court in 2011 of conspiring to sell arms to Colombia’s FARC rebels.

He was arrested in Thailand in an elaborate sting operation in which US agents posed as FARC rebels seeking an arsenal of modern weapons.

Whelan, a security official at an auto parts company, was arrested in Moscow and sentenced in 2020 to 16 years in prison for espionage, which he denies.

Griner, a two-time Olympic basketball gold medallist, was detained in Russia just days before Moscow launched its offensive in Ukraine on Feb 24.

She has pleaded guilty to drug charges for possessing vape cartridges with cannabis oil. She is now on trial and faces up to 10 years in prison.

Griner’s defence team said it had learnt about the US exchange offer from news reports.

“The defence team is not participating in swap discussions,” lawyer Maria Blagovolina said.

From a legal point of view, an exchange would be possible after the court reaches a verdict on Griner, she said, voicing hope that the US athlete could return home “soon”. 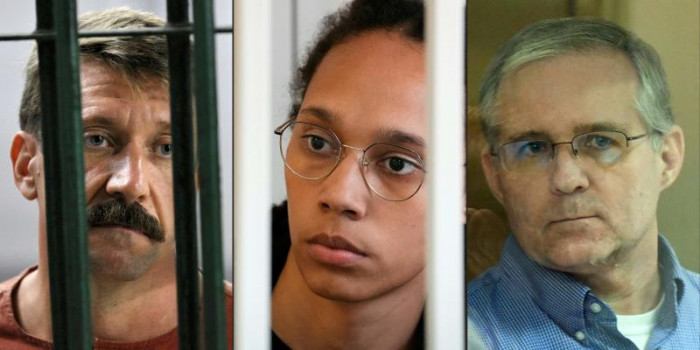