A retired Russian general forced to fight in Ukraine? The fake news story shared by tabloids

by michele wiers
in World News
Reading Time: 5 mins read
A A
465
SHARES
1.8k
VIEWS
Share on FacebookShare on Twitter

In late June, several British and American tabloids published a photo that they claimed showed a retired Russian general named Pavel who had been plucked out of retirement by the desperate Russian army and sent to fight in Ukraine. The articles claimed that this story was proof that Russia doesn’t have enough officers to manage the war in Ukraine. However, as it turns out, the man in this photo isn’t a general and isn’t named Pavel. And there’s no proof that he was sent to Ukraine.

If you only have a minute: Tabloids, mostly British and American, published a photo on June 26 of an overweight man, claiming that he was a retired Russian general named Pavel who was ordered by Russian President Vladimir Putin to fight on the frontlines in Ukraine. They claimed it was proof that Putin is “running out of senior officers” for his war in Ukraine. The FRANCE 24 Observers team, along with other fact-checking outlets, discovered the identity of the man in the photo. His name isn’t Pavel and he isn’t a general. He’s a former border official. And there is no indication that he is currently in Ukraine. The fact check in detail:On June 26, British tabloid The Daily Star published an article claiming that “an obese Russian retired general, 67, has been sent to fight on the frontlines in Ukraine”.

This tabloid cites a “senior intelligence source”, who said: “Most of [Vladimir Putin’s] best and battle-hardened senior commanders have been killed or injured fighting in Ukraine so he is resorting to sending second rate officers to the front who don’t last very long … He is now dragging generals out of retirement and one of those is General Pavel.”

The article includes a photo showing an overweight man wearing camouflage and a green cap. The tabloid claims that this is the man in question – a 67-year-old Russian general named Pavel.

Other tabloids picked up the news. The New York Post tweeted the same photo on June 26 as well as a link to an article about this so-called retired general. The publication garnered more than 2,000 likes.

The problem is that the photo published by these tabloids doesn’t actually show a general named Pavel. Two Belgian fact-checking sites, Knack and VRT, dug into the matter.

Our reporting confirmed what these outlets discovered – the man in the photo is named Ivan Tourchin. He is a border patrol officer, not a retired general. And he’s 58, not 67. Moreover, there is no evidence on social media or in the press that he was sent to Ukraine.

PimEyes software was used to identify two men in this photo. © The Observers

Belgian fact-checking outlet VRT identified the man at the left in this image as Dmitry Litvinov, the head of municipal administration in the district of Yelansky in the Volgograd Oblast in southwestern Russia.

Alexander Bondarenko, an official in the same district, stands next to him in this photo.

There are several men wearing green caps with a gold logo who also appear in the photo. A Google search revealed that these hats are worn by Russian border officials.

Our team looked for other images of this same scene by typing “Yelan” – the name of the main city in the Yelansky district where the two men in the photo live and work – and “border guards”.

This Google search pulled up a similar image (see below, at right) in an article published by the Russian media. The photo features the same man wearing camouflage. The paving stones on the ground are the same as in the original image, as is the monument behind him. It is almost certainly the same occasion.

Side by side, you can see the photo published by the Daily Star (L) and the photo of the commemoration held by border force veterans in Yelan last May. © The Observers

According to this article published by a Russian media outlet, this scene took place during a commemoration held by veterans of the border force on May 27 in a park in Yelan, on a Russian public holiday celebrating border guards.

Other photos of the same ceremony were published on the Telegram channel of the district of Yelan. Again, you can see the same man who appeared in the photo published by the tabloids.

To uncover this man’s identity, we ran the words “border guards” and “Yelan” through the search engine Yandex. We pulled up a group created on the Russian social network Odnoklassniki called “Border Guards in the Yelanskiy district and the Vologograd region”.

There are a bunch of images of the man in camouflage shared in this group. In several images, he is identified as “Ivan Tourchin”. There is even a link to his personal account (check it out here).

Ivan Tourchin also has another account on Odnoklassniki (check it out here).

One of Tourchin’s two accounts on Odnoklassniki provides more information about him. He is supposedly 58 years old (and not 67, as the tabloids claimed). On one of the accounts, he says he lives in Djizak, a town in Uzbekistan. Another account says he is based in Yelan, Russia.

In either case, he doesn’t seem to live in a “suburb of Moscow”, as the Daily Star claimed.

From the photos and comments on his profile, we were able to deduce that he grew up in Yelan. He trained in Yelan, then worked as a border guard in Djizak, Uzbekistan, before retiring in 2010.

Conclusion: No, the photo published by numerous tabloids doesn’t show a retired general named Pavel who is 67 years old. The man wearing camouflage in the photo is named Ivan Tourchin and he is 58 years old. Tourchin does not seem to live in Moscow.

Turns out, Ivan Tourchin is very active on social media. He continued to post after the article appeared in the Daily Star. He never mentions travelling to Ukraine.

Our team also investigated whether there actually was a retired Russian general named Pavel who was sent to Ukraine recently – thinking that the story could be true, even if the wrong photo was linked to the story. However, we found no leads or information about this. 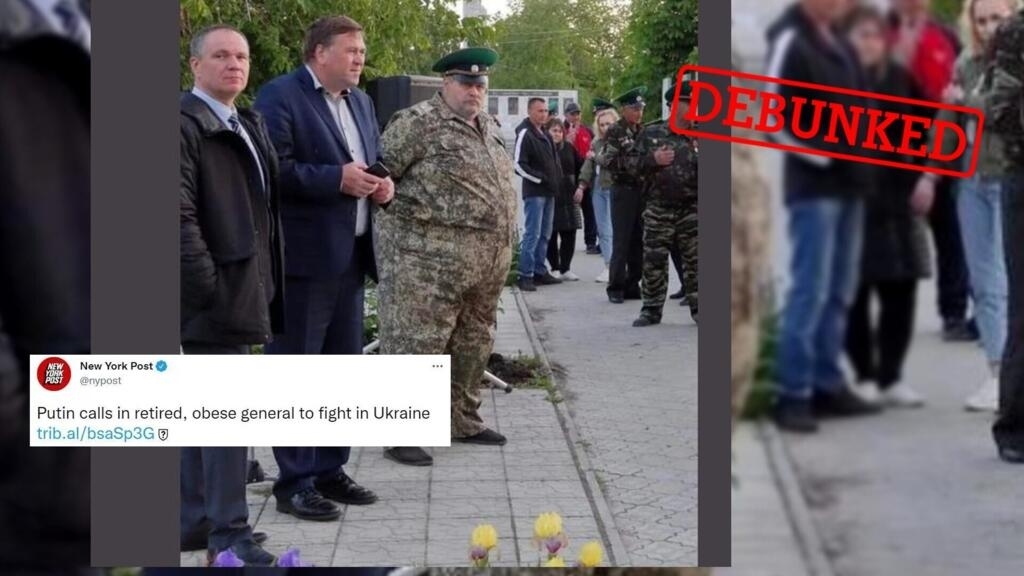