by jeanice culton
in World News
Reading Time: 3 mins read
A A
464
SHARES
1.8k
VIEWS
Share on FacebookShare on Twitter

“It’s very important that yourselves, students from many other countries, would pass on this message to their respective countries to pressure their political management to give Ukraine what it needs,” he said.

“With your actions, please do not allow anyone somewhere on the hierarchy of bureaucratic corridors to forget about what’s going on in Ukraine, to forget about war. Please don’t become tired because of the war.”

He said students can go to rallies and use social media accounts and communication with their friends to remind people of what’s been happening in Ukraine for nearly four months.

Speaking over a video link, Zelenskyy was greeted with a standing ovation by about 250 people who attended the event at University of Toronto’s Munk School.

He later answered questions from students on different topics including the role of internet and social media in the war, how international organizations can be improved to prevent similar conflicts and the future of Ukraine.

Speaking at the event, Deputy Prime Minister and Finance Minister Chrystia Freeland said Canada has committed $1.87 billion in financial assistance to Ukraine, of which $1.5 billion has already been delivered to the country.

“That is more than any other country has managed to send into the bank account of the government of Ukraine,” she said.

“I want to say to President Zelenskyy – and I want to saytoVladimir Putin, who I think is probably listening to us as well – that for as long as it takes Canada will be there for Ukraine,” she said.

“We will persist. We will not tire.”

University of Toronto president Meric Gertler said the institution has a “special connection” with the Ukrainian president, who visited campus in 2019 for an international summit on the future of his country.

Last month, the university announced a program to welcome more than 200 students whose studies were disrupted by the war.

Kateryna Nekhomiazh, a Ukrainian exchange student who was among a group of 20 that arrived in May to study at the University of Toronto, said her family is relatively safe now in the Ukrainian capital.

“I don’t know when is going to be the last time I talk to them. There aren’t any troops in Kyiv but there are bombs,” she said in an interview.

She said people in the eastern and southern parts of Ukraine, including some of her friends’ families, are struggling to survive.

“They have really hard times. (The) world should know about it and not forget,” she said.

“Every time I read news, I watch videos, about what’s happening, I’m grateful to God, to the university, that I’m safe, but I really want everyone to be safe.”

Luis Sanchez, an international relations student at University of Toronto, said he felt moved and inspired after watching the Ukrainian president speak.

“A lot of people may feel the war fatigue. A couple months ago maybe it was more prominent on the news,” he said, “Seeing Zelenskyy be able to sort of address the live audience especially in Canada sort of brings back how urgent this is.”

This report by The Canadian Press was first published June 22, 2022. 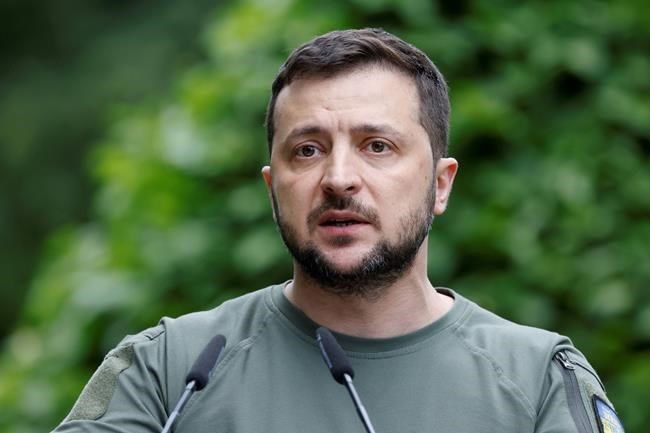 The Government has warned that a complete shut-off of Russian gas supplies to Europe cannot be ruled out, as it...

Author of the article: Reuters Tom Balmforth and Max Hunder KYIV — Russian forces set their sights on their next...

Russian troops are ratcheting up their efforts to secure full control of the entire Donbas area in eastern Ukraine -...