by raleigh catt
in COVID-19
Reading Time: 2 mins read
A A
464
SHARES
1.8k
VIEWS
Share on FacebookShare on Twitter

Covid-19-infected people with mild symptoms drive in and get Covid-19 medicines at a Drive Thru service at a public van station in Pathum Thani’s Thanyaburi district. (Photo: Apichit Jinakul)

The World Health Organization (WHO) has issued a warning over the emergence of three Omicron sub-variants that have the potential to transmit Covid-19 faster and infect the lungs, says the Ramathibodi Hospital’s Center for Medical Genomics (CMG).

Sub-variants BA.4, BA.5 and BA.2.12.1 may cause more severe infections than the Omicron strain, it said on its Facebook page.

CMG said the WHO and many scientists around the world had been monitoring the three sub-variants in South Africa and the United States for weeks.

Last month, South African scientists identified BA.4 and BA.5 there and laboratory experiments showed the strains can reinfect those who had the original Omicron strain, the centre said.

Figures showed a rise in the number of patients infected by the sub-variants admitted to hospitals in the two countries, it said. However, there has not been an increase in fatalities, it said.

It said that a change in the virus’ spike gene was the reason for the higher transmission rate, noting the virus can lodge into a cell wall of the lungs to cause an infection similar to that of the Delta variant. Some reports said the sub-variants had the capacity to dodge vaccines.

The figures did not include 10,055 positive results from antigen tests over the past 24 hours. Doing so would raise the total daily number to 18,136.

On Saturday morning, the kingdom recorded 8,450 new cases and 58 fatalities.

As of Saturday, a total of 91,279 people were receiving Covid-19 treatment, including 29,346 in hospitals, the ministry said.

It said 10,382 people were in hospitels and field hospitals while 51,172 were at home and community isolation centres.

The Center for Covid-19 Situation Administration (CCSA) said all but four of the 8,081 new cases were transmitted in the country.

The four imported cases were two from Israel, and one each from Japan and the United States, the ministry said.

On Saturday, 10,588 Covid-19 patients were discharged from hospitals after recovering from Covid-19.

According to the CCSA, the 54 people who died were aged from eight months to 95 years old with an average age of 75. All were Thais.

Bangkok logged two new deaths and no fatalities were reported in its adjacent provinces. 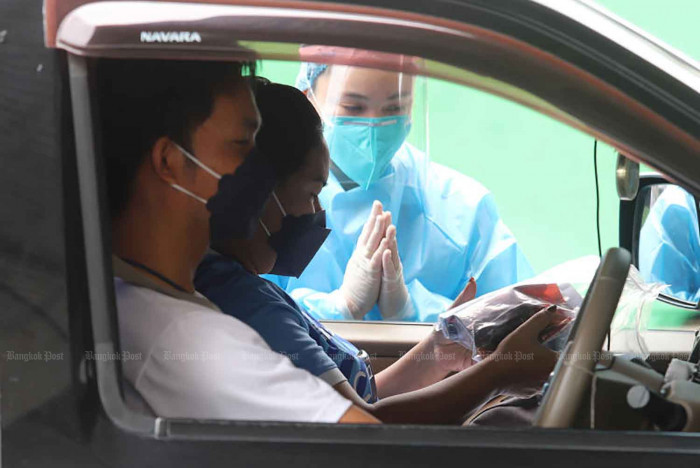