U.S. sending diplomats back to Kyiv embassy to coincide with Russia’s Victory Day

by samatha mischke
in World News
Reading Time: 2 mins read
A A
464
SHARES
1.8k
VIEWS
Share on FacebookShare on Twitter

Washington — A group of American diplomats returned to the U.S. Embassy in Kyiv for the first time in nearly three months on Sunday, traveling to the Ukrainian capital one day before Russia’s Victory Day commemorations, when the country marks the defeat of Nazi Germany in World War II.

“Just arrived in Kyiv! Delighted to be back on Victory in Europe Day. Slava Ukraini! We #standwithUkraine,” Kristina Kvien, the U.S. charges d’affair, wrote on the embassy’s Twitter account. The U.S. and the West celebrate the end of World War II in Europe on May 8, while Russia and many former Soviet republics recognize May 9 as the end of the war.

The U.S. diplomats’ return to the embassy was meant to underscore Russian President Vladimir Putin’s failure to capture the Ukrainian capital early in the conflict, which has now transformed into a grinding war of attrition in the country’s south and east. State Department sources said the embassy hopes to fully resume operations at the embassy in Kyiv and raise the American flag there in the coming weeks.

The move is part of the U.S. effort to counteract Russian propaganda surrounding the conflict, which the U.S. expects to see from the Kremlin on May 9, one U.S. official told CBS News.

“The Russians will do everything they can to use the date in terms of their propaganda effort,” State Department spokesman Ned Price told reporters last Monday. “I am quite confident you’ll be hearing more from the United States, from our partners, including our NATO partners, in the lead-up to May 9 as well.”

The United States Embassy to Ukraine stands closed on April 25, 2022 in Kyiv, Ukraine.

Putin falsely claims that the invasion of Ukraine — what he has called an ongoing “special military operation” — is an effort to remove Nazis from power there.

The Biden administration withdrew American diplomats from Kyiv on February 12 in order to avoid the risk of potential fatalities that would threaten to draw the U.S. directly into the conflict.

U.S. diplomats were evacuated first to the western Ukrainian city of Lviv, closer to the border with NATO ally Poland, ahead of Russia’s invasion on February 24, and then taken out of the country as the war intensified. Embassy staff began making day trips back to Lviv early last week in order to be able to work with Ukrainian counterparts from there. Russian forces pulled back from Kyiv and the surrounding region at the beginning of April.

President Biden joined a call with the leaders of the Group of 7 countries on Sunday, with Ukrainian President Volodymyr Zelenskyy participating. The U.S. announced new sanctions targeting Russia for its invasion, and the G-7 nations committed to “phase out our dependency on Russian energy, including by phasing out or banning the import of Russian oil,” the countries said in a joint statement after the call.

Camilla Schick contributed to this report. 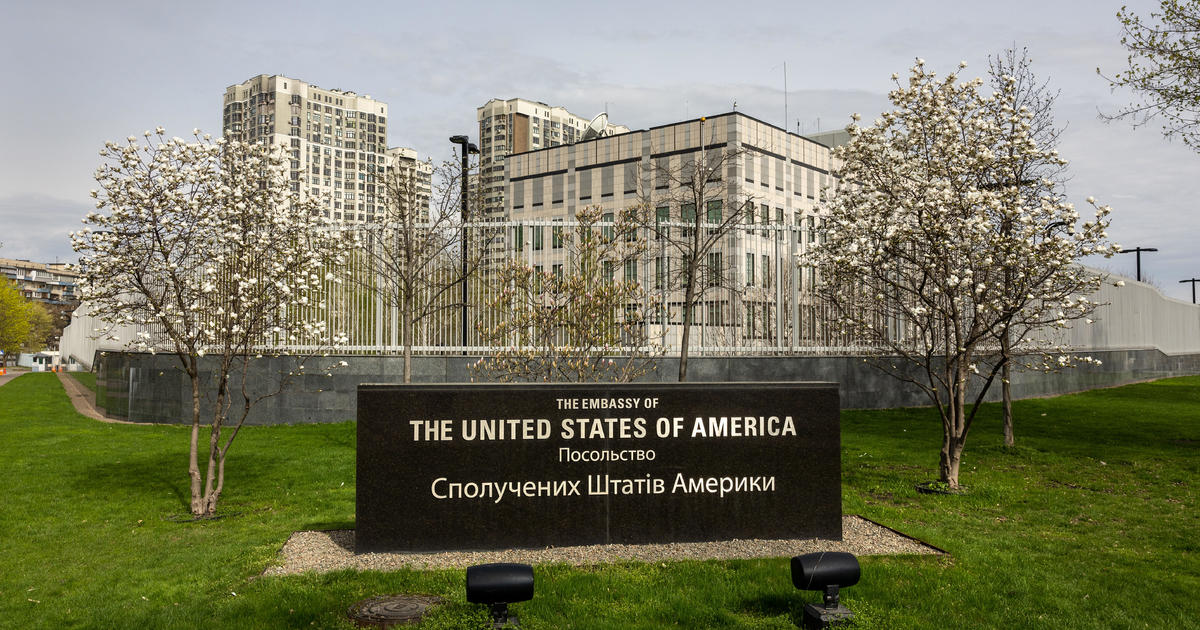