by georgianna klemp
in Africa News
Reading Time: 5 mins read
A A
465
SHARES
1.8k
VIEWS
Share on FacebookShare on Twitter

On the night of May 15-16, the attention of millions of people will be drawn skyward, where a mottled, coppery globe — the moon — will be completely immersed in the long, tapering cone of shadow cast into space by our planet. If the weather is clear, skywatchers across most of the Americas, Europe and Africa will have a view of one of nature’s most beautiful spectacles: a total eclipse of the moon.

Unlike a total eclipse of the sun, which often requires a long journey to the path of totality, eclipses of the moon can usually be observed from your own backyard. The passage of the full moon through Earth’s shadow is equally visible from all places within the hemisphere where the moon is above the horizon. The totality phase of the upcoming total lunar eclipse of May 2022 will be visible across much of North America, all of South America, Central and Western Europe, and much of Africa (except the extreme eastern part), giving it a potential viewing audience of 2.7 billion people!

It’s simple to view this celestial spectacle. Unlike a solar eclipse, which necessitates special viewing precautions to prevent eye damage, a lunar eclipse is perfectly safe to watch. All you’ll need are your eyes, but binoculars or a telescope will give you a much nicer view.

Related: How to watch the total lunar eclipse of May 2022 online

Shadow play The eclipse begins when the moon enters the penumbra, or faint outer portion of Earth’s shadow, about an hour before it begins moving into the umbra, Earth’s dark inner shadow. The penumbra, however, is all but invisible to the eye until the moon becomes deeply immersed in it. Sharp-eyed viewers may get their first glimpse of the penumbra as a faint “smudge” on the left part of the moon’s disk at or around 10:10 p.m. EDT on May 15 (0210 GMT on May 16), as long as the moon is above the horizon.

The most noticeable part of this eclipse will come when the moon begins to enter the umbra. A small scallop of darkness will start to appear on the moon’s lower left edge at 10:28 p.m. EDT on May 15 (0228 GMT on May 16).

The moon is expected to take 3 hours, 27 minutes and 58 seconds to pass completely through the umbra.

Show is already in progress at moonrise

A NASA visibility map for the May 15, 2022 total lunar eclipse. (Image credit: NASA’s Scientific Visualization Studio)While viewers in much of the eastern and central U.S. and Canada will be able to see the moon enter the umbra, those in western North America, to the left of a line running from roughly San Diego; to Salt Lake City; to Billings, Montana, to The Pas, Manitoba, will see the moon rise already in eclipse.

In the table below, information for eight North American cities gives the time of local moonrise and the percentage of the moon’s diameter already immersed in Earth’s umbra at that time.

It should make for an interesting scene to see the moon coming up over the east-southeast horizon already partly immersed in Earth’s dark shadow. If there are local landmarks in the foreground, it can make for a spectacular photo op.

Related: How to photograph a lunar eclipse

Totality arrives   For locations where the moon remains above the horizon throughout, the totality phase of the eclipse will last 85.5 minutes, beginning around 11:28 p.m. EDT on May 15 (0328 GMT on May 16). During totality, although the moon will be entirely immersed in Earth’s shadow, it likely will not disappear from sight. Rather, the moon will appear to turn a coppery red, an effect caused by Earth’s atmosphere bending or refracting sunlight into the shadow. Because Earth’s umbral shadow is cone-shaped and extends into space for some 864,000 miles (1.39 million kilometers), sunlight will be strained through a sort of “double sunset,” all around the rim of Earth, into its shadow and then onto the moon.

At the moment of mid-totality (0412 GMT, or 12:12 a.m. EDT), the moon will stand directly overhead from Sucre, Bolivia. The moon will move through the southern part of the umbra, according to EclipseWise, so at mid-totality, the upper half of the moon will appear darkest — perhaps a deep reddish-brown or chocolate — while the southern half will appear a brighter hue of red or even coppery orange. But exactly how the moon will look will depend on the clarity of Earth’s atmosphere at the time of the eclipse.

Interestingly, for places west or to the left of a line running from near Lincoln City, Oregon, to Edmonton, Alberta, the moon will appear to rise in total eclipse. Because of low altitude and bright evening twilight, observers in these locations may not see much of the moon at all until the twilight sky sufficiently darkens or, if the sky is unusually hazy, it begins to emerge from Earth’s shadow. Similarly, from Hawaii and southeastern Alaska, totality will be ending, or will have already ended at moonrise, so the main show may be the emergence of the moon from the umbral shadow as it ascends in the southeast sky.

Conversely, the moon will be setting in total eclipse across portions of East Central Africa and West Central Europe. Because of low altitude and bright morning twilight, observers in these locations may not see much of the moon at all after it slips completely into Earth’s shadow.

The last total lunar eclipse occurred on May 26, 2021, with a very short (less than 16-minute) totality, visible primarily from Central and Western portions of North America.  The last widely observable lunar eclipse visible from the Americas, dubbed the Super Blood Wolf Moon eclipse, happened on Jan. 20-21, 2019.

Should unsettled weather block your view of the upcoming eclipse, there is at least some consolation in knowing that another total lunar eclipse will be widely visible over most of the Americas during the early morning hours of Nov. 8.

Editor’s Note: If you snap an amazing lunar eclipse photo and would like to share it with Space.com’s readers, send your photo(s), comments, and your name and location to [email protected]

Joe Rao serves as an instructor and guest lecturer at New York’s Hayden Planetarium. He writes about astronomy for Natural History magazine, the Farmers’ Almanac and other publications. Follow us on Twitter @Spacedotcom and on Facebook.

Joe Rao is Space.com’s skywatching columnist, as well as a veteran meteorologist and eclipse chaser who also serves as an instructor and guest lecturer at New York’s Hayden Planetarium. He writes about astronomy for Natural History magazine, the Farmers’ Almanac and other publications. Joe is an 8-time Emmy-nominated meteorologist who served the Putnam Valley region of New York for over 21 years. You can find him on Twitter and YouTube tracking lunar and solar eclipses, meteor showers and more. To find out Joe’s latest project, visit him on Twitter. 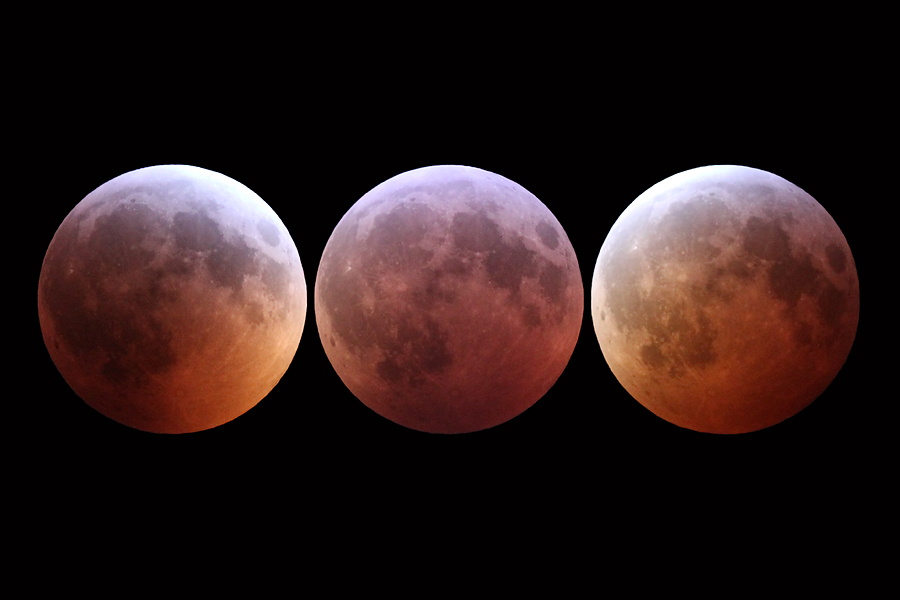 Blood Moon total lunar eclipse 2022: Everything you need to know