by gtonline
in World News
Reading Time: 2 mins read
A A
464
SHARES
1.8k
VIEWS
Share on FacebookShare on Twitter

United Nations (UN) chief, António Guterres, has told the BBC he does not support the UK’s plan of giving asylum seekers a one-way ticket to Rwanda – something also being considered by Denmark.

“I do believe that Europe has responsibilities in relation to asylum that are in the core of European values and European tradition and are by the way the fifth UN convention, which is part of international law.

“I was never a supporter of outsourcing the protection of refugees and especially to do it to a much poorer country, where the prospective of integration and of a future are of course much less hopeful.”

The UN secretary general gave the interview at the end of his three-nation tour of West Africa, visiting Senegal, Niger and Nigeria.

He pointed out that Africa was the continent that was suffering most in the aftermath of coronavirus and now the war in Ukraine.

“Let’s not forget that Africa was the continent that was growing fastest in the world in the 10 years that proceeded those crises. Then came the Covid – and Africa practically didn’t get any vaccines.

“This is one of the most immoral sources of inequality that I have witnessed in my life.”

He hit out over the fact that Africa was given no debt reduction to help it recover from the pandemic.

With dramatic price increase on food, fertiliser and energy because of Russia’s invasion of Ukraine, Mr Guterres said there were areas of the continent where people were in danger of starving.

“Many of the countries have no fiscal space to buy what is needed to support the population – and we risk to have famine in several parts of Africa if this is not properly addressed.”

He said this was why the UN had just launched The Global Crisis Response Group on Food, Energy and Finance (GCRG) to support such nations. -BBC 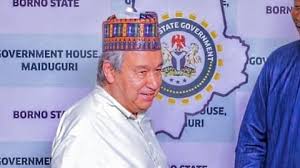