Another Russian Warship Is Burning In The Black Sea

by michael peck
in World News
Reading Time: 3 mins read
A A
473
SHARES
1.8k
VIEWS
Share on FacebookShare on Twitter

A Russian frigate is on fire in the Black Sea after being hit by Ukrainian missiles, according to Ukrainian media.

The ship is reportedly a frigate-sized vessel, possibly the Admiral Makarov, one of Russia’s newest and most advanced frigates. The 4,000-ton vessel is one of the largest warships in Russia’s Black Sea Fleet, which is a key part of Russia’s invasion of Ukraine.

The stricken frigate is currently near Snake Island, which is about 75 miles south of Odessa. “Enemy aircraft are now circling over this area of ​​​​the Black Sea, and rescue ships have come out to help the ship from the temporarily occupied Crimea,” Dumskaya said.

Independent sources suggest that the Ukrainian reports are at least partly accurate. “It’s seeming more and more likely that the claims about the Russian frigate Admiral Makarov being stuck by Ukrainian anti-ship missiles off the coast of Odessa are true,” reports OSINTdefender, an open-source intelligence site on Twitter. “Multiple rescue ships and aircraft are reportedly in the area, with U.S. surveillance drones keeping eyes on it.”

A U.S. Air Force RQ-4B Global Hawk surveillance drone – call sign Forte11 — was patrolling the Black Sea at press time, according to flight tracker RadarBox. That particular drone – a high-altitude UAV that can stay aloft for more than 24 hours – has been frequently surveilling the Black Sea since the Ukraine conflict began, so it is unclear if the current flight is specifically related to the reported sinking.

The Russian government denied reports that another warship has been hit. “No, we do not have such information,” said Russian presidential spokesman Dmitry Peskov, according to Russia’s RIA Novosti news service.

Given the fog of war – and wartime propaganda – it’s tough to be certain to what happened at this point. But past history suggests that Ukraine has the capability to sink Russian ships, and that Russia will deny this ever happened.

Just last month, Ukraine claimed the cruiser Moskva was sunk by two Neptune missiles, a claim that has been supported by Western analysts. Russia maintains that the was stricken by an accidental fire in an ammunition magazine. While Russia and the Soviet Union have a history of maritime disasters, it seems far more likely that the 11,000-ton Moskva — flagship of the Black Sea Fleet – succumbed to hostile action in a war zone.

Either way, if another Russian warship was indeed badly damaged or sunk, it’s another black eye for Russia’s military prowess and prestige. In addition to the Moskva, an Alligator-class landing ship was sunk by Ukrainian fire in March.

While the Admiral Makarov may be far smaller than the Moskva, it’s a powerful vessel armed with eight vertical launch cells for Kalibr and other cruise missiles, 24 Buk anti-aircraft missiles, plus short-range air defense cannon and anti-submarine rockets. The Russian Navy operates three – or perhaps now two – Admiral Grigorovich-class frigates, with 10 similar vessels either completed or under construction for India as Talwar-class vessels.

Ukraine’s Neptune is a subsonic anti-ship missile with a range of about 175 miles. Though based on the Cold War Soviet Kh-35 missile, and slower than modern supersonic and hypersonic missiles, it is still a formidable coastal defense weapon when employed by land-based batteries.

However, long-range weapons depend on accurate real-time intelligence on a target’s location. The U.S. government has acknowledged that it had provided targeting information to Ukraine on the Moskva’s identity and position, though Washington denies that it knew of the Ukrainian attack plan. If another Russian ship was hit by missiles while sailing far off the Ukrainian coast — especially if a U.S. Global Hawk drone was in the area — then Moscow is bound to ask questions.

For Ukraine, destroying Russian warships may deter the Russian Navy from operating too close to the Ukrainian coast, thus depriving Russia’s battered ground forces of amphibious support as well as close blockade of Ukrainian ports.

Even sweeter, sinking the Admiral Makarov revenge against a ship that probably launched cruise missiles at Ukrainian cities. For the Russian Navy, it’s history repeated. The frigate’s namesake, Admiral Stepan Makarov, commanded a Russian fleet during the Russo-Japanese War of 1904-1905. He was killed when his flagship was sunk by a mine, and his fleet eventually wiped out by the Japanese. 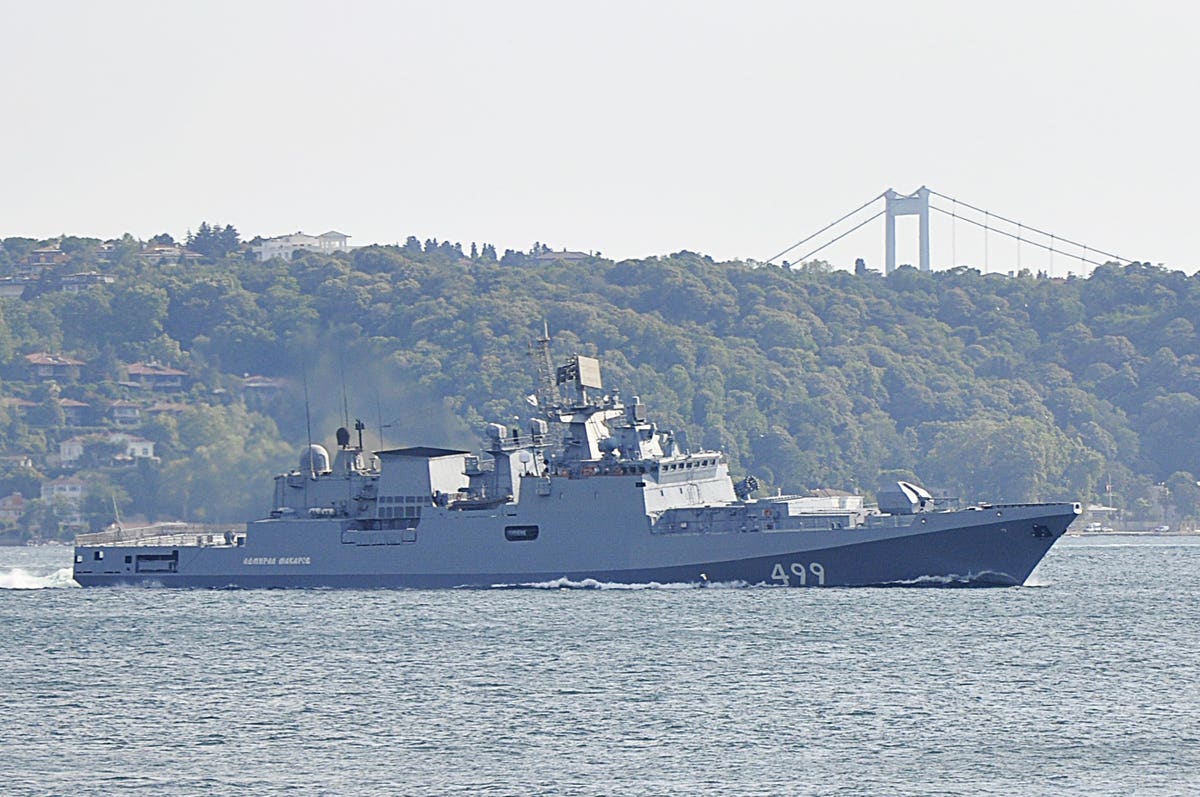