by olugbenga ige
in World News
Reading Time: 2 mins read
A A
464
SHARES
1.8k
VIEWS
Share on FacebookShare on Twitter

The Nigerian leader received the UN Chief at the forecourt of the State House before leading him to the executive room to have a closed-door meeting.

It is understood that the two leaders discussed issues surrounding Boko Haram/ ISWAP activities and the humanitarian crisis in the North East and other regions.

Briefing State House correspondents after their meeting, Buhari commended the UN scribe for the visit to the country at a time the world’s attention is focused on the Russia-Ukraine war.

President Buhari stressed the importance of the world body in the fight against terrorism and its role in addressing the humanitarian crisis in the North East region.

Guterres, who had earlier paid similar visits to neighbouring Niger Republic and Senegal, said his visit was in solidarity with victims of terrorism, adding that he was forced to postpone his visit to Nigeria because of the war in Ukraine.

The UN chief pointed out that Nigeria would be able to defeat terrorism with the way the Nigerian troops are crushing the terrorists.

Meanwhile, the UN scribe is also expected to perform the wreath-laying ceremony in honour of the August 26, 2011, suicide bomb attack victims.

Recall that the UN Scribe, who is on a two-day visit to Nigeria, had earlier backed the reintegration of repentant terrorists in the North East.

Guterres stated that the move will help achieve peace in the region and will allow displaced persons in camps to return to their homes.

He made this known on Tuesday while speaking with reporters after visiting an Internally Displaced Persons (IDPs) camp in Gubio village and another camp built for repentant insurgents in Maiduguri. 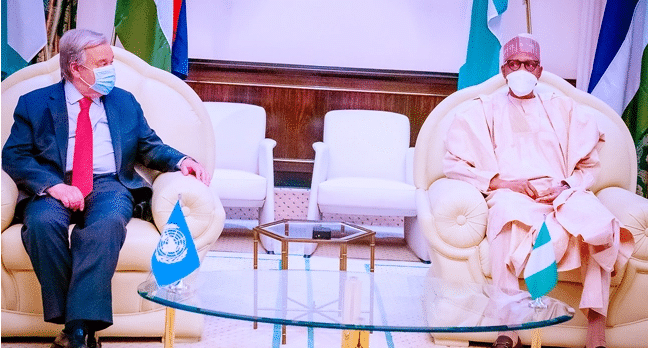