by ronan mcgreevy
in World News
Reading Time: 2 mins read
A A
464
SHARES
1.8k
VIEWS
Share on FacebookShare on Twitter

Members of the Ukrainian community in Ireland have called on the Government to ban proposed rallies this weekend in support of Russia’s war in Ukraine.

Rallies planned for the Phoenix Park on May 7th and 8th and a motor cavalcade planned for the M4/M6 motorways on May 8th have been described by Ukrainians living in Ireland as a “humiliation of human dignity and ethnic values which are at the core of our identity”.

Countries of the former Soviet Union traditionally celebrate May 8th and 9th every year to mark the Allied victory over Nazi Germany in the second World War.

In a statement on the proposed events, a support group for Ukrainians in Ireland noted Russia and Ukraine had a common history in fighting the Nazis.

It accused Russia of “nationalising the victory” and “deliberately trying to distort the historical truth by downplaying the contribution of other nations to the struggle against Nazism”.

The group said Russians who enjoyed freedoms in Ireland that they would not enjoy at home are abusing those freedoms to stage rallies.

They called for no repeat of the “illegal barbarian cavalcade” around Dublin on April 10th, clips from which were later uploaded on to social media. Those clips clearly showed motorists waving the Russian flag while one motorist had the letter Z painted on his car bonnet.

It also asked for Ireland to follow the lead of countries including Latvia, Estonia, Germany and Poland in banning the letter “Z” when it is used as a symbol to support the war in Ukraine.

The group stated: “We hereby appeal to human values, to the authorities of the country that protected us and became a second home for many, Ireland, please support us to stop this parade which is nothing more than another malicious attempt by Russian propaganda to poiZon (sic) people’s minds and spread doubt.

“How can this abnormal parade in the name of violence be allowed when there are legal ways to ban it?”

Russia’s actions against Ukraine were a “crime against humanity”, the Taoiseach said, adding that there can be no equivocation about that or “ambivalence about that”.

Separately, a group called Ukrainian Action is holding a march for peace starting at midday on Sunday from the GPO in O’Connell Street, Dublin.

A spokeswoman for An Garda Síochána said the force “does not comment on proposed events”.

She added: “An Garda Síochána will implement an appropriate and proportionate policing plan if required.” 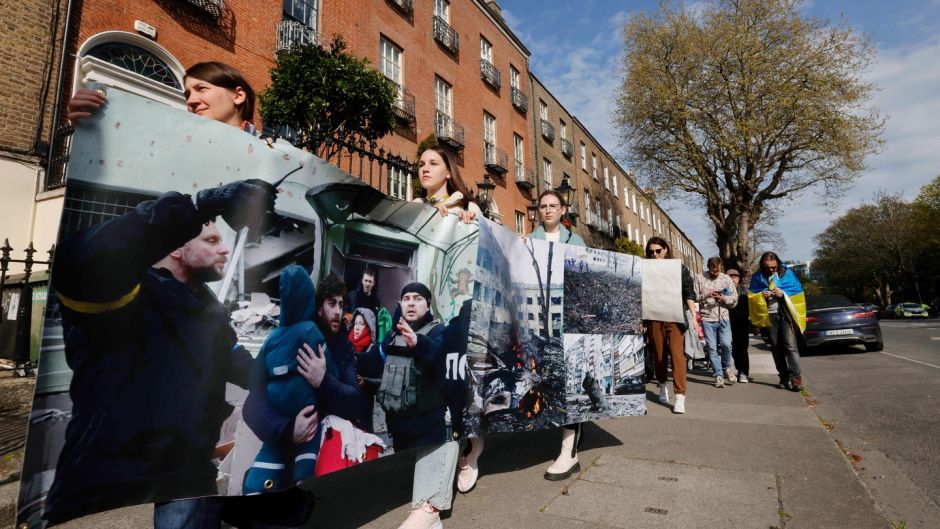