by nick ciolino
in World News
Reading Time: 2 mins read
A A
464
SHARES
1.8k
VIEWS
Share on FacebookShare on Twitter

President Joe Biden told reporters on Monday he would meet “today” with the parents of American journalist Austin Tice, who was abducted in Syria 10 years ago.

Austin Tice was covering the Syrian civil war when he vanished en route to Lebanon in 2012. Five weeks later, a video emerged showing him blindfolded and held by armed men. The meeting with his parents, Marc and Debra Tice, is expected to take place at the White House.

Debra Tice was introduced on Saturday night at the White House Correspondents’ Association Dinner during an address by CBS News reporter Steven Portnoy.

“Mr. President, at table 48 tonight is a woman named Deborah Tice,” Portnoy said. “Mrs. Tice, would you please stand? Now, Mrs. Tice’s son, Austin, is a colleague of ours at The Washington Post at McClatchy and at CBS. And he should be here with us tonight, but he’s been held captive in Syria since 2012.”

Biden said at the event that he wanted to meet with the Tices.

“After the president made those comments, obviously we went into action to work to set up the meeting on Sunday,” White House press secretary Jen Psaki said at Monday’s press briefing.

Tice is from Houston. His work had been published by The Washington Post, McClatchy newspapers, The Associated Press, and other outlets.

In the final months of the Trump administration, two U.S. officials—including the government’s top hostage negotiator, Roger Carstens—made a secret visit to Damascus to seek information on Tice and other Americans who have disappeared in Syria. It was the highest-level talk in years between the United States and the government of Syrian President Bashar Assad, though Syrian officials offered no meaningful information on Tice.

Debra Tice has previously been critical of her lack of direct White House access, saying at a National Press Club event last December that she had never met with Biden since he became president and that “he has never said Austin’s name publicly.”

Joan Chang and The Associated Press contributed to this report. 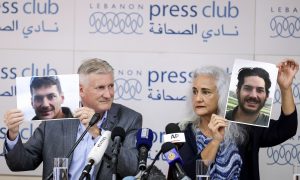