Too many disabled children still fall through schooling gaps

by eunice stoltz
in Africa News
Reading Time: 6 mins read
A A
465
SHARES
1.8k
VIEWS
Share on FacebookShare on Twitter

Society dictates how people behave, and those that don’t behave accordingly are  frowned upon. So says 50-year-old Justine Quinn, who is well versed in behaviour deemed “outside of the norm” — or on a different spectrum.

Doing shopping is an “outing” for the family, Quinn tells Mail & Guardian. “I’m an absolute walking circus,” she says, given that her 13-year-old daughter, Isabella, “just wants to talk to everybody and hug everybody and tell them about Disney”.

Cillian is non-verbal and uses a wheelchair. Isabella is verbal. She started walking when she was about three-and-a-half years old. Although Isabella is not “full-blown autistic” she is on the autism spectrum, Quinn says.

When people approach her with “sympathetic expressions”, says Quinn, or say, “Oh, shame”, she whips out a card she carries with her explaining what autism spectrum disorder and cerebral palsy are, “to educate people”.

In 2010, amid a difficult period where Cillian underwent various operations, Quinn learned she was pregnant with twin boys, Lorcan and Riordan. She describes them as “normal, naughty 11-year-old boys, chalk and cheese”.

There are 4 684 learners between Grade R and Grade 12 who have been diagnosed with autism spectrum disorder (ASD) in Western Cape schools, according to Millicent Merton, the communication officer for the province’s education department.

Merton told the M&G that there is a need for schools that primarily focus on children diagnosed with ASD. Currently, the province has 20 public and nine private schools that specialise in teaching children with autism.

“The [department] has just started a new school and is establishing satellites of existing schools. In addition, there are four ASD outreach teams that are building capacity and supporting learners in full-service ordinary schools. The aim is to empower educators to support ASD learners within all sectors of education.”

Mduduzi Dube, the managing director of Autism Western Cape, agreed with the department that those within the disability sector — which includes ASD — were “underserviced, understaffed and underfunded.”

“To simply say that we are striving toward inclusion is no longer enough. We have to implement these inclusive strategies and make it our priority to preserve the rights and the dignity of the people that we serve, so they too can live meaningful and productive lives. If an autistic child or adult is not receiving adequate access to services, they cannot be provided [with] the capabilities to reach their full potential.”

Autism Western Cape was experiencing an increase in ASD referrals and the need for psychosocial support in families, Dube told the M&G.

Globally one in 44 children is diagnosed with autism. This represents an annual increase of between 10 and 15% in the diagnostic rates, according to statistics cited by Dube.

The rise in ASD diagnoses was reflected at the grassroots level for organisations such as Autism Western Cape, which “works within the community and liaises directly with allied healthcare practitioners in the field”.

According to Quinn, there are only two schools in the province that accommodate children with cerebral palsy, one of which Isabella and Cillian had attended in the past.

On a national level, the picture of the shortage of inclusive education for persons diagnosed with ASD — and those living with disabilities — is similar.

At the start of April, the beginning of World Autism Month,  M&G reported that the Equal Education Law Centre called out what it described as the “tragic lack of political will to realise the vision of an inclusive education in South Africa [which] has resulted in two decades of learners being denied their right to quality inclusive education”.

Early intervention: Justine Quinn says her children (from left) Cillian, Isabella, Riordan and Lorcan all work hard, and those living with disabilities must be helped to attain their potential. (David Harrison)

In a report published at the beginning of March, the public interest law centre found that inclusive teaching and learning in South Africa had not met the objectives in Education White Paper 6, Building an Inclusive Education System — a 20-year implementation plan that ended in 2021. The plan includes education for all learners, irrespective of their physical or mental status.

Further, a White Paper does not have the force of law since it merely reflects official government policy position. “In order to comply with the state’s constitutional and international obligations, the policy ideals as reflected in White Paper 6 need to be translated into law,” the report states.

“Everybody is entitled to an education, that’s in our Constitution. Nobody has the right to take that away from anybody … education is something that we need to encourage in our society,” says Quinn.

However, by the the government’s own admission, estimates of between 40 000 and 600 000 children with disabilities of schoolgoing age do not go to school at all. The Equal Education Law Centre’s report says: “Children with disabilities of schoolgoing age who remain out of school are being denied their right to basic education. Insufficient data collection has hampered efforts to collect accurate, disaggregated data on out-of-school children. Department of basic education estimates have ranged from 40 000 to 600 000.”

Because Isabella has a less severe degree of autism, Quinn was left with no choice but to find a school that was more accommodating to the child’s needs. As for Cillian, his schooling years at the cerebral palsy school came to an end when he could not continue further as he would not have been able to cope academically with the next stage, his parents were told.

“As a special needs parent, there’s going to be times in your life where you have these realisations: ‘I can’t go any further’, and it hurts … he’s at the school and he’s happy and that’s been taken away. I’ve got no problem with the school, it is what it is, this is our next journey,” says a clearly emotional Quinn.

The twins, who are now 13 years old, have developmental delays. Cillian has the mental capacity of a two-year-old and Isabella of an 11-year-old.

Quinn says that school is one of the few places the twins get to socialise, as they don’t have playdates or get invited to birthday parties.

The twins have started attending a private school, Edu-Play, that specialises in special needs children. Both have adjusted to their new learning environment.

But the school’s existence is threatened by community members who do not want it to expand due to the possibility of traffic congestion, noise and security issues.

In some ways, Isabella and Cillian are the lucky ones. “The tragic lack of political will to realise the vision of an inclusive education system in South Africa has resulted in two decades of learners being denied their right to quality, inclusive education,” says the Equal Education Law Centre in its conclusion of its report. “South African education laws and policies must be mindful of and responsive to the ever-changing societal and education needs of its citizens. We cannot allow another 20 years to go by with outdated policies that are not meeting our international human rights obligations or the needs of our children.”

“What you put in is what you are going to get out, and it’s a long road,” says Quinn, who strongly believes in early intervention: “Lots of early intervention is my saving grace, and we’ve done everything known to man that we could afford.”

“You have a window, when you close the window when they get older, it is closed.”

“I’m not a parent [with the attitude of] I’ve got a special needs child, she could paint stones and thread beads. No, she has to achieve her best potential. What Isabella achieved with what she’s got is phenomenal. We work hard.”

Her children are treated like children, she says, with discipline, structure and a healthy routine.

“If they’re naughty, they get punished. Everything’s square here. Even Cillian, if he sits and shouts to me from the pram he needs to lie in his bed and have some time out and watch the window, and that’s how it is.”

Like all parents, Quinn and her husband had hopes and dreams for their children. 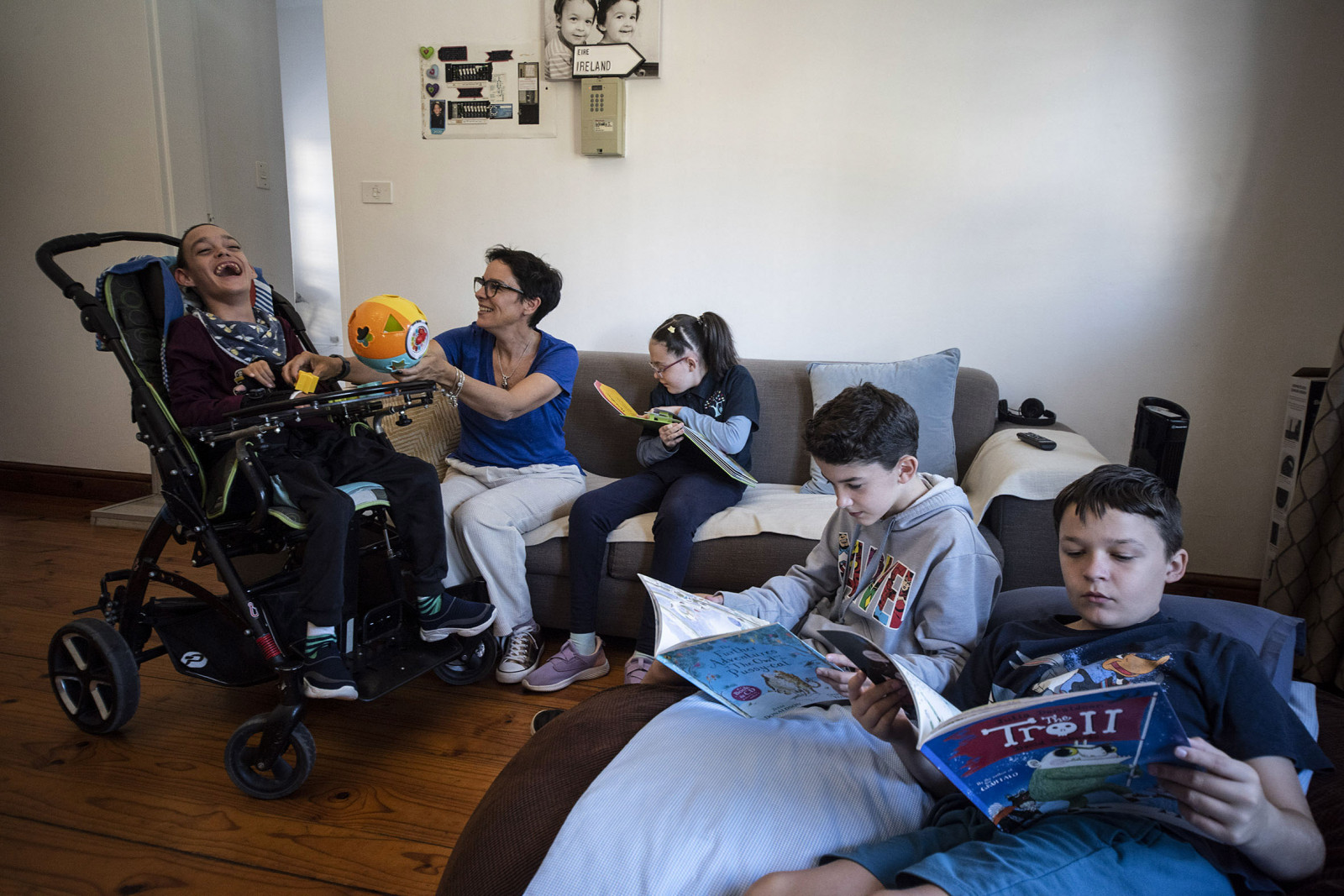