by daniel strauss
in World News
Reading Time: 6 mins read
A A
464
SHARES
1.8k
VIEWS
Share on FacebookShare on Twitter

When
House Minority Leader Kevin McCarthy touched down in Texas on Monday to
lead a flock of Republican lawmakers on a tour of the Southern border, he
wanted to hammer one specific attack line.

“If President Biden wants to lift Title
42, he should come down here,” McCarthy said, according to the Corpus Christi Caller-Times on Monday. McCarthy was referring to the Trump
administration–era policy that restricted border crossings during the coronavirus
pandemic. “Before he makes this decision, he should look … the border agents
in the eye and ask them what’s the best decision to make.”

Later that day, Axios
reported that some of McCarthy’s colleagues are plotting to impeach
Homeland Security Secretary Alejandro Mayorkas in the likely scenario that Republicans
take control of the House of Representatives. The last time a Cabinet secretary
was successfully impeached (technically, he resigned hours before the vote),
Ulysses S. Grant was president.

And on Tuesday, the National
Republican Senatorial Committee sent out its latest attack email, bashing
Senator Catherine Cortez Masto of Nevada for admitting to “flip-flopping her
position on Title 42.” The Republican Senate campaign-arm email said that in
the face of bad poll numbers, Cortez Masto said she actually supported the
Trump-era policy, contra the Biden administration.

“We appreciate Catherine
Cortez Masto being ‘pretty clear’ about her flip flop. Now let us be clear,
too: Masto does not support maintaining Title 42,” the
email read. “In the summer of 2020, she penned a letter to the Trump
Administration urging for an end to what she called the ‘CDC
asylum ban.’ And in August of 2021, Masto voted to end
Title 42 immediately and without a plan. At every turn, Masto
has voted for Joe Biden’s open borders without border security agenda.”

See a
pattern here? Most liberals and Democrats probably think the
midterms will be mostly about inflation, and that may be so, but if you follow
the right-wing media, you’ll hear the word “border” just about as
often.

Republicans
see Title 42, and the border generally, as their preferred attack strategy for
some of the most vulnerable incumbent senators across the country up for
reelection this cycle. They’re trying to use it as a tool either to split red-state
incumbent Democrats from the Biden administration or to bash those candidates and
lawmakers as flip-floppers or tone-deaf Democrats who turn a blind eye to
border security. Democratic candidates in some of the most high-profile races
in the country, meanwhile, have been trying to figure out some sort of middle
ground between abandoning the Biden administration but not fulfilling
Republican caricatures of them on immigration policy.

The
focus on border security and Title 42 isn’t exclusive to a single region. In recent
weeks, Senator Maggie Hassan of New Hampshire has tried to insulate herself
from these kinds of attacks with less than ideal results.

But
the pressure is greatest in the Southwest. In Arizona, Senator Mark Kelly has
joined with his more conservative fellow United States senator from Arizona,
Kyrsten Sinema, in introducing legislation that would delay the Biden
administration from lifting Title 42. That move underscores Kelly’s positioning as a senator
willing sometimes to break with rank and file Democrats and the Biden
administration. Hassan has also signed onto the legislation, which is backed
by five
Republicans.

Other
Democrats running for statewide office, like Democratic gubernatorial candidate
Katie Hobbs in Arizona and Nevada Governor Steve Sisolak, have made similar moves.

But
Kelly is a major target. On Thursday, the National Republican Senatorial Committee launched a new $1 million
advertising campaign linking Kelly to Biden on the policy. The NRSC has
been shooting out a steady stream of similar ads. The committee’s logic is that Kelly
actually supports Biden’s position because he voted against an amendment in
August that directed the Department of Homeland Security to expel immigrants
who came into the U.S. illegally and might have contributed to
Covid-19 spreading in the nation. Kelly’s campaign responded
to CNN that he “has delivered increased border security resources,
introduced bipartisan legislation to address the crisis, and has stood up to
both the Biden administration and his own party to ensure a safe, humane, and
orderly process at the border.”

Recent
polling shows why Republicans are so eager to bash Democrats on Title 42. An
early April Morning Consult poll found 56 percent of registered
voters oppose lifting Title 42. Broken down by party, 78 percent of Republicans
said they strongly opposed lifting it and 42 percent of Democrats agreed. And
more broadly, Gallup Polling found that four in 10 Americans are very
concerned about illegal immigration.

The
Biden administration also felt a setback on Monday when a federal judge vowed
to block the president from lifting the rule on May 23. But Biden
administration officials have shown no interest in dropping their plan. On
Tuesday, the administration released its own outline for what it planned to do after
lifting Title 42—if it can. Senior officials told
reporters that the Biden administration would comply with the court’s ruling.

The
plan, if the Biden administration gets
its way, is for DHS to boost resources (like medical facilities,
transportation, and personnel) to border operations. Over 600 people from other
government agencies would help U.S. Customs and Border Protection. According to
a memo laying out the plan, DHS, alongside the State Department, would work
with other governments to “create a more cohesive and comprehensive approach to
managing migratory flows across the region.”

What
frightens these Democrats seeking reelection is that lifting Title 42 will lead
to a border crisis that Republicans can exploit in November. Texas Attorney
General Ken Paxton said it is the only thing stopping a “devastating flood of illegal
immigration.” Democrats have offered only somewhat more
cautious
criticism.

Hassan
has warned that the Biden administration
“does not appear ready” for the influx of immigrants that would follow lifting
the law. Senator Joe Manchin also said that lifting Title 42 would be a
“frightening” move by the Biden administration. Kelly and Cortez Masto have
offered more measured critiques. Cortez Masto has said, “It’s just wrong to do it without
a detailed plan.” Kelly has warned that he has not seen a satisfying plan to
receive the influx of immigrants who would come as a result of lifting the law.
Kelly has told immigration officials that “they
do not have a plan in place on how to deal with the increased numbers. And it’s
going to be … to be honest, it’s going to be a crisis on top of a crisis.”

Sawyer
Hackett, a veteran Democratic strategist and senior adviser to Julian Castro, said
the remedy for Senate Democrats is not to oppose or try to find a middle
ground. It’s to side with the Biden administration and better educate the
public.

“I
just feel like this is a giant miscalculation from these Senate candidates
because the public obviously doesn’t have the best understanding of what Title
42 is and what it does. If these candidates were making an affirmative case for
what asylum is in this country—that is the system we’ve had in place for
decades where the United States can be a place of refuge for people fleeing
desperate situations, that would be a thing that people support,” Hackett said. “People overwhelmingly support asylum as
a thing, but instead of making that case Democrats are just, once again,
running away from the issue, treating immigration as a third-rail issue.”

We’re
seeing the familiar dynamic of Republicans doing red-hot base-stoking politics
while vulnerable Democrats go looking for the middle. It’s possible that in
these purple states, voters will respond positively to that moderation. It’s
also possible that the states’ base voters will be put off by candidates who seem
too afraid to side with their own president on an issue on which the right is
fearmongering. And border fearmongering doesn’t always work: Donald Trump
couldn’t make that fearsome caravan a decisive issue in 2018. But that was when
the liberal base was fired up, which it sure isn’t now. 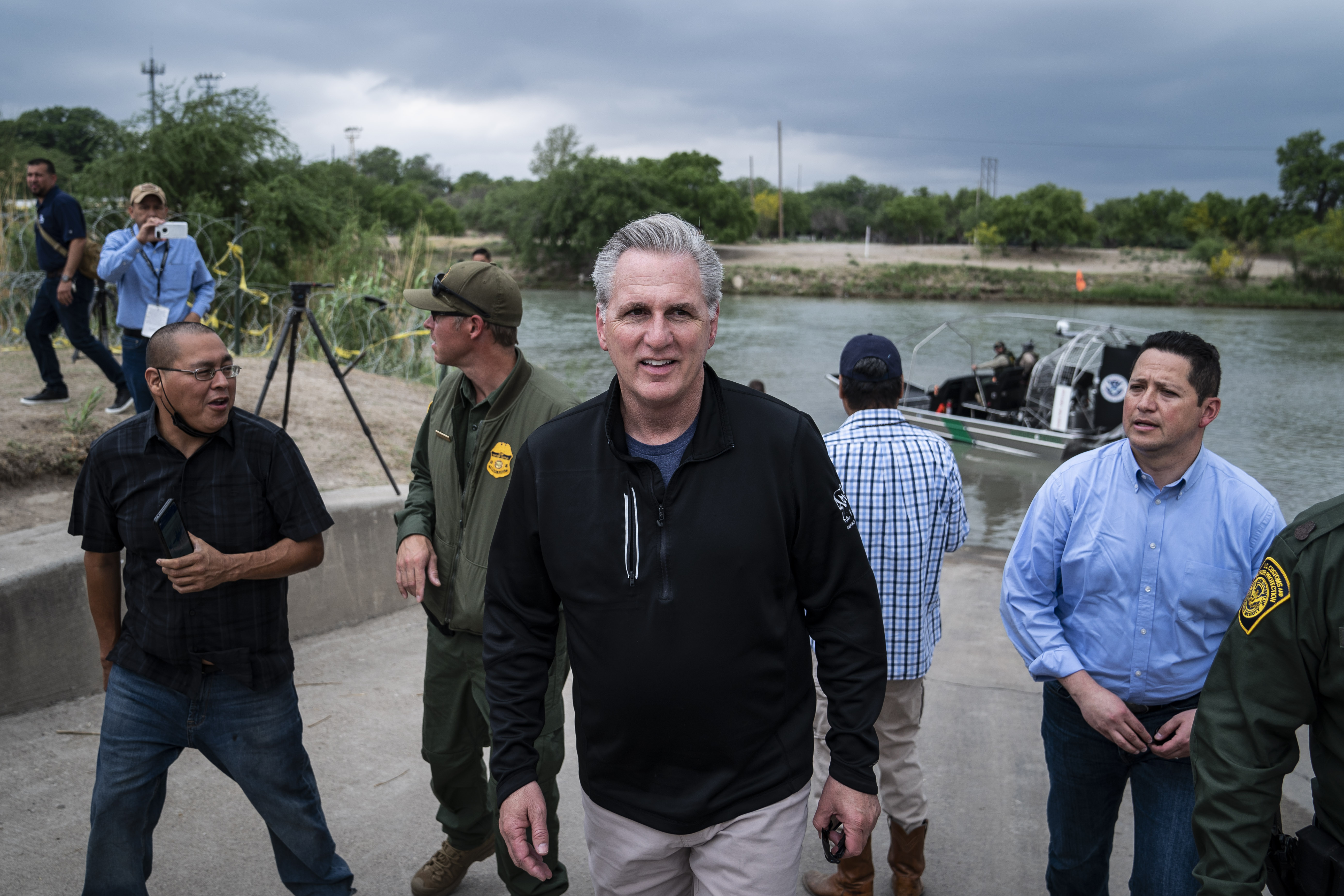 Biden will ask Congress for money to combat global hunger