End All Federal Contracting With Amazon Until It Stops Union-Busting

by john nichols
in World News
Reading Time: 4 mins read
A A
464
SHARES
1.8k
VIEWS
Share on FacebookShare on Twitter

When Joe Biden won the presidency in 2020, he did so as an unabashedly pro-union candidate. He didn’t just mouth labor-friendly talking points—he produced a plan for “strengthening worker organizing, collective bargaining, and unions.” And the plan got down to specifics. For instance, he promised to “ensure federal dollars do not flow to employers who engage in union-busting activities, participate in wage theft, or violate labor law.”

His campaign declared that Biden “will institute a multi-year federal debarment for all employers who illegally oppose unions,” and “ensure federal contracts only go to employers who sign neutrality agreements committing not to run anti-union campaigns. He also will only award contracts to employers who support their workers, including those who pay a $15 per hour minimum wage and family sustaining benefits.”

Workers at Amazon have been organizing the company’s warehouses and seeking to engage in collective bargaining. Since word spread on April 1 that the Amazon Labor Union won a representation vote at the Amazon warehouse on Staten Island in New York City, workers at more than 50 Amazon warehouses have contacted Chris Smalls, Derrick Palmers, and the other ALU organizers. There’s no question that workers want to unionize. Indeed, said Brett Daniels, the director of organizing for ALU’s worker committee, “we have workers all over the country already in communication with us wanting to organize.”

But Amazon, a major federal contractor, is throwing every roadblock it can find in the way of the workers. The immensely profitable corporation, which enjoyed net sales of almost $470 billion in 2021, has opposed legitimate efforts by its employees to secure union representation. Amazon’s rigorously anti-union approach is no secret. It’s been detailed in articles with headlines such as “How Amazon Crushes Unions” (The New York Times) and “How Amazon keeps a close eye on employee activism to head off unions” (CNBC).

So Senator Bernie Sanders says it is time for the president to keep his campaign promise and “sign an executive order to prohibit companies like Amazon that have violated labor laws from receiving federal contracts paid for by the taxpayers of America.” In a letter sent to Biden on Tuesday, Sanders argued that, Amazon “is the poster child as to why this anti-union busting Executive Order is needed now more than ever.”

The letter noted, over the past 18 years, “Amazon has received thousands of federal contracts worth billions of dollars. The Washington Post, also owned by Mr. Bezos, reported that Amazon is in line to receive a cloud contract from the National Security Agency worth up to $10 billion—a contract that it should not receive as long as it continues to violate labor laws. Another Bezos-owned company, Blue Origin, may also receive a contract from NASA worth up to $10 billion to fly a spaceship to the moon after more than 20 current and former employees alleged that this company repeatedly discriminated against workers and did not adhere to safety protocols.”

Sanders, who rallied with Amazon workers on Sunday in New York, did not merely dispatch the letter to the president. He went to the floor of the Senate and delivered a rebuke to efforts by Amazon’s billionaire founder Jeff Bezos and his lieutenants to block union organizing on Staten Island. “Mr. Bezos and Amazon have done everything possible, legal and illegal, to defeat the union,” Sanders said. “In fact, Amazon cannot even come to grips with the reality that the workers in Staten Island won their union election fair and square. In order to stall the process out, their lawyers have appealed that election result to the NLRB. Their strategy is obviously to use their incredible wealth to stall, stall, and stall. In every way possible, they are refusing to negotiate a fair first contract with the Amazon Labor Union.”

The senator explained that the abuses on Staten Island are part of Amazon’s much broader anti-labor agenda.

“Amazon has been engaged in a massive attempt to undermine the union organizing drive—in direct violation of labor laws and regulations,” said Sanders, who then went into specifics:

“Amazon has been penalized more than $75 million for breaking federal discrimination and wage laws and is currently being sued by the NLRB to reinstate a worker who was illegally fired for organizing a union.

“The NLRB has found multiple instances of illegal opposition to unions by Amazon, and there are currently 59 open Unfair Labor Practice cases pending before the NLRB.

“Numerous current and former employees have alleged that Amazon engaged in illegal harassment and discrimination based on race, gender, and sexual orientation.

“Amazon’s inadequate workplace safety policies also pose grave risks to workers. In some cases, their workplace injury rates are more than 2.5 times the industry average. Last December, six Amazon workers died after they were required to continue working during unsafe weather conditions in a warehouse that did not have appropriate safety facilities or policies.”

Sanders told The Nation this week that he intends to keep rallying with Amazon workers as organizing drives and union representation votes spread. To the senator, blocking the online retailer from federal contracting is a matter of basic accountability and respect for the rule of law. “Amazon may be a large and profitable corporation, it may be owned by one of the wealthiest people in America, but it cannot be allowed to continue to violate the law and the rights of its employees. If working people are asked to obey the law, they do it or they are punished by the law,” Sanders told his colleagues this week. “That same principle must be upheld for a large and powerful corporation like Amazon.” 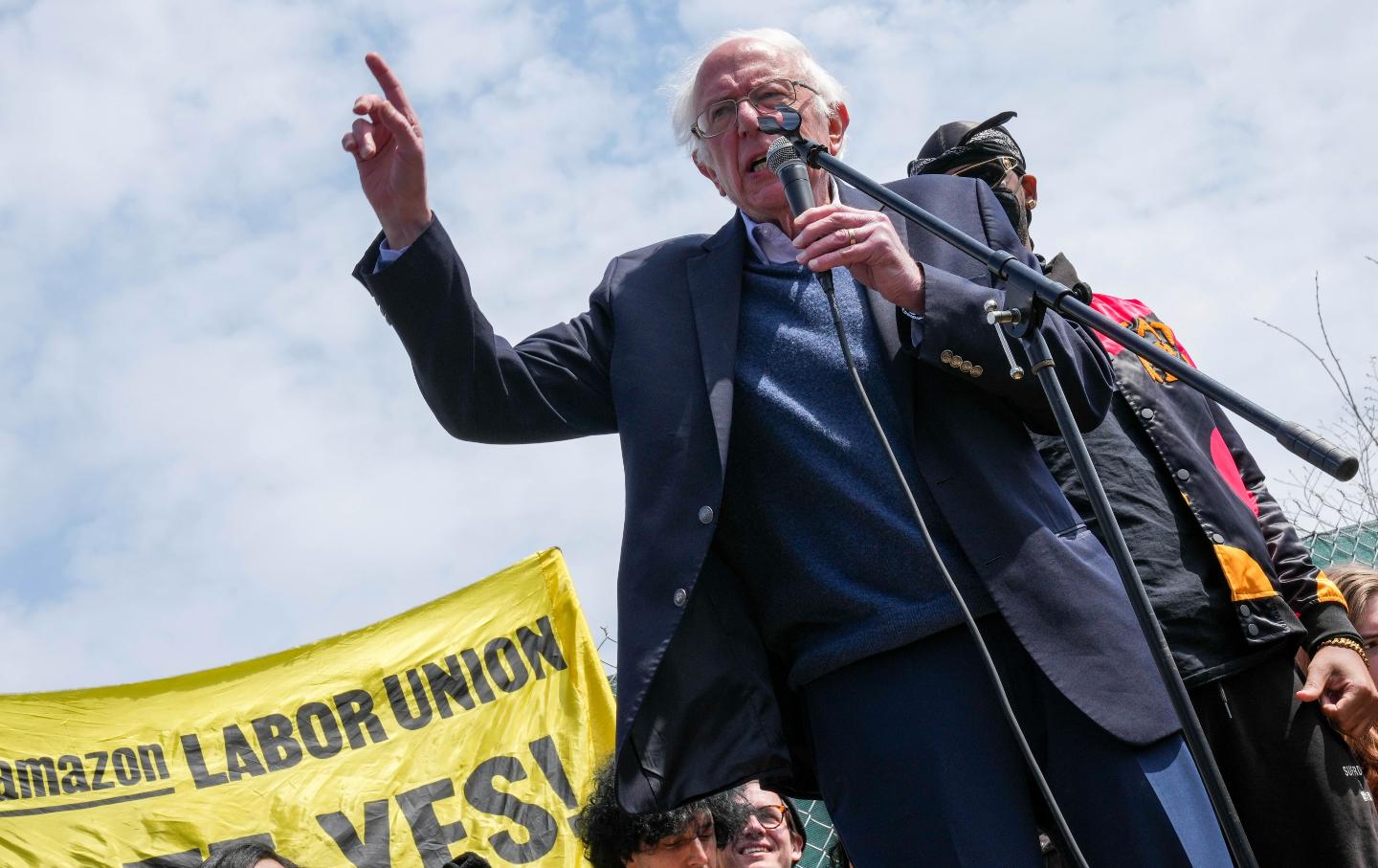 ‘I Don’t Have Any Information’: Fox News Reporter Presses Psaki On Biden’s New Minister Of Truth Being Biased