Ukraine aid, pandemic relief likely to be combined in Senate

by randy culton
in World News
Reading Time: 4 mins read
A A
464
SHARES
1.8k
VIEWS
Share on FacebookShare on Twitter

Senate Democrats said Tuesday they are planning to combine new supplemental appropriations for Ukraine, which President Joe Biden is expected to formally request later this week, with a COVID-19 aid measure that stalled earlier this month in an effort to move both quickly to Biden’s desk.

“We think that will maximize the chances of success of both,” Sen. Tim Kaine, D-Va., said after a Democratic caucus lunch where the combination strategy was discussed.

GOP senators said Tuesday they prefer the COVID-19 and Ukraine aid remain separate but if combined they will still demand an amendment vote codifying the Title 42 directive that has allowed Customs and Border Protection to deny U.S. entry to asylum-seeking migrants on public health grounds.

The Biden administration has said it would lift Title 42 by May 23. But Republicans and a growing number of Democrats have expressed support for allowing Title 42 to remain in place through the duration of the public health emergency.

A federal judge has issued a temporary restraining order to prevent the administration from winding down Title 42 before May 23, but given uncertainty over the next steps in that and other similar litigation, Republicans are demanding legislative action.

[Federal judge signals plans to halt winding down of Title 42]

“We’ll need to have a Title 42 vote at some point here, in all likelihood on the COVID package,” Senate Minority Leader Mitch McConnell told reporters Tuesday.

Democratic divisionsSchumer reiterated his view that Republicans should not “hold up important things like COVID aid” over the Title 42 dispute. But he did not rule out separate legislation if Democrats can resolve intraparty disagreements on Title 42.

“We’re going to be working through this to see if we can come to a position that our caucus can agree on,” Schumer said. “There’s divisions there now.”

Republicans are unlikely to be appeased by a stand-alone vote codifying Title 42 if Democrats try to move something separate from the pandemic aid package. Sen. John Cornyn, R-Texas, said such a bill could be vetoed by Biden, rendering that strategy ineffective.

Sen. James Lankford, R-Okla., said Republicans are unified behind language in his bill that would prevent the administration from ending Title 42 earlier than 60 days after the surgeon general provides written notification to Congress terminating the public health emergency declaration.

Sen. Mark Kelly, D-Ariz., one of the lead Democratic cosponsors of Lankford’s bill, said he wants to see a vote on the measure but doesn’t see why it has to be tied to the pandemic aid bill.

“What I’d rather have is a plan from the administration,” Kelly added, alluding to criticisms from members of both parties that the administration does not have a clear strategy for handling an expected surge of migrants trying to cross the border once Title 42 is lifted.

White House officials have said they have a multipronged plan they’ve begun sharing with Congress and plan to release further details on soon.

Schumer has argued that the Title 42 dispute is unrelated to the pandemic aid. But some Democrats want more information from the administration on the apparent disparity between it requesting more COVID-19 funding to continue fighting the virus while ending Title 42 on the grounds that the pandemic is waning, Kaine said.

That $10 billion came from a bipartisan agreement Schumer negotiated with Sen. Mitt Romney, R-Utah, and other Republicans based on how much offsetting funds they could agree to from repurposing unspent funds from other pandemic aid accounts.

Schumer dodged a question about whether the Ukraine aid would be combined with COVID-19 funding but hinted that the package was evolving.

“We think COVID aid, both international and domestic, is very, very important,” he said.

The original $10 billion pandemic aid package only included funds for domestic needs and left out $5 billion for international aid to provide vaccines and other supplies to vulnerable populations overseas. Schumer had previously suggested combining the international pandemic aid with funding for Ukraine.

It’s likely everything will now be combined into a single package, several Democrats said Tuesday.

Romney said he’s not heard from Schumer since before the recess and there’s been no attempt to negotiate changes to the package or amendments with Republicans.

Schumer underscored the urgency of the international pandemic funding, noting companies that produce therapeutics “are very tempted” to sign contracts with foreign countries because U.S. funding is not available.

“It’s a moving target in both places,” she said. “They both are urgent and have worldwide implications.”

Small-business aidThe path to passing the supplemental will likely require both parties to sit down and negotiate amendments.

If that occurs, Sen. Benjamin L. Cardin, D-Md., said he will try to offer his $48 billion small-business pandemic aid bill as an amendment to the package.

The measure, co-authored by Sen. Roger Wicker, R-Miss., would provide $40 billion for backfilling an empty fund for restaurants, bars and other food and beverage service providers, and $8 billion for other industries that didn’t qualify for previous rounds of aid. Those include gyms, buses and ferries, staging, lighting, sound and other live event service providers and border area businesses.

“I’m looking for the first opportunity,” Cardin said of moving the aid package. “It’s a COVID issue, so I would certainly hope that would be afforded me, but we’ll see how that plays out.”

The House passed a similar small-business aid bill with $42 billion for restaurants and $13 billion for other “hard hit” industries before the two-week April recess.

Cardin and Wicker both said they or their staffs are working to reconcile the House and Senate measures. They acknowledged they don’t yet have enough solid GOP commitments needed to overcome a 60-vote hurdle to pass something, but Wicker said, “We expect we can get them.”

Laura Weiss and Paul M. Krawzak contributed to this report. 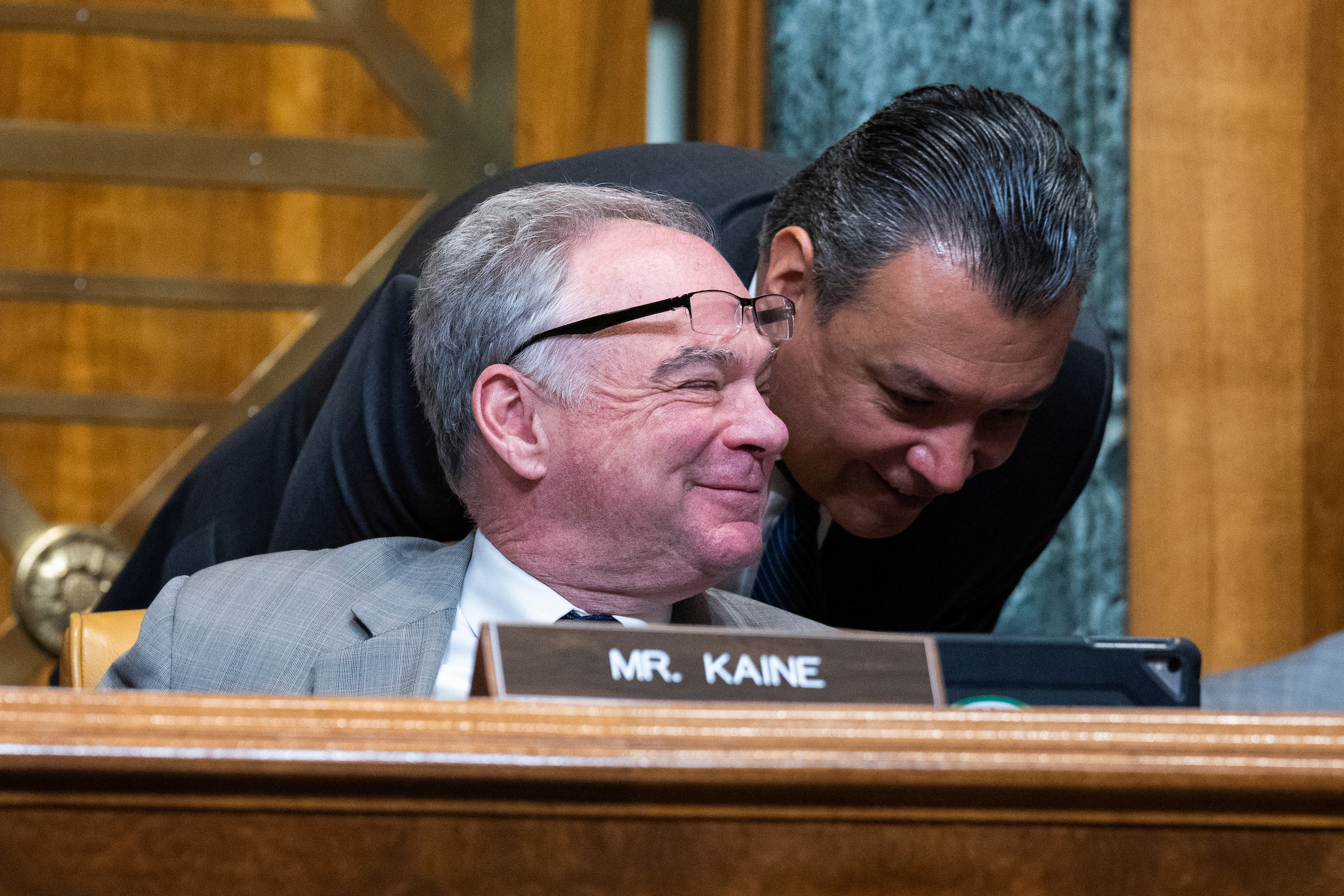 Biden Admin Has Created a Dire Situation at the Border

Biden Admin Has Created a Dire Situation at the Border