by laine motsinger
in World News
Reading Time: 3 mins read
A A
464
SHARES
1.8k
VIEWS
Share on FacebookShare on Twitter

Bob Rae, the Canadian ambassador to the United Nations, denounced as undemocratic the Security Council’s veto power as the General Assembly voted to subject the world’s most powerful body to more public scrutiny.

The General Assembly adopted a consensus motion that would require any of the five permanent veto-wielding members of the council – Russia, the United States, China, France and Britain – to appear before the 193-country assembly to justify its decision.

The move doesn’t get rid of the council’s controversial veto power, but with Russia threatening to continue using it to prevent action against its war on Ukraine, Rae said the historic vote sends a signal that the world will be watching.

“The veto power that is held by the five permanent members of the Security Council is as anachronistic as it is undemocratic,” Rae said in explaining Canada’s support.

In Ottawa, with the Senate poised to pass a tough new law that could lead to the confiscation of billions of dollars of sanctioned and frozen Russian assets, the Ukrainian Embassy urged MPs in the House of Commons to quickly enact the bill.

Sen. Ratna Omidvar’s bill – titled “An Act respecting the repurposing of certain seized, frozen or sequestered assets” – would allow sanctioned and frozen Russian assets to be repurposed to help support the victims of the Russian attacks and would be a legal rarity on the international financial landscape.

“We believe it is absolutely fair that Russian state property or ill-gotten assets of Russian oligarchs must become a part of reparations by the aggressor state to the victim of the aggression,” the embassy statement said.

“By passing the Bill S-217 Canada will demonstrate leadership and could set an example for others to follow and show that the Russian kleptocratic corrupt regime will pay the full cost of its crimes against Ukraine.”

At the UN, Tuesday’s unprecedented motion seeks to hold Russia to account politically if it uses its veto. The new motion requires the General Assembly “to hold a debate on the situation” that gives rise to any council veto within 10 working days and for the country that uses it to be among the first to speak.

Representatives from Russia and Belarus spoke against the motion, but they were countered by the envoys of dozens of countries that sponsored the motion, which was led by tiny Lichtenstein and included Canada.

From the floor of the assembly, Rae delivered a blistering condemnation of a broken UN system that he said was enabling what he called a shameful and illegal act of aggression by Russia against Ukraine.

Rae said the recent deadlock over Ukraine has happened when the world most needs the Security Council.

Rae and the world’s diplomats were speaking as Russian bombs continued pounding the Ukrainian port city of Mariupol, large swaths of which have been reduced to rubble in a war that has killed thousands of Ukrainian civilians and forced millions to flee their homes.

“The use and threat of the veto in situations where atrocity crimes are being perpetrated in Syria and Myanmar, and Mariupol, for example, or in situations where a permanent member of the Security Council has launched a war of aggression against another UN member state, as the Russian Federation is now doing in Ukraine, are not only shameful, they are also contrary to obligations under the UN Charter and to international law.”

This report by The Canadian Press was first published April 26, 2022. 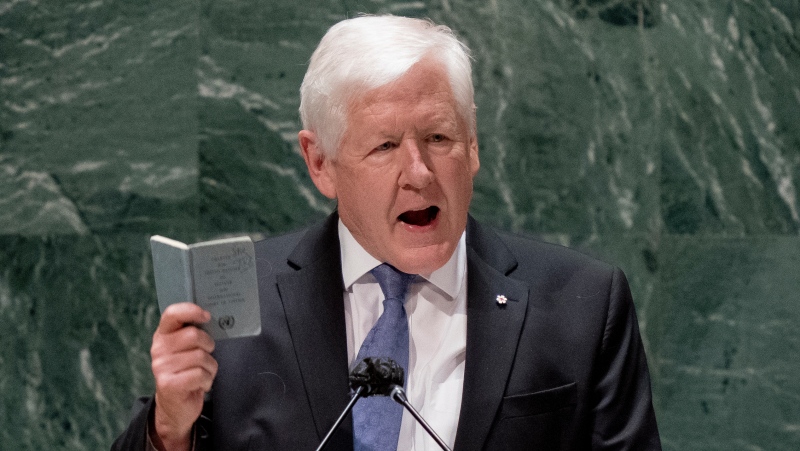