by elroy mote
in World News
Reading Time: 2 mins read
A A
466
SHARES
1.8k
VIEWS
Share on FacebookShare on Twitter

As the Russia-Ukraine war is on the edge of completing two months, Russian forces on Saturday yet again battered the Ukrainian port city of Mariupol, attempting to smash the last resistance from the besieged land. The attack on the Azovstal metallurgical plant, which is sheltering thousands of “remnant” soldiers and civilians, was renewed two days after Russian President Vladimir Putin ordered his generals not to storm in, but instead “block off” the industrial area. “The enemy is trying it completely suppress the resistance of the defenders of Mariupol in the area of Azovstal, said Oleksiy Arestovich, an advisor to Ukrainian President Volodymyr Zelenskyy.

Despite 2,000 strong Ukrainian forces staging fierce defence in the besieged city of Mariupol, Putin last Thursday claimed that Russian troops have successfully “liberated” the city. One of the worst-hit, the southern port city has been turned to rubble after Russia concentrated its offensive to take over the strategic point that leads way to the Black Sea.

Roughly 1,000 civilians alongside Ukrainian troops are sheltering in Azovstal, the last holdout amid arbitrary shelling, Kyiv officials have said. Local authorities have said that at least 1 lakh residents are still scattered in the city with critically depleting supplies of food and water. Meanwhile, during a late-night address, Zelenskyy said Russian troops killed “tens of thousands” of civilians in Mariupol with newly emerged evidence that showed Russia tried to “conceal” the crimes.

During his national address, Zelenskyy accused the Russian troops of launching a blitz in the southern port city of Odesa. The series of attacks on the eve of Orthodox Easter killed five civilians, including a 3-month-old. Eighteen more were severely wounded in the strikes. “The war started when this baby was one month old. Can you imagine what is happening? Zelenskyy said. They are just b*****ds…I don’t have any other words for it, just b*****ds,” Zelenskyy said.

The attacks on Odesa were simply aimed at creating “terror,” said Ukrainian Foreign Minister Dmytro Kuleba. Four Russian missiles hit a military facility and residential building on Saturday in the cultural hub of Ukraine, which is a largely Russian-speaking city. Ukrainian air defence, however, managed to thwart two TU-95 missiles fired from the Caspian sea.

Meanwhile, according to a report by The Associated Press, Russia has claimed control over several villages in the eastern Donbass region after destroying 11 Ukrainian targets overnight. In response, Ukraine, early on Saturday, informed that it had damaged 17 Russian targets, and artillery warehouses in the last 24 hours. The Russians have also continued shelling in residential areas of Kharkiv. 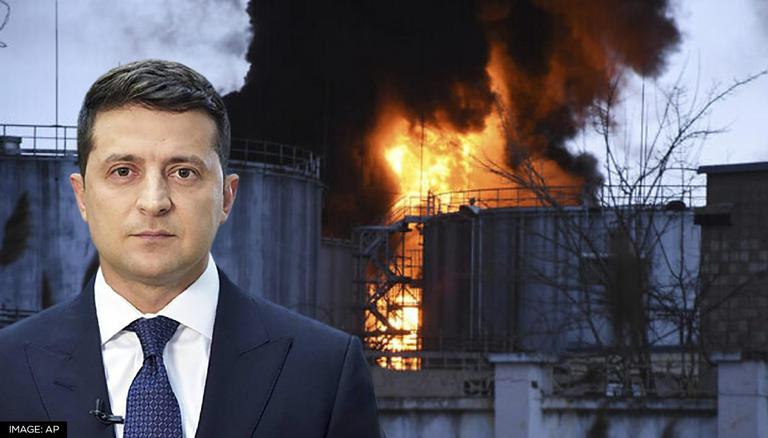