by james wilson
in World News
Reading Time: 3 mins read
A A
464
SHARES
1.8k
VIEWS
Share on FacebookShare on Twitter

France’s future in the European Union hangs in the balance as voters go to the polls on Sunday to choose a new President.

The centrist incumbent Emmanuel Macron is facing a strong challenge from far-right candidate Marine Le Pen whose policies, critics fear, would amount to a de facto ‘Frexit’ from the bloc.

France has long been home to a vibrant tradition of euroscepticism and in 2018 President Macron admitted to the BBC that if the French were given a choice they would “probably” head for the exit door.

Previously Mme Le Pen was open in her belief that France would be better off leaving the EU and dumping the single currency. However, she has since quietly jettisoned those policies and instead focused her campaign on le pouvoir d’achat – the cost of living.

“Polling showed that people were frightened by it [Frexit] and that it hurt her chances of winning,” Lara Marlowe, Paris Correspondent of the Irish Times, told The Anton Savage Show.

“Marine Le Pen is a very flexible [politician]; she sort of congeals to whatever the popular mood is.

“She’s very good at sensing what bothers people, what makes them angry. And then making them feel that she’s one of them, that she supports them and that she agrees with them.”

Listen and subscribe to The Anton Savage Show on Apple Podcasts or Spotify.

Instead, she has replaced it with a radical agenda of reform which has sent the blood pressure of EU officials soaring.

She wants to give French citizens priority in social housing, welfare and jobs – all of which would amount to a violation of EU law.

The Commission has become used to flagrant disregard for their authority from Poland and Hungary; but France has long been one of the nations that has powered the European project.

“It is hard to see how the EU could continue if France – which is the second largest economy, the second most populous country – basically refuses to play ball,” Ms Marlowe continued.

“She says she will not abide by EU law, that French law will have priority over EU law… So the end result would be, as Macron says, a de facto Frexit.”

Marine Le Pen, candidate for “le Rassemblement National” (RN) for the presidential election, here in her office in Paris, France on November 15, 2021.

Front républicain
In 2017 Macron defeated Le Pen by a margin of very nearly two to one as left wing voters rallied to support him in a ‘republican front’ to defeat the far right.

Five years on the French left cordially loathes him, his abrasive mannerisms and his more right-wing economic policies – such as raising the retirement age to 65.

On Sunday many socialists who voted for him in 2017 will stay at home, while others will even vote for Mme Le Pen.

The latest polls suggest Macron has extended his lead over Le Pen and should defeat her by a margin of between 10 and 14%. However, following the victories of Trump in America and Vote Leave in Britain, few would be truly shocked if France awoke on Monday to her very first Madame la Presidente. 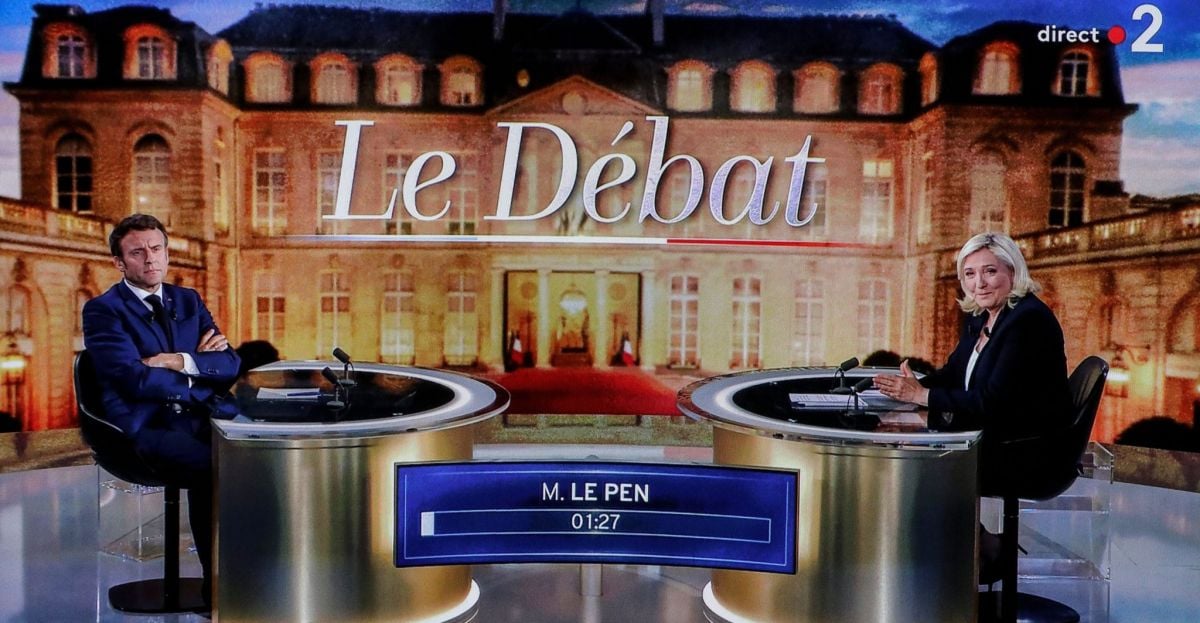