US warns Solomons on Chinese presence

by agence france-presse
in World News
Reading Time: 3 mins read
A A
464
SHARES
1.8k
VIEWS
Share on FacebookShare on Twitter

A photo taken on April 22, 2022 shows China’s ambassador to the Solomon Islands Li Ming (R), and Solomons Prime Pinister Manasseh Sogavare (L) cutting a ribbon during the opening ceremony of a China-funded national stadium complex in Honiara. – The stadium complex, reportedly worth 53 million USD, will host the 2023 Pacific Games for the first time in the island state of 800,000 people. Photo by Mavis PODOKOLO / AFP

HONIARA: United States officials visiting the strategic Solomon Islands on Friday warned of serious repercussions if China were to establish a permanent military presence there after the Pacific nation signed a defense pact with Beijing.

A White House delegation in the capital Honiara delivered the stern warning on the same day that China’s ambassador attended an event with Prime Minister Manasseh Sogavare, signaling the importance of both nations are according to the small island state.

The US and Australia — the Solomons’ traditional allies — are deeply suspicious of the deal, fearing it may give China a military foothold in the South Pacific.

The White House said the officials had told Sogavare that the recently signed pact has “potential regional security implications” for Washington and its allies.

“If steps are taken to establish a de facto permanent military presence, power-projection capabilities or a military installation, the delegation noted that the United States would then have significant concerns and respond accordingly,” the White House said in a statement.

The White House statement also said, “Sogavare reiterated his specific assurances that there would be no military base, no long-term presence and no power projection capability, as he has said publicly.”

Beijing announced this week it had signed the undisclosed security pact with Honiara, which it later confirmed.

A draft of the pact shocked countries in the region when it was leaked last month, particularly measures that would allow Chinese naval deployments to the Solomons, which are located less than 2,000 kilometers (1,200 miles) from Australia.

Sogavare said his government signed the deal with “eyes wide open,” but declined to tell parliament when the signed version would be made public. His public assurances have done little to ease concerns in Washington and Canberra.

Too late to stop the security deal with China, the White House said its diplomatic delegation was visiting Fiji, Papua New Guinea and the Solomon Islands this week to “ensure our partnerships deliver prosperity, security and peace across the Pacific Islands and the Indo-Pacific.”

The US diplomatic team landed in Honiara just three days after the pact was announced.

During a 90-minute meeting with Sogavare and two dozen members of his Cabinet and senior staff, US officials discussed the expedited opening of an American embassy, health care assistance, vaccine deliveries and increased “people-to-people ties,” the White House said.

The delegation also met with opposition leaders and religious leaders.

Kritenbrink tweeted that he and Campbell had honored those lost during the Guadalcanal campaign in World War 2.

Meanwhile, China’s envoy Li Ming attended a ceremony with Sogavare to hand over an elite running track, which is part of a China-funded national stadium complex reportedly worth $53 million.

The facility will host the 2023 Pacific Games — the first time the event has been staged in the history of the Solomons, where many of its 800,000 citizens live in poverty.

“On behalf of the Chinese government and people of China, we congratulate the government of the Solomon Islands,” Li said as he delivered the latest investment lavished by Beijing on a Pacific nation. 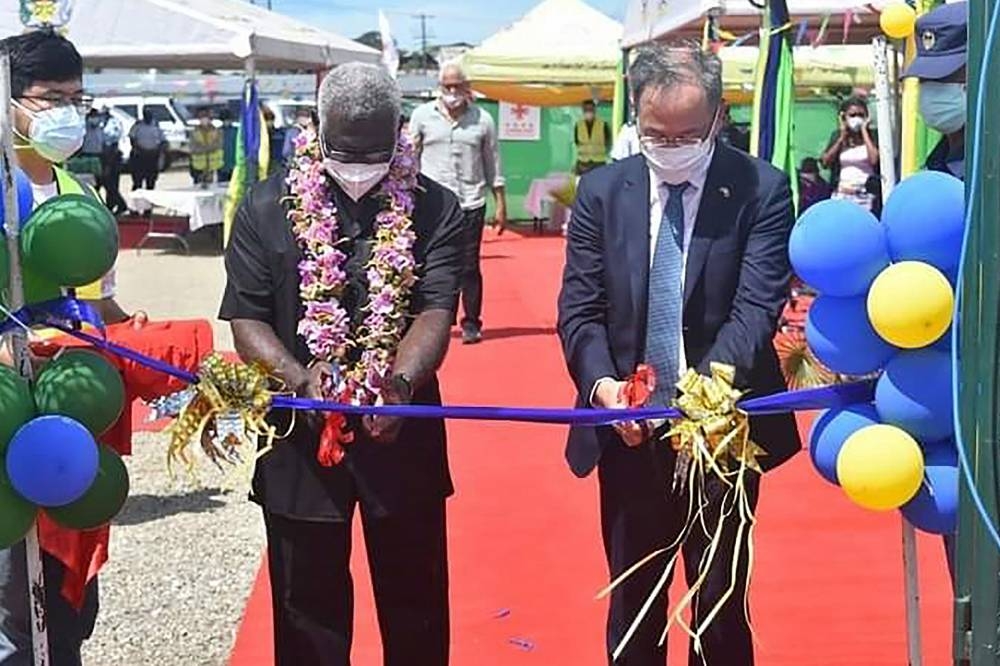