How Biden Can Help the Climate on Earth Day—Without Congress

by kate aronoff
in World News
Reading Time: 5 mins read
A A
464
SHARES
1.8k
VIEWS
Share on FacebookShare on Twitter

“This is the decade we must make decisions that will avoid the worst consequences of a climate crisis,” President Biden told the world leaders he convened virtually at the White House’s Earth Day climate summit one year ago today. “We must try to keep the Earth’s temperature to 1.5 degrees Celsius,” he said. The consequences of not doing so were clear: “more frequent and intense fires, floods, droughts, heat waves, and hurricanes tearing through communities, ripping away lives and livelihoods—increasingly dire impacts to our public health.” It was imperative, Biden added, not to “resign ourselves to that future.”

It has been a very long year since then. Months later the U.S. showed up swaggering but empty-handed to the U.N. climate talks in Glasgow. The Build Back Better Act died and the future of its clean energy provisions remains uncertain. As a result of Putin’s brutal war in Ukraine and rising gas prices at home, Democrats in the lead up to this Earth Day have borrowed one of the GOP’s favorite mantras: Drill, baby, drill.

The White House insists it has not given up on climate change—that it can “walk and chew gum at the same time” (per EPA administrator Michael Regan), ramping up fossil fuel production and climate action simultaneously. But the latest report from the Intergovernmental Panel on Climate Change suggests otherwise. For a better than 50 percent shot at keeping warming to 1.5 degrees Celsius (2.7 degrees Fahrenheit), the report concluded, global coal, oil, and gas usage will need to decline by 95, 60, and 45 percent respectively compared to 2019 levels.

That’s not the path the Biden administration is currently on. But if it wanted to change course, there’s plenty it could still do.

Before Biden took office, climate advocates—cognizant of the razor thin majority Democrats would have in Congress—urged the administration to use the full scope of its powers to start reducing emissions from day one. Yet, reticent to waste any goodwill with Republicans and centrist Democrats like Joe Manchin and Kyrsten Sinema, the White House mostly held off. They were hoping for legislation, which might prove more durable than rules and Executive Orders and wouldn’t be nearly as subject to a right-wing Supreme Court and change in administrations.

But after over a year of trying to please Manchin—as the West Virginia senator hems and haws over what sort of bill he might or might not support—it’s pretty clear that strategy has failed. Emboldened by rising gas prices and the war in Europe, Manchin is now demanding a series of extraordinarily generous giveaways to the fossil fuel industry in exchange for his vote on a temporary expansion of clean energy tax credits.

As Democrats face the possible loss of the House in November, these next few months could be the last window for a decade or more to do anything about climate on a national scale. If Biden wants to live up to his words from a year ago, he should be pulling out all the stops to bring down emissions as quickly as possible.

Build renewables and limit fossil fuel development. In February, the Center for Biological Diversity released a legal brief outlining several steps the Biden administration could take on climate, all without Congressional approval. Under the Stafford Act, for instance, the White House could direct the Federal Emergency Management Association to build distributed renewable energy—power that can operate independently of the grid, and operate even when centralized fossil fuel lines go offline in bad weather—as well as limit fossil fuel development in areas that are vulnerable to climate change.

Reinstate the crude oil export ban. By declaring a national emergency, Biden could reinstate the crude oil export ban. Republicans would scream about this leaving our European allies at Russia’s mercy, of course. In reality this would allow Biden to continue the pre-2015 protocol of planning for where U.S. exports are actually needed based on national priorities instead of giving companies carte blanche to flood the world with gas as prices climb at home.

Restrict new development in the Permian Basin and cancel pipelines. An emergency declaration would also allow the administration to restrict production and new investment in highly polluting fields like the Permian Basin, and limit U.S. investment in high-emitting fossil fuel projects abroad. The White House could also, of course, stop the Dakota Access and Mountain Valley Pipelines as well as Line 3, none of which can credibly claim to meet national security needs.

Use the Defense Production Act for energy efficiency. Though Biden has deployed the Defense Production Act to boost U.S. competitiveness in battery technology, he hasn’t done the same to scale back domestic fuel consumption. Besides being a win for the climate, doing so is also one of the quickest ways the U.S. can free up energy supplies to head to Europe in the short term. As Representatives Cori Bush, Jason Crow, and Senator Bernie Sanders have pointed out in a recent proposal—the Energy Security and Independence Act—DPA powers can be used to ramp up the production and deployment of heat pumps, solar panels, wind turbines and other clean energy technologies. In part, that could flow through the same mechanisms Biden has pledged to boost the domestic production of critical minerals: using funds already allocated to the Department of Defense under Title III of the Defense Production Act to extend “loans, loan guarantees, direct purchases and purchase commitments, and the authority to procure and install equipment in private industrial facilities.”

Jumpstart a global transition. There’s plenty to be done internationally, too. As Olúfẹ́mi Táíwò and Patrick Bigger point out, the U.S. could easily write off the bilateral debt of countries around the world to which it serves as a creditor. It’s the least the administration could do to open up fiscal space for countries to respond, adapt to, and mitigate the climate crisis as promised Fed interest rate hikes threaten to throw much of the Global South into a catastrophic debt crisis. The U.S. could use its outsized power in the Bretton Woods Institutions to push the International Monetary Fund to issue $650 million Special Drawing Rights, a currency governed by the Fund. It could push hard at the World Trade Organization to tear up archaic intellectual property protections that could allow companies to charge extortionary rents to countries that attempt to deploy lifesaving clean energy technologies.

The White House isn’t without its achievements. The “Green Steel Deal” recently negotiated between the U.S. and EU is a promising framework for putting climate at the center of bilateral trade agreements. Newly announced rules on corporate emissions disclosures from the Securities and Exchange Commission could be among the strongest such requirements on the planet. New fuel efficiency and methane regulations from the EPA are a step in the right direction, as is the U.S. Council on Environmental Quality’s recent revisions to the National Environmental Policy Act.

But small steps forward on climate protections have tended to be followed by even bigger steps back: opening up more public lands for oil and gas drilling, issuing open-ended permits for gas exporters, opening the door for the U.S. Export-Import Bank to back oil and gas development, and even calling on Congress to fine oil and gas producers for not drilling more. Biden will be celebrating Earth Day in a very different political climate than he did last year. If he wants to, by next year he could use the enormous power at his disposal to make the physical climate a bit more sustainable. 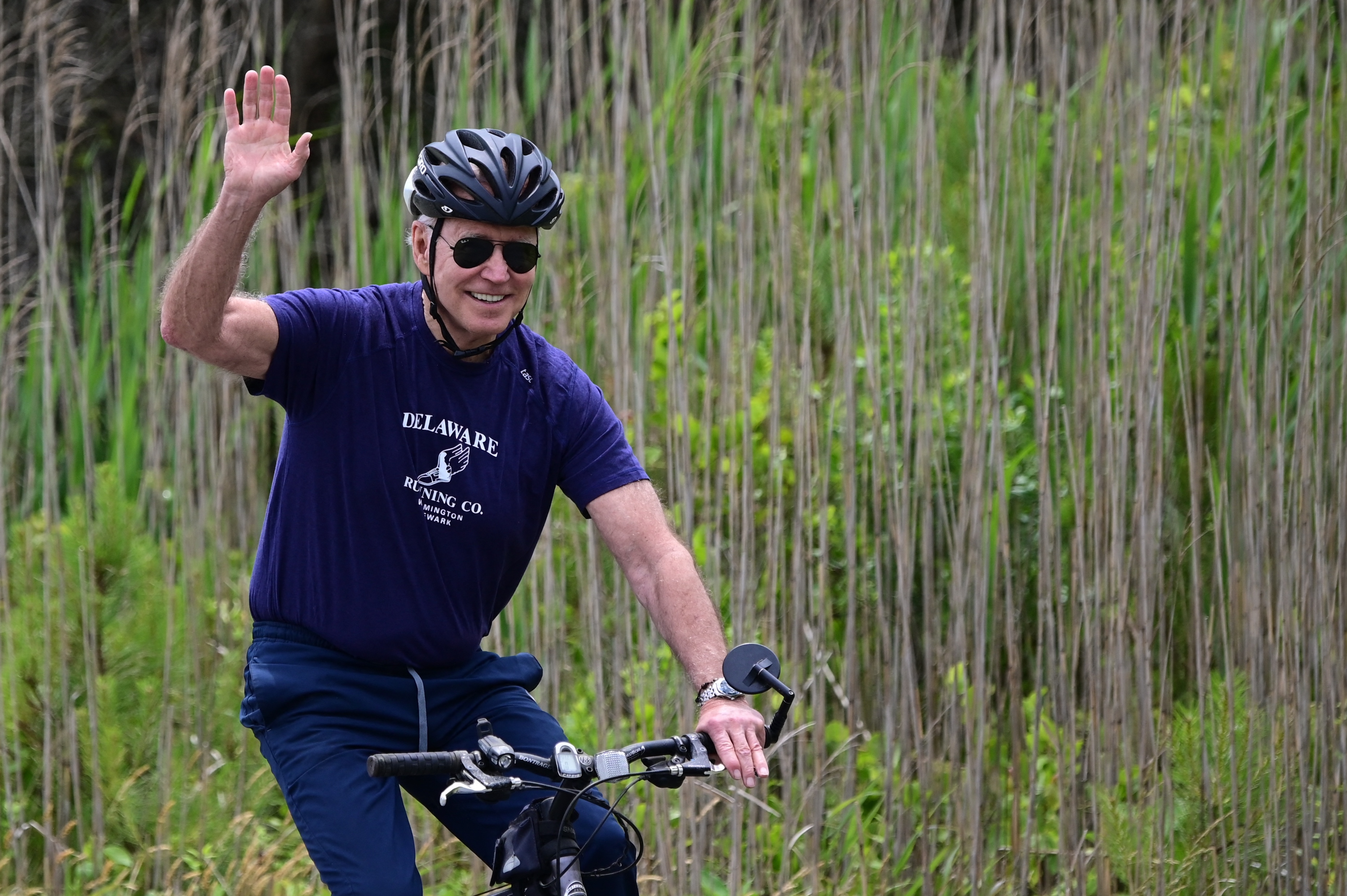