by france 24
in World News
Reading Time: 3 mins read
A A
465
SHARES
1.8k
VIEWS
Share on FacebookShare on Twitter

The French military has said it has videos of Russian mercenaries burying bodies near an army base in northern Mali, which it says is part of a smear campaign against the French, who handed the Gossi base over to Malian forces earlier this week.

Satellite images taken by the French military Thursday morning show what appear to be 10 Caucasian soldiers covering approximately a dozen Malian bodies with sand 4 kilometers (2.5 miles) east of the Gossi military base in the country’s north, according to a French military officer.

In the video one of the soldiers appears to be filming the scene. The Caucasian soldiers in the video are believed to be members of the Wagner Group, a Russian mercenary force, the officer said.

Several tweets with pictures of the bodies have been posted on accounts that support Russia or fake accounts created by Wagner, the officer said. The tweets blame the French for the killings and the burials, according to the French officer.

One tweet from an account called Dia Diarra, allegedly created by Wagner, said: “This is what the French left behind when they left base at #Gossi. These are excerpts from a video that was taken after they left! We cannot keep silent about this!”

The French army transferred control of the Gossi base to Malian soldiers on Tuesday, in what the French said was a safe, orderly and transparent manner. Later that day a “French sensor observed a dozen Caucasian individuals, most likely belonging to the Wagner group,” and a detachment from the Malian army arrive at the Gossi site and unload equipment, said the French military in a confidential report that was seen by AP.

Malian troops with what appear to be Caucasian soldiers in the Gossi base, on April 20, 2022. © French army

“This is the first time that the French military is making public such drone or surveillance maybe done by a plane,” said FRANCE 24 terrorism expert Wassim Nasr. “We know that on the 20th [of March], Wednesday afternoon, the French military saw those vehicles, those Chinese-made vehicles that are used by the Malian army, going into and outside of the base of Gossi that the French left on the 19th – and on the same night they got footage that shows us […] that they slept at the base.”

“We see the Malian soldiers sleeping outside and downstairs we see Russian – French military say Wagner – operatives sleeping in tents,” Nasr continued. “And the same night at 10pm we have the first tweet from a fake Twitter account […] that says ‘look at what we will show you; we will show you the massacre left by French soldiers. […] Then yesterday, so Thursday, at 9:50pm, French surveillance means saw […] as they say, Wagner military throwing sand on corpses next to the military facility.”

Caucasian men filming bodies freshly buried, 3,5 km away from the Gossi base, on April 21, 2022. © French army

The French military said the move to discredit the French forces operating in northern Mali is part of a coordinated campaign of multiple information attacks on them that has been going on for months.

In February, France announced it would withdraw its troops from Mali amid tensions with the country’s ruling military junta and the West African country’s decision to employ Russian mercenaries from the Wagner Group. Some one thousand Russian mercenaries are believed to be operating in Mali, according to military experts. 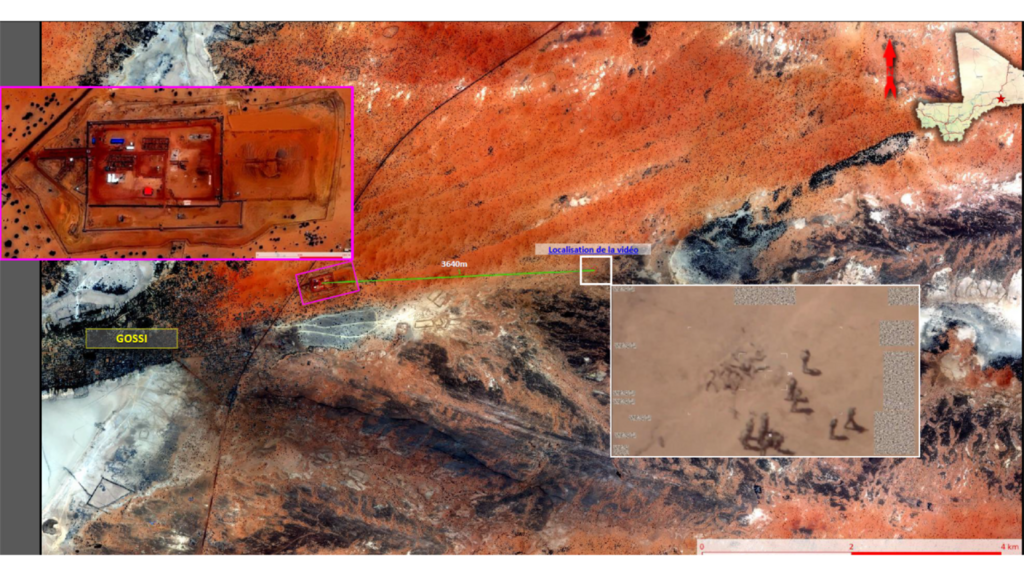