by benzinga
in World News
Reading Time: 2 mins read
A A
464
SHARES
1.8k
VIEWS
Share on FacebookShare on Twitter

The First Bank of the United States, which was Alexander Hamilton’s brainchild and forerunner of our current Federal Reserve Bank System, is seen in a file photo on Walnut Street, Philadelphia on 1831. (Kean Collection/Getty Images)

Each day, Benzinga takes a look back at a notable market-related moment that occurred on this date.

What Happened
On Jan. 7, 1782, the Bank of North America opened as the United States’ first commercial bank.

What Else Was Going On in the World?
Over the next few months, Congress established the U.S. Mint, and the first presidential election occurred exactly seven years later.

First Central Bank Forms
The Bank of North America was first chartered on Dec. 31 and began operation in Philadelphia a week later. It served as the nation’s de facto central bank until 1791, when the First Bank of the United States seized the role.

The brainchild of Alexander Hamilton got its start under Superintendent of Finance Richard Morris, who also proposed the establishment of the national mint. Morris deposited gold, silver, and bills borrowed from France and the Netherlands into the bank and used the supply to back new paper currency.

With its eventual sale of shares, the private institution notched two other American milestones—as one of the first stocks traded on the New York Stock Exchange and as the country’s first initial public offering. Early stockholders include Benjamin Franklin, who owned one of 1,000 shares priced at $400, and the national government, which purchased 63.3 percent of shares using French financing.

The bank existed under various names and as the branch of various parent institutions, including Wells Fargo & Co., through the 20th century and remains the longest continuously functioning branch in the nation. 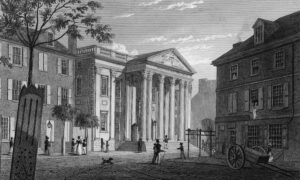