Morocco’s forward Sofiane Boufal (L) celebrates after scoring a goal during the Africa Cup of Nations (CAN) 2021 football match between Morrocco and Ghana at Ahmadou-Ahidjoe stadium in Yaounde, on January 10, 2022. Kenzo Tribouillard / AFPMorocco began their quest at the 2021 Africa Cup of Nations (AFCON) with a 1-0 win over Ghana at the Ahmadou-Ahidjoe Stadium in Yaounde on Monday.

Forward Sofiane Boufal scored in the 83rd minute to hand the Atlas Lions their first win at the biennial football tournament in Cameroon.

The Moroccans dominated much of the Group C encounter but could not find a way through. But Boufal, the Angers man, pounced onto a loose ball and fired his nation into the lead. The North Africans were able to hold on for the rest of the game.

With the win, Morocco now sit top of the group pending the outcome of the game between Gabon and Comoros.

Read Also: [PHOTOS] One Year After Postponement, AFCON 2021 Kicks Off

Morocco are ranked second and Ghana eighth in Africa and both former champions are considered potential winners of the 24-team tournament.

It is 46 years since Morocco won the Cup of Nations for the only time and the latest campaign began without their best-known player, Chelsea midfielder Hakim Ziyech.

He was dumped from the national squad last year after coach Vahid Halilhodzic labelled the Netherlands-born star a “disruptive influence”.

Ghana have won the symbol of African national team supremacy four times, but the last success came 40 years ago in Libya, where teenager Abedi ‘Pele’ Ayew sprang to international prominence.

This was the fourth clash between the Atlas Lions and the Black Stars in the Cup of Nations with each country winning one and the other drawn.

Foul-riddled After a cagey, foul-riddled start at a 42,500-seat stadium named after former Cameroon president Ahmadou Ahidjo, Partey came close on 32 minutes with his angled free-kick going just over the crossbar.

This close shave was a signal for both teams to show more urgency in front of a small crowd and Saiss got his head to a free-kick in a crowded goalmouth only to see it fly over the target.

Ghanaian hearts pumped faster just before half-time when a solo run by Joseph Paintsil offered hope of an opening goal, but his finish was embarrassing, sending his shot well wide.

Paintsil threatened again early in the second half with a lengthy dribble only to pass poorly on the edge of the box and Morocco breathed a sigh of relief.

Andre Ayew, elder brother of Jordan and son of Abedi, attempted a volley off a free-kick but instead of a spectacular goal, the ball flew wide.

Having let the Black Stars down twice, Paintsil thought he had made amends by firing goalwards with 18 minutes remaining only to be denied by a brilliant one-hand save from Yassine Bounou.

In Group B, Guinea edged Malawi 1-0 through a 35th-minute goal from Issiaga Sylla in the western city of Bafoussam and share first place with Senegal.

Left-back Sylla scored from close range after a long cross-field pass found Jose Kante, who pushed the ball into the six-yard box.

Senegal, one of the title favourites, snatched a last-gasp 1-0 victory over Zimbabwe in the first match of a double-header when Liverpool star Sadio Mane converted a 97th-minute penalty.

‘Difficult …Conditions’Senegal’s forward Sadio Mane (L) shoots and fails to score as Zimbabwe’s goalkeeper Petros Mhari (R) prepares to make a save during the Group B Africa Cup of Nations (CAN) 2021 football match between Senegal and Zimbabwe at Stade de Kouekong in Bafoussam on January 10, 2022.
Pius Utomi EKPEI / AFPEarlier in the day, Sadio Mane gave Senegal a late win over Zimbabwe in a Group B clash.

Disaster struck the gallant underdogs when a shot hit the right arm of Kelvin Madzongwe and Mane sent goalkeeper Petros Mhari the wrong way with the resulting penalty on 97 minutes to settle a lacklustre affair.

While Senegal, one of the favourites to win a competition delayed by Covid-19, dominated possession, they rarely threatened to break down a well-organised Zimbabwe defence.

“It was difficult playing in such hot conditions and not having an opportunity to play any warm-up matches affected us,” said Mane.

“We left it very late to score, but the most important issue was to secure maximum points and we achieved that. Now we must try to perform better against Guinea.” 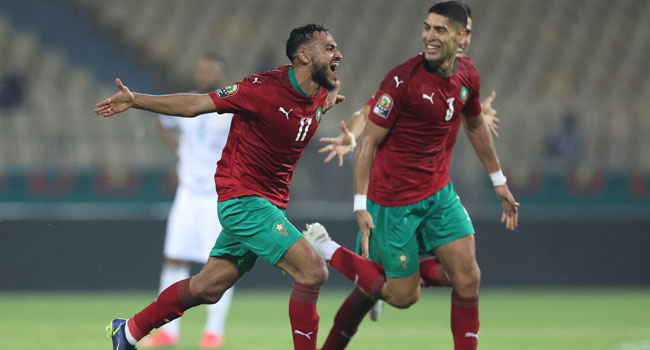 The Next Wave: Africa’s single currency may be digital