U.S. Deputy Secretary of State Wendy Sherman, left, and Russian deputy Foreign Minister Sergei Ryabkov at security talks on soaring tensions over Ukraine, at the U.S. permanent mission in Geneva on Jan. 10.DENIS BALIBOUSE/AFP/Getty ImagesHigh-stakes talks between the United States and Russia ended Monday without any evident progress on the key issues of Ukraine and NATO, as Russia warned again of a potential military response if its security demands were not met.Russian deputy foreign minister Sergei Ryabkov said there had been no movement on what he called his country’s top priority: securing a legally binding guarantee that the North Atlantic Treaty Organization would stop expanding east into the former Soviet bloc. As a result, he said, Russian military “exercises” along his country’s borders with Ukraine would continue.That, he warned, meant tensions could continue to escalate. “The situation now is so dangerous, and so – I would say – precarious that we cannot afford any further delays in resolution of this very fundamental question,” Mr. Ryabkov told a press conference in Geneva at the conclusion of day-long talks with American officials in the Swiss city. “The U.S. and Russia in some ways have opposite views on what needs to be done.”Deputy U.S. Secretary of State Wendy Sherman, who led the U.S. delegation, said she had reiterated the U.S. position that no country outside NATO could be allowed to determine who did and didn’t join the alliance. Ms. Sherman said substantive negotiations on other issues were impossible at a time when Russia had an invasion-sized force assembled near its borders with Ukraine.Ms. Sherman repeated President Joe Biden’s warning that the U.S. would respond to any Russian military action with tough economic sanctions targeting Russia, as well as increased military support to Ukraine. Canada has signalled it will join any new sanctions levelled against Moscow, and Ottawa is also considering a Ukrainian request for additional military assistance beyond the 200 Canadian military trainers who have been stationed in Ukraine since 2014.The Geneva talks were prompted by Russia’s massive military build-up, which began late last year. Ukrainian and American officials say the Russian force includes more than 100,000 troops within a short drive of the borders, supported by tanks, artillery and other equipment. The crisis will also be the focus of a special meeting of the NATO-Russia Council – a co-ordination body established in 2002, which hasn’t met in more than two years – on Wednesday in Brussels. Both Mr. Ryabkov and Ms. Sherman are due to take part.While Mr. Ryabkov said Russia had no intention of attacking Ukraine, he claimed that he was worried about “possible provocations” that might be carried out in the border areas by Ukraine, the United States or Britain. “That may create a situation where the possibility for some clashes will grow.”Russia protested each time as NATO expanded five times following the end of the Cold War, from a 16-country alliance in 1990 to its current size of 30. President Vladimir Putin has called NATO’s presence in Ukraine, which shares a 2,000-kilometre-long border with Russia, a “red line.” Kremlin-controlled media regularly compare the presence of NATO troops in the country to the 1962 Cuban Missile Crisis, which saw the world come to the brink of nuclear war over the Soviet Union’s deployment of ballistic missiles into the Caribbean country.Ms. Sherman said Mr. Ryabkov had also told her that Russia was not planning to invade Ukraine. But Moscow, she said, needed to back up those words with actions. “Return the troops to barracks or tell us what exercises are ongoing and what their purpose is. One doesn’t normally send 100,000 troops to the border just to exercise,” she said.While Ukraine is not a member of NATO, it has sought membership since a 2014 pro-Western revolution in the country. Russia responded to that upheaval by sending troops to annex the strategic Crimean Peninsula. It has also backed a militia that seized control of the predominantly Russian-speaking Donbas region of Ukraine, sparking an eight-year-old war that has killed more than 13,000 people.Russia views the 2014 revolution in Kyiv – which overthrew the Kremlin-backed government of Viktor Yanukovych – as a Western-sponsored coup d’état, one that brought NATO troops closer to its soil. In addition to demanding a guarantee that Ukraine (as well as Georgia, another former Soviet republic) will never join NATO, Moscow has published a draft document that calls for NATO troops to withdraw from all of Eastern Europe, with Western members of the alliance withdrawing their equipment from countries such as Poland, Romania and the Baltic states, which joined the grouping after 1997.Ms. Sherman said there was room for eventual negotiations about “reciprocal” steps that both Russia and the U.S. could take to ease each other’s security concerns. Such measures could include agreed limits on missile systems, or the size and location of military exercises.But on the key issue of NATO expansion, Ms. Sherman said she had told Mr. Ryabkov outright that it was up to Ukraine to decide what countries it wanted to co-operate with, and what alliances it sought to join.“We will not allow anyone to slam closed NATO’s open-door policy, which has always been central to the NATO alliance,” Ms. Sherman said in a conference call with reporters. “We will not forego bilateral co-operation with sovereign states that wish to work with the United States, and we will not make decisions about Ukraine without Ukraine, about Europe without Europe, or about NATO without NATO.”The Geneva talks took place just days after Russia and its allies in the six-nation Collective Security Treaty Organization sent thousands of troops into Kazakhstan, another former Soviet republic, to help that country’s authoritarian regime put down an uprising that turned violent. On Monday, Mr. Putin said the CSTO had shown that it would not allow any more revolutions in the region like the one that happened in Ukraine.Ms. Sherman said Kazakhstan was not discussed in Monday’s talks.Our Morning Update and Evening Update newsletters are written by Globe editors, giving you a concise summary of the day’s most important headlines. Sign up today. 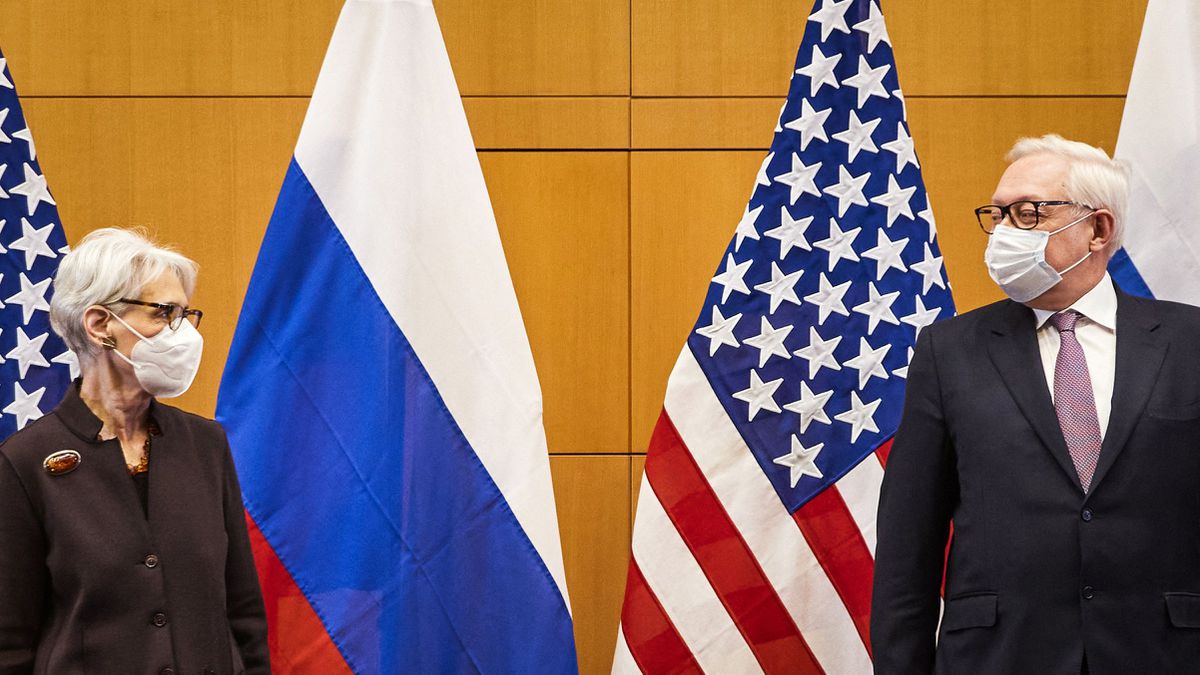