‘Say no to Putin’: Ukrainians support protests in Kazakhstan

by alejandro kucera
in World News
Reading Time: 3 mins read
A A
464
SHARES
1.8k
VIEWS
Share on FacebookShare on Twitter

Kyiv, Ukraine – With their country’s fate being discussed at this week’s US-Russia talks, Ukrainians took to the streets over the weekend to defend their independence and champion an additional cause – that of Kazakhstan’s protests.

On Sunday, demonstrators in Kyiv and Kharkov, Ukraine’s second largest city, held signs that read “Say no to Putin” and flew Kazakhstan flags alongside Ukrainian ones.

Kazakhstan’s blue and gold flag also appeared in the winter skies over Kyiv on Saturday, flown from a drone in an act of protest organised by Dronarium, an unmanned aerial vehicle enthusiast community known for political statements.

“Every nation has the right to protect their socioeconomic and political rights through peaceful protest,” said drone operator Vitaly Shevchuk.“We condemn violence in any form, but we also oppose foreign military intervention in Kazakhstan under the guise of a peacekeeping operation, which is more like punitive action and risks becoming an occupation.”

After a week of violent protests that began over a hike in fuel prices and quickly spread across the country – leaving at least 164 dead, 2,000 injured and almost 6,000 arrested – a Russian-led military alliance has now restored control of Kazakhstan to the government.

The Collective Security Treaty Organization (CSTO), an alliance of several former Soviet states, deployed about 2,500 troops to Kazakhstan to help quell the protest, including Russian paratroopers who are guarding “vital facilities and social infrastructure,” a Russian Defence Ministry statement said.

Critics have accused Russia of “occupation” over its involvement, with Kazakh Mukhtar Ablyazov, a former minister turned opposition leader, warning President Vladimir Putin will draw the country into “a structure like the Soviet Union” unless the West intervenes.

Motivated more by their own hopes to defy Putin than in sharing a common cause with the protests, Ukrainians also urged resistance.

“The dictator [Putin] wants to rebuild the USSR by force,” said Olga Angelova, who was among the protesters in Kyiv.

“He must be stopped – we Ukrainians will resist the occupiers. We call on the West not to accept a Putin ultimatum,” she said, referring to this week’s talks over a possible Russian invasion of Ukraine.

Kazakhstan’s blue and gold flag flies in winter skies over Kyiv as protesters show solidarity with those in the Central Asian nation [Courtesy: Dronarium]
Leading the CSTO in Kazakhstan is commander Andrey Serdyukov, prompting further speculation of occupation from Ukrainians – the colonel-general previously led troops in Crimea, which was annexed by Moscow in 2014, and Donbas, which is held by Russia-backed separatists.

As US and Russian diplomats meet this week, with talks in Geneva and Brussels beginning on Monday, the negotiations could become a defining moment in the history of relations between NATO and Russia.

Ukraine, however, will be missing from two of the three negotiating sessions, prompting the refrain “No decisions about Ukraine without Ukraine” to be widely used, including by Dmytro Kuleba, Ukraine’s former foreign minister.

The current threat comes after eight years of low-level conflict that has caused the deaths of more than 13,000 people.

US Secretary of State Antony Blinken last week spoke of “diplomacy and de-escalation”, but on Sunday, Washington played down expectations of a breakthrough at the talks and Russia said it would not make concessions under US pressure.

Experts are divided over how the unrest in Kazakhstan could affect Putin’s position on Ukraine – whether it would avert pressure with his attention now split, or embolden him and make him less willing to compromise.

“Putin is likely to be smarting and looking for a big win on Ukraine as a diversion from his humiliation in Kazakhstan,” said Timothy Ash, senior strategist at BlueBay Asset Management.

“This makes the situation in Ukraine more, not less dangerous.”

The US has for weeks warned that Russia has stationed masses of troops near Ukraine with the possible intent of staging a new invasion.

It is not believed that there has been any significant movement in the last few weeks and a withdrawal of 10,000 soldiers was reported in late December, but the remaining troops are in positions where they could possibly strike parts of the country.

As a result, the US and Ukraine have extended their cooperation on intelligence and security matters.

If Moscow does take military action, Washington officials are preparing unprecedented sanctions and have tried to secure support from European allies in the form of similar measures.

According to The New York Times, the sanctions would likely be directed at “cutting off the largest Russian financial institutions that depend on global financial transfers” in a “high-impact, quick-action response” that was not pursued in 2014.

For the negotiations to be successful, there must be compromise.

Russia has offered an ultimatum in exchange for easing tensions with Ukraine – that Ukraine will never be allowed to join NATO – but this has already been rejected by the US and NATO. 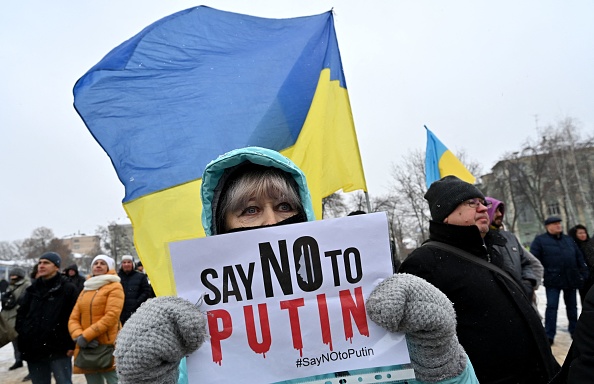