by arden coby
in COVID-19
Reading Time: 2 mins read
A A
464
SHARES
1.8k
VIEWS
Share on FacebookShare on Twitter

Thailand continues the suspension of the Test & Go scheme for travellers, as the country is battling the spike in Covid-19 cases driven by the Omicron variant, a senior Public Health Ministry official said on Tuesday.

Opas Karnkawinpong, director-general of the Department of Disease Control, said the country will not reimpose the quarantine-free programme due to the spread of Omicron.

“Under the current circumstances, there’s no plan to bring back Test & Go,” Dr Opas told a media briefing.

He did not elaborate on how long the scheme will remain suspended.

On Monday, Public Health Minister Anutin Charnvirakul said he would ask the Centre for Covid-19 Situation Administration (CCSA) to keep the programme on hold until the end of this month.

Neither Dr Opas nor Mr Anutin mentioned the CCSA meeting, and it was unclear whether the meeting took place.

Government spokesman Thanakorn Wangboonkongchana said on Tuesday air travellers who had successfully applied for Test & Go can enter the country by next Monday.

Prime Minister Prayut Chan-o-cha was also concerned about the potential spike in Omicron cases, after many people returned from the long holidays, the spokesman added.

Thailand temporarily suspended the scheme from Dec 22 to at least Jan 4, according to an announcement in the Royal Gazette published on Dec 22.

The Phuket Sandbox is the only sandbox scheme in effect. Other similar schemes have been temporarily shelved since Dec 22. Another entry into Thailand is through the quarantine programme.

The highly contagious Omicron variant has spread fast in the country from only 205 accumulated cases reported on Dec 24 to 2,062 as of Monday, according to official data.

The variant fanned from 33 provinces reported on Dec 29 to 54 provinces on Monday, according to the Public Health Ministry.

Supakit Sirilak, director-general of the Department of Medical Sciences, appealed for calm as most patients had fully recovered after a two-week quarantine. The rest still received hospital treatment.

He said the clusters in Ubon Ratchathani, Chon Buri and Khon Kaen could accelerate the spread of Omicron due to the high number of infections detected in some locations in these provinces. 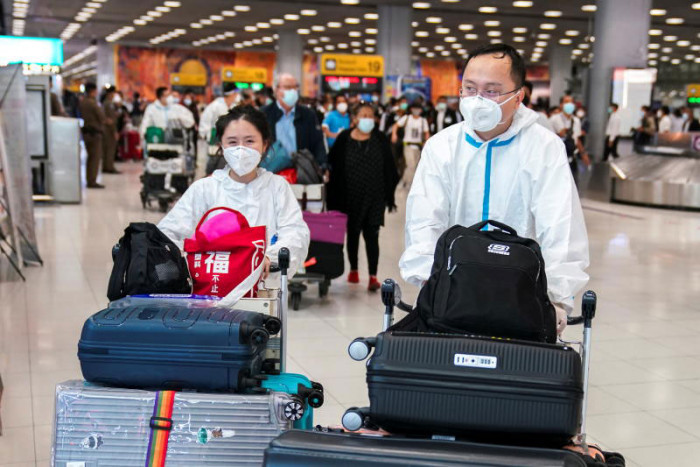