by clarin.com
in Community
Reading Time: 3 mins read
A A
464
SHARES
1.8k
VIEWS
Share on FacebookShare on Twitter

The young Senegalese writer Mohamed Mbougar Sarr, 31, unknown to the general public, won the prestigious French Goncourt literary prize this Wednesday for his novel La plus secrète mémoire des hommes (The most secret memory of men). Mohamed Mbougar Sarr thus becomes the first writer from sub-Saharan Africa to receive this award, the most precious of the French literary awards, lowers the average age of the winners by ten years and puts a small independent publisher in the spotlight. The book was published in August with a prudent circulation of 5,000 copies by the French publisher Philippe Rey and the Senegalese Jimsaan, but about two months after its release it has already sold 30,000 copies and has a long list of requests for translations and even adaptations to the movies. Mohamed Mbougar Sarr is 31 years old and is unknown to the general public. Photo EFE / EPA / IAN LANGSDON The writer was the great favorite and clearly prevailed with six of the ten votes of the jurors, in the first round of voting. “I feel great joy. Simply. Words still fail me,” he said. The youth of the writer contrasts with the serenity with which he has defended his book, the same calm with which he arrived this Wednesday at the Drouot restaurant, where the jury of writers and intellectuals announced the name of the winner for more than a hundred years, except the latter, which was delivered virtually due to the pandemic. The president of the Goncourt Academy, Didier Decoin, praised Mohamed Mbougar Sarr’s novel, calling it a “hymn of literature.” His work was described as “a hymn to literature.” Photo Bertrand GUAY / AFP A symbolic award “With this young author, we return to the fundamental foundations of Goncourt. 31 years, some books before him. Let’s hope that Goncourt does not cut him off the desire to continue,” said Goncourt academy secretary, writer Philippe Claudel. Mbougar Sarr is one of the youngest writers to receive this award, the winners of which have an average age of 41.8 years. In 2016, Leila Slimani was awarded with 35 years and before her, in 2004, Laurent Gaudé was 32 when he won with “Le Soleil des Scorta”. There are few copies of his books in French bookstores. Photo EFE / EPA / IAN LANGSDON Created in 1903, in its first editions the Goncourt used to rule in favor of those under 30 years of age but, in the second half of the 20th century, the youngest writer was Patrick Frainville, in 1976, with 29 years. The Senegalese man recovers in this novel the figure of the Malian writer Yambo Oulologuem, known as the Black Rimbaud, a cursed author on whom he draws a political and love story, committed against colonialism and the great tragedies of the 20th century. The plot takes place between Senegal, France and Argentina, and in fact begins with a passage from The Wild Detectives, by Roberto Bolaño, whom Mbougar Sarr has evoked in several interviews as his teacher. The argument takes place between Senegal, France and Argentina, and actually starts with a passage from “The Wild Detectives.” Photo Bertrand GUAY / AFP) The winner of the Goncourt receives a symbolic check for 10 euros (13 dollars), but the prize guarantees the publication and sale of hundreds of thousands of copies. Last year’s winner, Hervé Le Tellier’s L’Anomalie (The Anomaly), sold over a million copies, something never seen since Marguerite Duras’s L’Amant (The Lover). Without copies of the book After knowing the ruling, the experts warned about the difficulties that a small publisher like Philippe Rey could find to reintroduce a sufficient circulation in the middle of the paper supply crisis and when the printers take even weeks to be able to reprint. In front of the piles of books that large publishers such as Gallimard, Grasset or Flammarion make available to bookstores on the day of the Goncourt delivery, this Tuesday the absence of the novel La plus secrète mémoire des hommes stood out on the shelves of various central points selling. “I feel great joy. Simply. Words still fail me,” he said. Photo Bertrand GUAY / AFP) Among them, the IÇI Library, one of the largest in the central neighborhood of Ópera, which at one in the afternoon only had a copy of the work of the brand new Goncourt, or the Franco-Spanish Cariño Library, in the popular Belleville neighborhood, which has been waiting for a resupply for several days. These problems are temporary for the moment, as the delivery of a Goncourt can change the life of a publishing house and give it a considerable economic and publicity boost. The Renaudot, for Amélie Nothomb Parallel to the Goncourt, the Renaudot Prize was also awarded, which went to the Belgian media writer Amélie Nothomb for Premier sang (First Blood). Amélie Nothomb won the Renaudot Prize. Photo Martin LELIEVRE / AFP Nothomb has been on the Goncourt and Renaudot finalists for several years and managed to win this Wednesday with this book in which he talks about the death of his father in the first days of confinement, in 2020. In just two months it has sold more than 230,000 copies. AFP and EFE PC TOPICS THAT APPEAR IN THIS NOTE 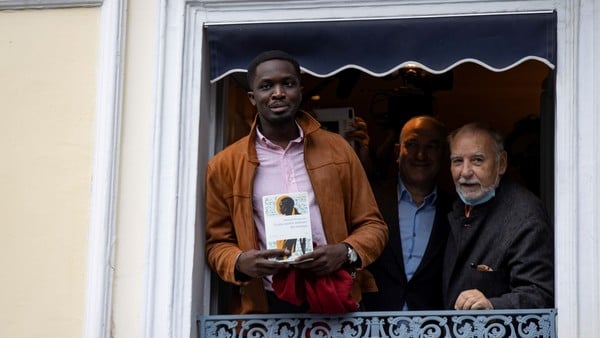 Photos from Senegal: A truck arrives and releases chemicals directly into the sea

Grammy Awards to be postponed again this year due to Omicron?

Grammy Awards to be postponed again this year due to Omicron?