by john liang
in Africa News
Reading Time: 1 min read
A A
464
SHARES
1.8k
VIEWS
Share on FacebookShare on Twitter

South African freediver Amber Fillary has set up a crowdfunding page to pay for her training to break a Guinness World Record for the “longest underwater walk.”

Fillary hopes to surpass just under 90m/295ft, according to an entry in her blog, and the attempt is now set for November 28th, 2021.

She is also hoping to set a new world record for the longest under-ice swim on breath hold. That attempt is set for early next year in Norway, where Fillary will look to break her own world record of 229ft/69.8m with no fins, no weight belt, no wetsuit and under 34cm/13in of ice.

To donate to her campaign, go to makeachamp.com or check out her blog at amberfillary.com or follow her on Instagram.

John Liang is the News Editor at DeeperBlue.com. He first got the diving bug while in High School in Cairo, Egypt, where he earned his PADI Open Water Diver certification in the Red Sea off the Sinai Peninsula. Since then, John has dived in a volcanic lake in Guatemala, among white-tipped sharks off the Pacific Coast of Costa Rica, and other places including a pool in Las Vegas helping to break the world record for the largest underwater press conference. 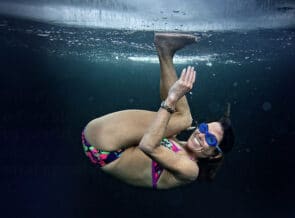