Striving for safer roads in Senegal

by [email protected]
in Africa News
Reading Time: 3 mins read
A A
464
SHARES
1.8k
VIEWS
Share on FacebookShare on Twitter

The 69-year-old father was travelling from Dakar, Senegal’s capital, to neighbouring Mauritania with four of his children for Eid al-Fitr, his eldest son at the wheel.

But about 90 km outside the capital, his son suddenly lost control of the vehicle, crashing into a tree.

“I blacked out,” Dieng recalls, “and woke up in the hospital.”

When he inquired about his four children, he received tragic news: they had all been killed on impact.

Each year, there are around 27 000 road traffic accident victims in Senegal, with 11 000 in Dakar alone. These figures help explain why Africa, with its 272 000 road-related deaths annually, accounts for 20% of all road fatalities worldwide, despite having only 3% of the world’s registered vehicles. The region has the highest road fatality rate, at 26.6 per 100 000 people.

In Senegal, nearly 27,000 people are victims of accidents on public roads each year, 11,000 of which are recorded in Dakar alone.

Every thirds Sunday of November, the United Nations celebrates the World Day of Remembrance for Road Traffic Victims to honour the victims, living and deceased, of road accidents. This year’s theme, “Remember. Support. Act,” calls on the international community to remember road traffic victims, to advocate support for accident survivors, and to act by implementing data-driven solutions to avoid future road-related tragedies.

To support this third objective, the World Health Organization (WHO) is working with Senegal’s Ministry of Health and Ministry of Infrastructure, Road Transport and Development on a project to improve data on traffic fatalities.

For Ousmane Ly, head of road safety at the Road Transport Directorate, the initiative is a potential game-changer for road safety policy.

“There were deficiencies in our traffic accident data, for sure,” he says. “Only about a quarter of the data was being recorded. We need reliable figures to create effective public policy. Better quality data will improve our decision-making when it comes to accident prevention.”

In Senegal, Day of Remembrance activities centre around awareness-raising. Together with Red Cross Senegal and the National Health Education and Information Service, WHO is supporting awareness-raising activities and training for students, drivers and road-users in general. Some 11 sessions have been planned in three departments of Dakar, Thiès and Diourbel, to take place between now and the end of the year.

Dr Lucile Imboua, WHO Representative in Senegal, says it is through these sessions that real change can be made.

“There will be teams raising drivers’ awareness on road rules, helping students understand road signals and offering road users basic safety tips,” she says. “We continue to place the emphasis on prevention for better road safety, because prevention remains the best remedy.”

This year, in addition to the Day of Remembrance, a Decade of Action for Road Safety 2021 – 2030 has been declared, with the goal of reducing by half the number of accident-related deaths and injuries by the year 2030.

All of which is a comfort to Dieng. For him, helping others avoid his fate has become a reason to live.

“Each day the roads claim lives,” he says. “My children were between 21 and 40 years old. My daughters were both preparing to get married; my younger son was starting his first job. They had their whole lives ahead of them.

“As painful as it is for me, it’s important to let people know the hazards,” he stresses. “I wouldn’t wish on anyone what I’ve endured. If my story can make a difference, it will have been worth it. My children will not have died in vain.” 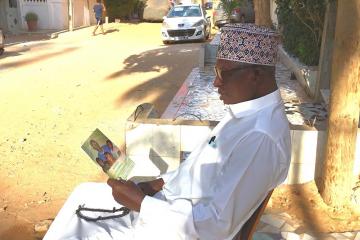