by anish dogra
in Africa News
Reading Time: 2 mins read
A A
464
SHARES
1.8k
VIEWS
Share on FacebookShare on Twitter

South Africa have been dealt with a huge blow as their director of rugby, Rassie Erasmus, has been banned from all rugby-related activity for two months.

The 49-year-old was given the suspension after posting an hour-long video during the summer’s British and Irish Lions tour, in which he criticised the officiating of referee Nic Berry.

It’s far from the ideal preparation for The Springboks, who face England in the Autumn Internationals at Twickenham stadium this weekend – live on talkSPORT 2.

Erasmus is also suspended from all match-day activities, including coaching and media engagement, until September 30, 2022.

Six charges of misconduct were upheld and Erasmus has confirmed his intention to appeal the decision.

Alongside the bans, Erasmus and the South African Rugby Union have been told to issue a full apology to Berry within the next two weeks.

In the video itself, the former flanker accused the referee of treating captain Siya Kolisi differently to Alun Wyn Jones.

The charges upheld by an independent misconduct committee included attacking, disparaging and/or denigrating the game and match officials and not accepting the authority of match officials.

The first charge said that Erasmus threatened a match official that unless a requested meeting took place, he would publish footage containing clips criticising the match official’s performance and then made good on that threat. 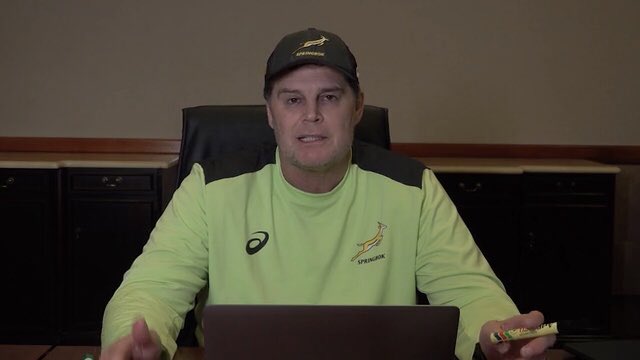