by emmanuel egobiambu
in Africa News
Reading Time: 2 mins read
A A
464
SHARES
1.8k
VIEWS
Share on FacebookShare on Twitter

Nigeria, Tanzania, Uganda, and Kenya will compete in the qualifying round for a ticket to the tournament. To confirm the importance of the mission, Coach of the Yellow-Green Asanka Gurusinha confirmed they got into Kigali, Rwanda in good time to enable the team to settle ahead of the busy qualifying schedule.

“This qualifiers’ schedule is a tough one and I think our team is very ready for the on-field battle. At each stage of our preparation, we have brought in new learnings that have improved the quality of the team. I think we have a far better team going for this event now, and we are optimistic of a good outing,” he said.

Gurusinha also confirmed that Slyvester Okpe will replace Joshua Ayanaike as the team captain at the event and he is confident Okpe will carry the team along.

President of Nigeria Cricket Federation, Uyi Akpata corroborates that it is important the team gets adequate preparation before competing.

“We have had the team training together for weeks and had two major tournament exposures in Uganda and the bilateral series at home to hone them better for this event. We are very pleased with the way the team is turning out and equally hope for the best outing when we file out in Kigali from Wednesday,” he added.

Akpata explained that as part of the federation’s developmental agenda, they hope to leverage the exposure and experience that the tournament will provide.

“A bulk of the Nigerian team members are from the Under 19 World Cup team in 2020 including the new captain; it shows our long-term objective for the national team. The team also comprises a number of talented experienced players. It is a mix that the head coach is working with now and we are backing him all the way,” he said.

The Nigerian team will go against Tanzania and Uganda on the opening day, Wednesday, November 17 at the Gahanga International Cricket Stadium in Kigali. The team will resume with another doubleheader against Kenya and play Uganda again at the IPRC Cricket Ground on Thursday.

The teams will take a break on Friday and return for the final round on Saturday, November 20, where Kenya and Tanzania will clash at the IPRC grounds in Kigali. 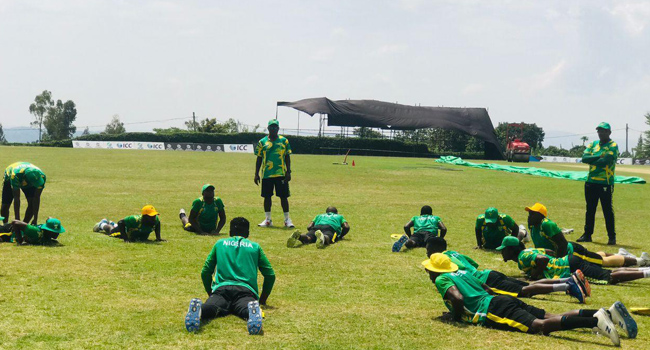