by margarett block
in Africa News
Reading Time: 3 mins read
A A

FW de Klerk, the former president of South Africa and the last white person to lead the country, has died at the age of 85.

De Klerk, who was also a key figure in the transition to democracy, had been diagnosed with cancer this year.

In 1990 he announced he was releasing Nelson Mandela, leading to historic elections that brought the anti-apartheid leader to power.

De Klerk shared the Nobel Peace Prize with Mandela for helping to negotiate an end to apartheid. But his legacy divides opinion in South Africa.

A statement from the former president’s FW de Klerk Foundation on Thursday said that he died peacefully at his home in Cape Town following his struggle against mesothelioma cancer.

The foundation had announced the diagnosis – a cancer that affects the lining of the lungs – in June.

De Klerk is survived by his wife Elita, his children Jan and Susan and his grandchildren, the statement said.

The former president was born in March 1936 in Johannesburg, into a line of Afrikaner National Party politicians.

He worked as a lawyer and served in a series of ministerial posts before taking over from PW Botha as the head of the National Party in February 1989, and months later becoming president.

In a famous speech to parliament the following year, he announced that he was removing the ban on parties that included Mandela’s African National Congress (ANC).

He also announced that Mandela would be released from prison after 27 years.

His actions helped bring an end to apartheid-era South Africa, and he became one of the country’s two deputy presidents after the multi-party elections in 1994 that saw Mandela become president.

He retired from politics in 1997 saying: “I am resigning because I am convinced it is in the best interest of the party and the country.”

Although the relationship between De Klerk and Mandela was often punctuated by bitter disagreements, the new president described the man he succeeded as someone of great integrity.

In a statement on Thursday, the Nelson Mandela Foundation said De Klerk would “forever be linked to Nelson Mandela in the annals of South African history”.

“De Klerk’s legacy is a big one. It is also an uneven one, something South Africans are called to reckon with in this moment,” the statement added.

Many have blamed De Klerk for failing to curb violence against black South Africans and anti-apartheid activists during his time in power.

Last year, he became embroiled in a row in which he was accused of playing down the seriousness of apartheid. He later apologised for “quibbling” over the matter.

Human rights lawyer Howard Varney described him as an “apologist for apartheid”.

But South Africa’s main opposition party, the Democratic Alliance, said his contribution to the country’s transition to democracy could not be overstated.

“His decision, within a year of taking over the presidency… to unban liberation movements, release Nelson Mandela from prison, lift the ban on political marches and begin the four year negotiation process towards our first democratic election was a watershed moment in our country’s history,” party leader John Steenhuisen said in a statement.

The reactions here in South Africa echo the divisions that have stalked FW de Klerk for decades. Some see him as a decent man, a rare politician who took the unusual step of negotiating a path – for himself and for his party – out of power, and in doing so, helped to steer the country away from the racial civil war that many feared would engulf South Africa in the late 1980s and early 1990s.

But others, including Nelson Mandela, were more guarded, seeing de Klerk as a political opportunist, a conservative Afrikaaner, who realised that with the Cold War over and international sanctions biting, he had no alternative but to negotiate with the black majority.

In recent years, a younger generation of South Africans – some encouraged by populist politicians – have sought to question the compromises that accompanied South Africa’s transition to democracy, and have argued that De Klerk and other apartheid leaders should be held responsible for the death squads that targeted members of the liberation movement.

De Klerk did apologise for elements of apartheid, but right up until his death he still struggled to acknowledge that the apartheid regime’s actions – in treating millions of black South Africans as second class citizens, limiting their education, and banishing them to black “homelands” – constituted a crime against humanity.

More on this story 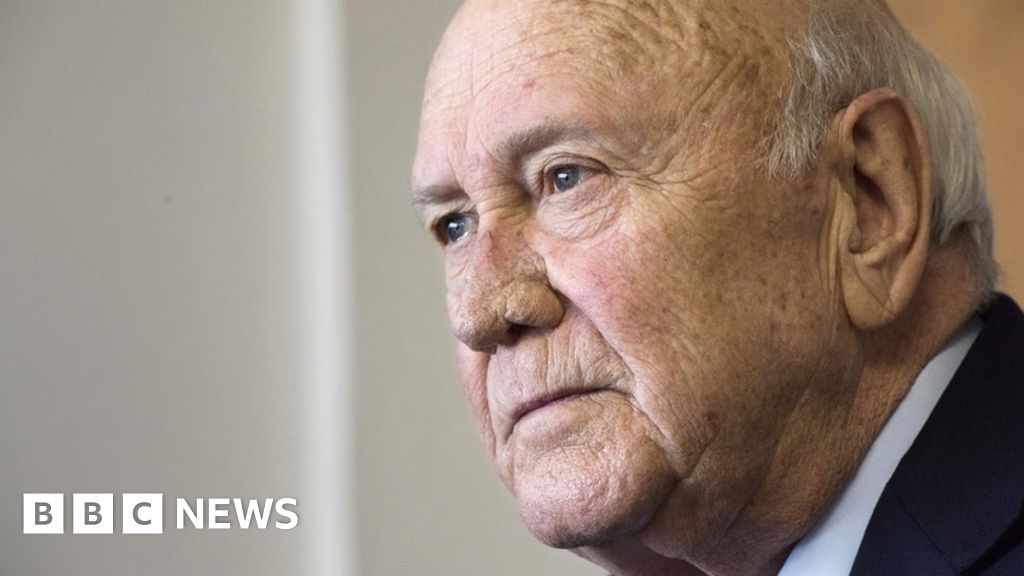