by ignatius igwe
in Africa News
Reading Time: 4 mins read
A A
464
SHARES
1.8k
VIEWS
Share on FacebookShare on Twitter

Buhari in a statement issued on Thursday by his spokesman, Garba Shehu, said the death of South Africa’s last white president “is the end of an era because of his tremendous impact on history and the cause of justice.”

“Ending the obnoxious apartheid system by a white President was an incredible act of moral courage and fierce commitment to human rights regardless of the colour of the victims of racial segregation and discrimination in South Africa,” Buhari was quoted as saying.

READ ALSO: Nigerians Can Look After Themselves When Infrastructure Is In Place – Buhari

According to Buhari, the late South African leader had put humanity and justice before personal political ambition by dismantling the abhorrent apartheid system.

“History will be greatly kind to the late de Klerk because it takes a lot of moral audacity to do what he did at the time he did it. De Klerk who won a joint Nobel Prize for Peace in 1993 alongside Nelson Mandela, will not be forgotten for years to come because of his immense and immeasurable contributions to world peace, human rights and justice,” President Buhari added.

Battle with cancerDe Klerk died on Thursday aged 85, having helped steer South Africa to democracy while never fully owning up to the horrors of the apartheid past.

He died at home after a battle with cancer, his foundation said in a statement.

Yet he never found a place in democratic South Africa and became seen as an apologist for the torture and killings committed by the segregationist regime.

His testimony had been demanded in several current cases seeking answers over past atrocities.

But in a surprise move, he tendered an apology — in a posthumous video message.

“I without qualification apologise for the pain and hurt and the indignity and the damage that apartheid has done to black, brown and Indians in South Africa,” he said in the video released by his foundation.

‘Big but uneven legacy’The Nelson Mandela Foundation captured the sentiments of many, saying: “De Klerk’s legacy is a big one. It is also an uneven one, something South Africans are called to reckon with in this moment.”

President Cyril Ramaphosa noted that De Klerk “played a vital role in our transition to democracy.”

The office of one of the harshest critics of apartheid, Archbishop Emeritus Desmond Tutu, said “the former president occupied an historic but difficult space in South Africa.”

De Klerk’s appearance before the Truth and Reconciliation Commission, which uncovered the atrocities of the white-minority regime, met with Tutu’s chagrin.

At the time, Tutu expressed “disappointment that the former president had not made a more wholesome apology on behalf of the National Party to the nation for the evils of apartheid,” his foundation said.

But opposition Democratic Alliance leader John Steenhuisen said “rather than dividing our country, may his passing and his memory make us even more determined to work towards a united South Africa.”

Had he “not relinquished power in 1994, likely SA would be Syria or Venezuela today,” Leon tweeted.

De Klerk sparked fury last year when he denied apartheid was a crime against humanity, despite the UN declaring it such.

“The idea that apartheid was a crime against humanity was and remains an agitprop project initiated by the Soviets… to stigmatise white South Africans,” he said.

Ramaphosa reacted angrily, telling lawmakers that the comments were “treasonous”.

Born in Johannesburg into a family of Afrikaners, a white ethnic group descended mainly from Dutch colonisers, his father was an apartheid senator who served briefly as interim president.

After studying law, De Klerk was elected to parliament as a member of the National Party that instituted apartheid.

De Klerk held several ministerial positions before he became president in 1989, a position he held until he handed over the reins to Mandela after the first democratic elections in 1994.

His funeral dates are yet to be announced.

He is survived by his wife Elita, children Jan and Susan, and grandchildren. 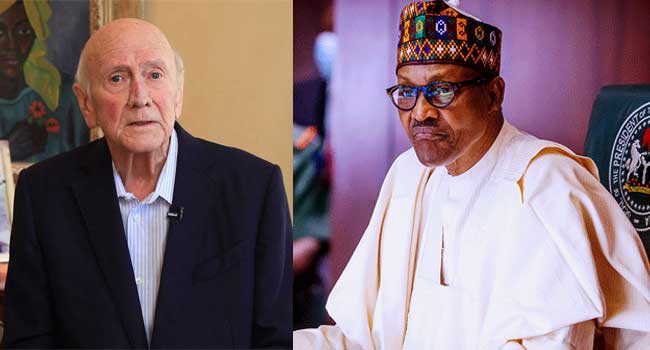 Chooya receives $950,000 from EWC, others to digitize word of mouth marketing

Chooya receives $950,000 from EWC, others to digitize word of mouth marketing