by rhiannon lewin
in Africa News
Reading Time: 2 mins read
A A
464
SHARES
1.8k
VIEWS
Share on FacebookShare on Twitter

The footage from last month, which you can see in the video player above, shows Bernard Janse van Rensburg jump from the plane before eight other skydivers.

He wrote that he had felt the Beechcraft King Air “’slip’ once and then twice.”

“It is a fascinating and unusual thing to see your jump aircraft below you in freefall,” wrote Janse van Rensburg, who released the jump video on ViralHog earlier this week “for general information and educational purposes to the aviation community.”

He said that he “knew something was wrong and decided to let go of the now banking aircraft,” but that his fellow divers were “fully focused on achieving correct positioning and exit timing”.

That meant the other skydivers ended up “missing the tell-tale signs of an imminent stall,” Janse van Rensburg added.

The plane was flying at 16-thousand feet in South Africa. Credit: YOUTUBEThe video shows the plane spin out of control and then descend dangerously close to the divers.

“The moment was surreal and I could not believe what I was seeing,” Janse van Rensburg wrote.

“Everything happened in slow-motion and I remember thinking ‘am I really seeing the plane spinning nose down next to us?’ After the spin, the aircraft started to veer underneath us but luckily did not make contact,”

Five divers were still inside the plane while it spiralled.

In the incredible footage, the group of skydivers are seen freefalling alongside their plane. Credit: YouTube / Bernard Janse van RensburgThe pilot gained control and was able to safely land the plane, Janse van Rensburg said.

The divers also all made it safely to the ground.

“The next day the jump team made adjustments to their exit procedure following discussion with the pilot and no further incidents or near-incidents were experienced,” he wrote. 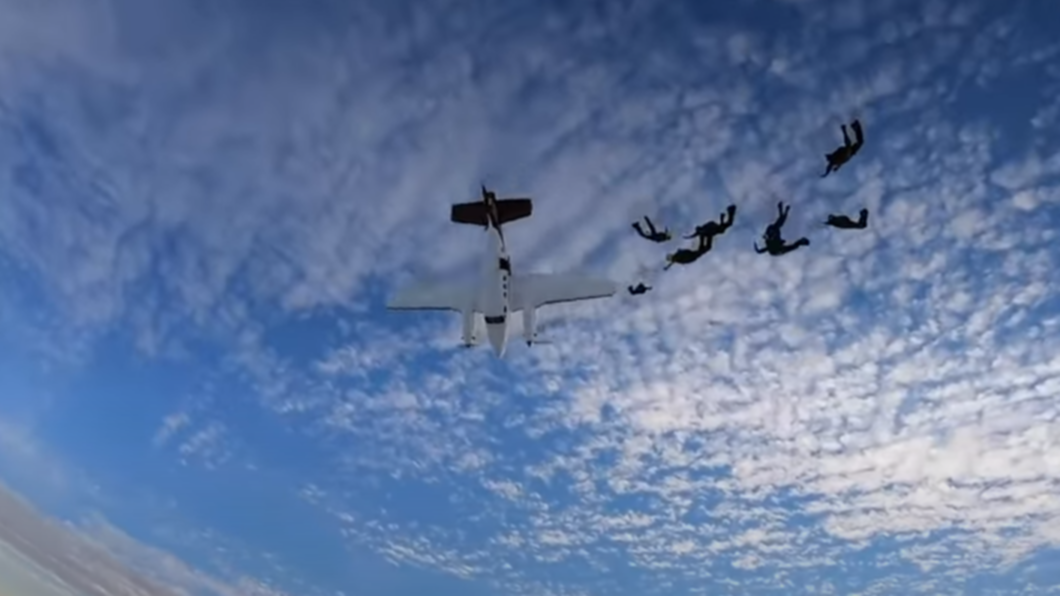