by randy roberie
in COVID-19
Reading Time: 4 mins read
A A
464
SHARES
1.8k
VIEWS
Share on FacebookShare on Twitter
ADVERTISEMENT

The U.S. central bank has begun to cut monetary stimulus as the economy continues to crank out jobs. But supply bottlenecks and the delta variant make predictions difficult.

For the first time since COVID-19 shattered a roaring economy in the spring of 2020, the U.S. Federal Reserve — the Fed — has decided to start cutting monetary stimulus, central bank head Jerome Powell announced Wednesday.

“The pandemic recession was the deepest and the recovery has been the fastest,” Powell said.

But speaking to financial reporters after the Fed’s monthly meeting to discuss interest rates and the rate at which the central bank buys bonds to stimulate the economy, Powell made it clear that with such an unusual recession and a strange recovery, accurately foretelling the path of jobs and inflation is not possible.

While the central bank is not planning interest rate cuts yet, it has announced it will begin scaling back, or “tapering,” its $120 billion US purchase of bonds [MDASH] a tool it has used to make borrowing cheaper.

While both U.S. and Canada are still waiting for the latest employment numbers to come out Friday, Powell has been forced to weigh the risks of cutting stimulus too quickly at the peril of slowing jobs growth against moving too slowly and unleashing a wave of inflation.

With market commentators taking strong positions on both sides of the issue, Powell and the central bank cannot wait for a consensus.

The decision has been complicated by new outbreaks of the delta variant of the virus and by the unforeseen catastrophe in the world’s trade in goods where supply bottlenecks have pushed inflation higher than the Fed had previously forecast.

Before the latest delta surge, the U.S. economy was cranking out a million jobs a month. Powell would like to avoid significant cuts in stimulus so as to allow that kind of jobs growth to restart. But the spectre of long-lasting inflation cannot be ignored.

“We have to make policy in a world where the two goals are in tension,” he said. “It’s very difficult.”

Powell’s solution is to play it down the middle, holding off on rate hikes to help boost job creation while being ready to stomp on the brakes if that becomes necessary.

On Friday, economists expect the U.S. to announce it has cranked out 400,000 new jobs bringing the unemployment rate down to 4.7 per cent. In Canada it’s expected 50,000 jobs will have been created with unemployment falling from 6.9 to 6.7 per cent.

“What it boils down to is something that’s common sense and that’s risk management,” Powell told the virtual gathering of reporters. “We need to be aware of the risk … of significantly higher inflation.”

Predicting inflation’s trajectory is not Powell’s only challenge. The labour market itself continues to be hard to read, with plenty of jobs and not enough applicants. The participation rate — a measure of the portion of the working-age population that is working or actively looking for work —  has been falling sharply, and there has been a sharp rise in people quitting their jobs.

“People are leaving their jobs, quitting their jobs, in all-time high numbers, but in many cases going back into employment and getting higher wages,” said Powell. He said that has been the main cause of wage growth in the economy and that it is a strong indicator of a recovering labour market.

“Wages have been moving up strongly — very strongly,” he said.

One interesting note was the Fed chair’s attempt to redefine “transitory,” a central banking concept that implied inflation would soon come back down on its own. Like Bank of Canada Governor Tiff Macklem before him, Powell gave the distinct impression he was no longer so willing to wait.

“Really for us, what transitory has meant is that if something is transitory it will not leave behind it, permanently or very persistently, higher inflation,” he said.

Powell described an economy that was still at the mercy of the COVID-19 virus in ways that he could not have predicted only months ago.

“We have to be humble about what we know about this economy which is still very covid-affected,’ said Powell, noting the resurgence in the virus over the last 90 days has been an unexpected setback. 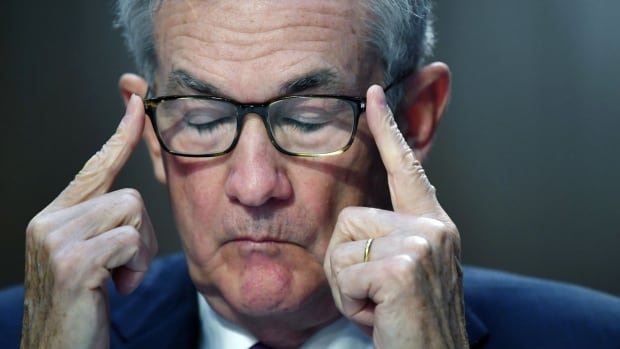