by alex shephard
in Robotics
Reading Time: 5 mins read
A A
464
SHARES
1.8k
VIEWS
Share on FacebookShare on Twitter

Salman Rushdie, the Booker Prize–winning novelist, insists that he is not, like so many media members before him, going to Substack—at least not full-time. He won’t be publishing his next book on the newsletter platform. Instead, he’s taken an advance from the company to fool around with “whatever comes into” his head. This will apparently include a serialized novella. “I think that new technology always makes possible new art forms, and I think literature has not found its new form in this digital age,” Rushdie told The Guardian. “Whatever the new thing is that’s going to arise out of this new world, I don’t think we’ve seen it yet.”

“People have been talking about the death of the novel, almost since the birth of the novel,” he continued. “But the actual, old fashioned thing, the hardcopy book, is incredibly, mutinously alive. And here I am having another go, I guess, at killing it.”

Rushdie isn’t wrong. The physical book has, somewhat improbably, maintained its supremacy in the digital age. Unlike the DVD or CD, nothing has truly emerged to threaten the analog; the printed page hasn’t yet had to make a “vinyl comeback.” At the same time, the book has hardly adapted to the internet age at all. Whatever the genre, books are simply not at all different than they were a few years ago, and no one seems particularly bothered about it. Not too long ago, there was a brief push to embrace things like QR codes to unlock digital supplementary material, but readers weren’t interested; the Kindle, meanwhile, is dominant among e-readers in large part because it so eerily replicates the feel of reading a physical book.

Yet it’s highly unlikely that Rushdie—or Substack—will plot the novel’s, let alone the book’s, next act. For years, people have been predicting that the internet would radically upend the future of literature, and yet, stubbornly, literature has refused to change. One reason for the book’s continued relevance is that it remains a surprisingly robust and effective piece of technology in its own right—every effort to find its future only ends up reminding everyone about what it already does better than other mediums.

Less than 10 years ago, the consensus within much of the publishing industry was that the physical book was on its way out. Just as Napster had killed the CD and Netflix the DVD, Amazon’s Kindle, unveiled in late 2007, heralded a seismic change for a medium that had held sway for more than 500 years. The book had been slowly falling in the public’s estimation ever since people ran out of a movie theater, in 1896, thinking that a train was going to kill them.

By the late 2000s, the reasoned thinking was that the book was an inferior communication technology, about to be left behind by the startling array of digital entertainment options.

It didn’t seem like such a bad bet: Digital books would soon outpace physical ones. This change would, in turn, bring about a dramatic change in form. Writers were limiting themselves when thinking only in text: Why not explore audio and video? Why not turn the book into an immersive experience? Why not allow readers to interact with the story itself, turning any book into a Choose Your Own Adventure experience?

There were two big problems with this thinking. The first was that what many of these theorists were describing was not, in fact, a book. In many instances, what they were describing was closer to a video game: an experience in which readers guided a narrative with audiovisual dimensions. The oddest thing about reading many fevered imaginings of the future of the novel was that they had been played out in things like Metal Gear Solid. (My own favorite game series, The Witcher, is a rarity in the game world, as it’s based on a series of Polish short stories, suggesting that the literature-to-game pipeline is being curiously underexploited.) There was, moreover, no evidence that readers truly wanted to be overwhelmed by audio and video while reading: Many, in fact, were turning to books precisely to escape the information overload that defines life in the twenty-first century. As Lincoln Michel argued on his Substack, it turns out that people just like books, and print books in particular.

The second error that these media futurists made was overestimating how vulnerable the book was to digital technology. Many people, when they listen to music, like to jump around between artists: The iPod allowed them to do so seamlessly. Movies are consumed in one two-hour period, and most people don’t know what they want to watch before they sit down on the couch, a problem solved by Netflix. But most people read one book at a time—no one was lugging an entire library to the beach. A Kindle can store thousands of books, but who cares? Having an ocean of literature at your fingertips is neat, but it doesn’t change the time-tested user experience of reading in a dramatic way.

And so, 14 years after the Kindle, e-books are prevalent but not dominant, a decision that stemmed in part from public appetite and in part from publishers’ insistence that books not get devalued the way that music, in particular, was—a new e-book typically costs only a few dollars less than a new hardcover on Amazon, which has a virtual e-book monopoly. And so the calls for some new form have largely ceased. (In terms of fiction, authors have also barely figured out how to write about the social internet, let alone integrate it into their work.)

Substack is, nevertheless, an intriguing development, but it’s one that harkens to fiction’s past rather than its future. Serialization was hugely popular in the nineteenth century and was embraced by many authors, most notably Charles Dickens. The techniques it encourages—suspense, in particular—would seem particularly valuable in the peak TV era. There are calls every few years for a return to serialization, in part because it seems like a guarantee of renewed relevance for the novel, a way of competing with cliffhanger-driven shows that dominate Twitter discussion.

Rushdie is adamant that he won’t be the person to figure out the book’s next chapter: “I have a very strong suspicion, it is not going to be somebody of my age who comes up with it,” he told The Guardian. He’s probably right: For the moment, he seems most excited to use Substack to blog, which doesn’t make him that unique to the platform. (Blogging, like the book, is also oddly resilient.) Still, I have a suspicion that, despite the hype, there isn’t much of a future for serialization. People like to read at their own pace and have shown little interest in gimmicky attempts at serializing books. More importantly, this type of doled-out entertainment is currently being done much more effectively by television creators. In a world in which a practically infinite array of entertainment options are constantly at one’s fingertips, serialization simply doesn’t make a lot of sense. (In any case, if you were going to start somewhere, it would probably be with a Gillian Flynn–type writer of literary thrillers, not a past-his-peak Salman Rushdie.) Substack’s dipping its toe in fiction, but don’t expect it to replace Farrar, Straus and Giroux.

Rushdie has, for his part, mostly shrugged his shoulders at the idea that he would be the artist finally to deliver a killing blow to this “incredibly, mutinously alive” art form. Perhaps we can kill off the narrative of the book’s imminent demise and look to those areas that truly need an intervention. To wit: Technology itself has done little to alter the form of the book itself; its main impact on literature has been economic. We don’t have immersive books with snippets of audio and video. Instead, we have Amazon, a destructive behemoth whose workers are treated like robots, which started its life as an online bookstore. 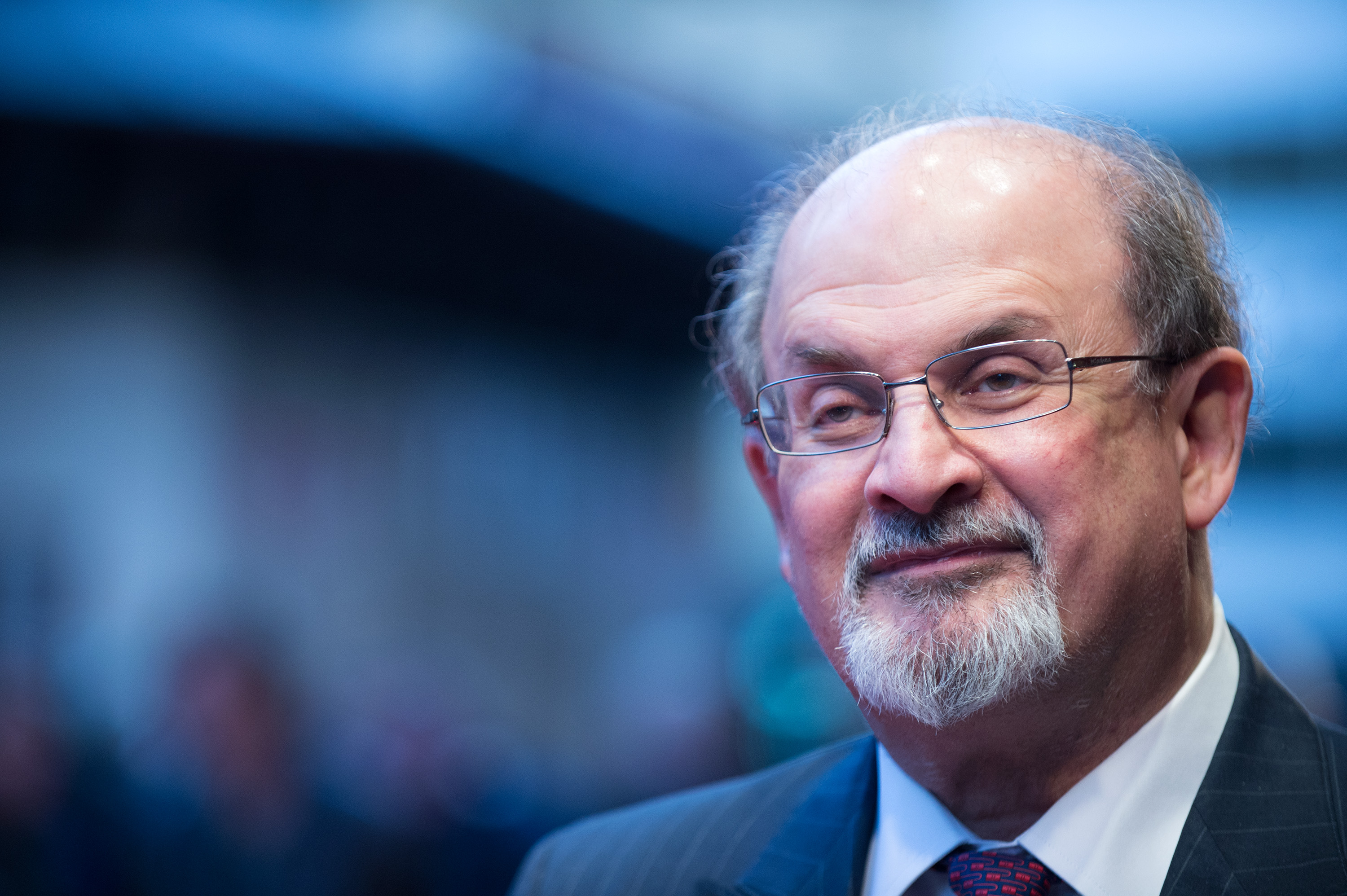 ‘Malcolm X’, ‘The Iron Giant’, ‘Cinderella’: The movies to stream this weekend

'Malcolm X', 'The Iron Giant', 'Cinderella': The movies to stream this weekend