by michele center
in Africa News
Reading Time: 2 mins read
A A
464
SHARES
1.8k
VIEWS
Share on FacebookShare on Twitter

South Africa skittled out a struggling Bangladesh for 84 in 18.2 overs and then knocked off their target in 13.3 overs to consolidate their second position in Group 1

South Africa skittled out a struggling Bangladesh for 84 in 18.2 overs and then knocked off their target in 13.3 overs to consolidate their second position in Group 1

Kagiso Rabada (3 for 20) and Anrich Nortje (3 for 8) registered career-best T20I figures as South Africa humbled Bangladesh by six wickets in a Super 12 match in Abu Dhabi at the ICC T20 World Cup on Tuesday.

Chasing a paltry 85, South Africa stuttered before a 47-run stand between Temba Bavuma and Rassie van der Dussen guided the side home with 39 balls to spare. This win gives South Africa’s net run rate a boost (0.742) and keeps its qualification hopes alive.

Earlier, an unchanged South Africa won the toss and chose to field. Opener Mohammad Naim was caught off Rabada in the fourth over, trying the slog across the line. Soumya Sarkar, in at No. 3, was given out lbw off the next ball, upon review.

With Rabada swinging the ball at a good pace, Bavuma gave him an extra over inside the first six, and the right-arm pacer didn’t disappoint. He had Mushfiqur Rahim caught at gully with a lifter from short of a length. He nearly had a fourth when he got Mahmudullah fending at a short ball, but it didn’t carry to the bowler. The PowerPlay produced only two fours for Bangladesh.

There was no let-up as Bangladesh continued to lose regular wickets, never quite threatening to pull away from the South African bowlers. If Rabada ran through the top-order, Nortje and Dwaine Pretorius carved out the middle order. Nortje got Mahmudullah caught at point with a pacy short ball before Pretorious castled Afif Hossain for a golden duck. Bangladesh crept to 40 for five — the lowest score after 10 overs in the Super 12s.

Liton Das made a steady 24 but soon joined the procession of shell-shocked Bangladesh batters when left-arm wrist-spinner Tabraiz Shamsi (2 for 21) trapped him in front. Shamim Hossain and Taskin Ahmed followed suit. Nortje then wrapped up the innings with two wickets in the 19th over.

Our code of editorial values 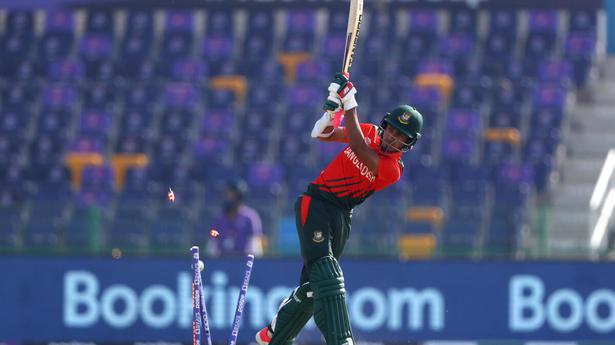