by dion fleishman
in Africa News
Reading Time: 4 mins read
A A
464
SHARES
1.8k
VIEWS
Share on FacebookShare on Twitter

South Africa beat Sri Lanka by four wickets in a thrilling T20 World Cup clash at Sharjah; David Miller hits back-to-back sixes in the final over as Proteas chase down 143 despite hat-trick from leg-spinner Wanindu Hasaranga

A six from Kagiso Rabada helped bring it down to 15 needed from the final over and when Miller (23no from 13 balls) thumped two huge sixes off Lahiru Kumara, it was down to two from three with Rabada hitting the winning runs from the penultimate ball of the match.

Scorecard: South Africa vs Sri LankaWorld Cup tables | Results and fixturesEarlier, Pathum Dissanka’s 72 from 58 was the standout innings as Sri Lanka were bowled out for 142 from the last ball of the innings, with Tabraiz Shamsi (-17) and Dwaine Pretorius (3-17) shining with the ball for South Africa.

Victory takes South Africa to two wins from three games in Group 1 of the Super 12s to boost their hopes of reaching the semi-finals.

Having been asked to bat first, Sri Lanka lost Kusal Perera in the fourth over with the left-hander emphatically bowled by Anrich Nortje before Nissanka and Charith Asalanka added 41 for the second wicket.

That stand seemed to be gathering a little momentum before a mix-up saw the returning Quinton de Kock break the stumps to run out Asalanka (21 from 14) and when Shamsi had Bhanuka Rajapaksa (0) caught and bowled in the next over, Sri Lanka were wobbling.

Shamsi got his second in his next over, a carbon copy of the first, Avishka Fernando this time offering the return catch to leave Sri Lanka 77-4.

The wickets kept tumbling with Nissanka the only batter to offer any real resistance, but it proved significant as he thumped six fours and three sixes before falling to Pretorius late in the 19th over and a further two wickets in the last saw Sri Lanka bowled out.

South Africa’s reply began well enough before Dushmantha Chameera’s double strike in the fourth over saw the back of both opening batters, Reeza Hendricks lbw two balls before De Kock skied one and the bowler got underneath it to take the catch.

Rassie van der Dussen and Bavuma got things moving again but the running between the wickets was questionable even before the former was caught well short of his ground by Dasun Shanaka’s direct hit at the non-striker’s end.

Bavuma and Markram were able to rebuild over the next seven overs, accumulating gradually with boundaries hard to come by, but just when they needed to kick on, Hasaranga got a flat delivery through Markram’s defence to end a 47-run stand.

Bavuma was going at less than a run-a-ball before clobbering Chameera over mid-wicket for six in the 17th over as the game looked set for a grandstand finish.

That is exactly what it got as Hasaranga returned to bowl the 18th and proceeded to have Bavuma and then Pretorius caught in the deep to complete what he would have hoped was a match-winning hat-trick.

With Miller at the crease though, South Africa were still well in the game and Rabada kept it that way with a maximum off Chameera (2-27) in the 19th.

However, with 15 needed from the last, Sri Lanka were still favourites before Miller clubbed the second ball high over the legside to swing the game back in South Africa’s favour.

Six more, nailed over deep mid-wicket and out of the ground next ball put South Africa on the brink and when a thick edge from Radada flew away down to third man two balls later, the Proteas were home.

WHO STARRED?Pathum Nissanka – only three Sri Lanka players reached double figures as wickets fell at regular intervals which made Nissanka’s knock all the more important. He was patient when he had to be, making sure not to throw his wicket away when his side needed him before kicking on late in the innings to take Sri Lanka up to a competitive total.

Tabraiz Shamsi – the world No 1 in T20Is showed just how he has reached that position as he took 3-17 in Sharjah. The left-arm wrist-spinner was a constant threat, his late dip causing batters as many problems as the turn itself as shown by his two caught and bowleds. His three wickets ripped the heart out of Sri Lanka’s middle order.

Dwaine Pretorius – the seamer is not an obvious choice to bowl at the death but on the wickets in the UAE, he is proving very adept at the role. He also took 3-17 with his cutters and subtle variations of line and length making him difficult to get away.

Wanindu Hasaranga – the leggie is one of Sri Lanka’s main weapons. He is yet to fire with the bat in the Super 12s but with the ball, he yet again showed what he is capable of. None of the deliveries in his hat-trick were particularly special but when he is bowling with the control he showed here, batters are forced to try and jump on any slight or even perceived errors of line or length and that brought him his wickets.

David Miller – the left-hander has long been known as a dangerous hitter late in an innings and has won plenty of games for South Africa over the years. His stock has fallen somewhat in recent times but this was a reminder of his talents and the importance of having someone capable of clearing the ropes late in an innings. Miller did just that with two mammoth blows when the pressure was really on to take Bavuma’s side to victory.

Watch the T20 World Cup live on Sky between now and November 14. 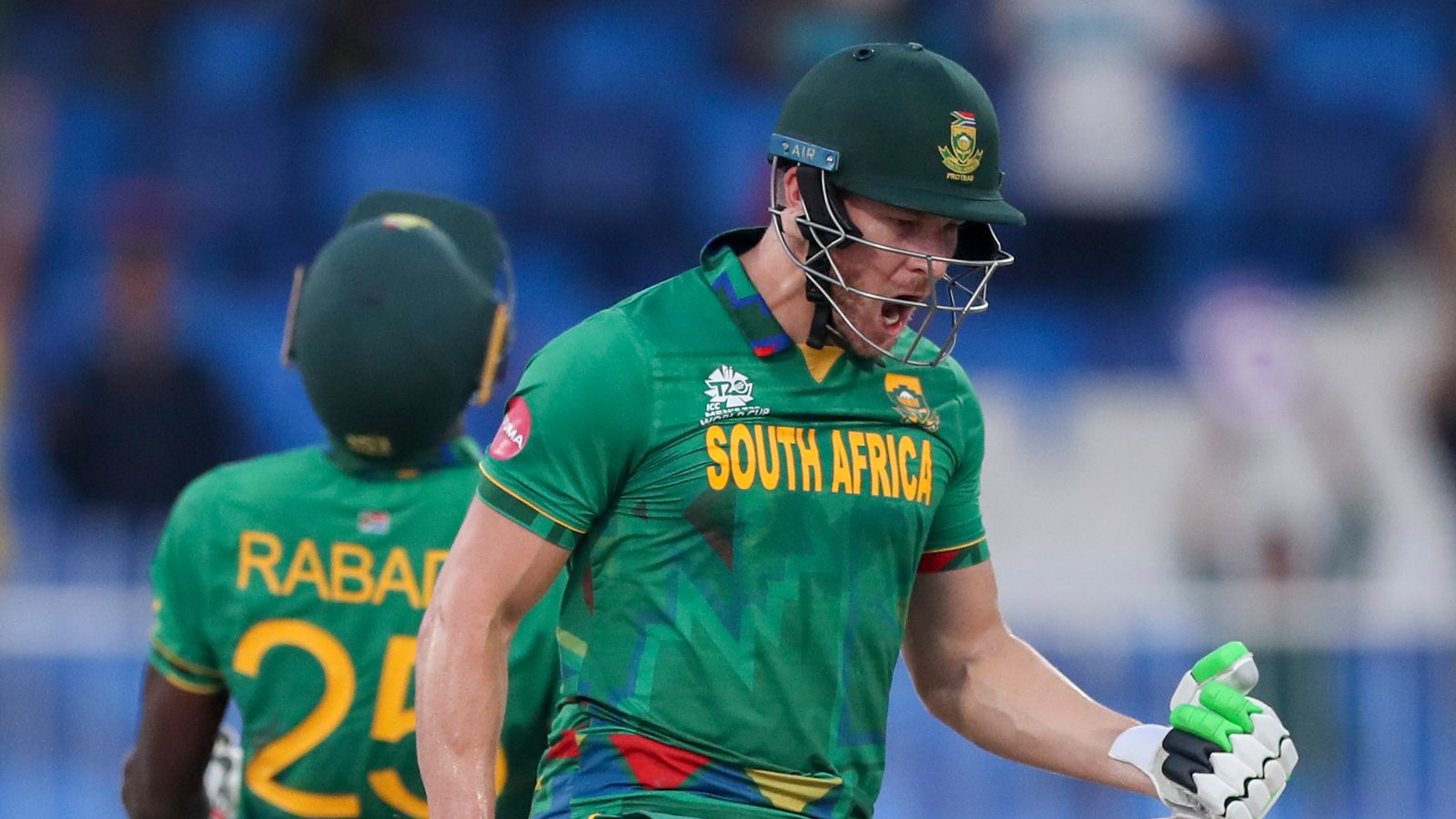