by motolani alake
in Africa News
Reading Time: 5 mins read
A A
464
SHARES
1.8k
VIEWS
Share on FacebookShare on Twitter

He rightly wants to become a true Nigerian star, a true African star and potentially, a crossover global success – as a final step.

Mayorkun isn’t ordinary. An instrumentalist and music lover, who was as good at rapping and singing found himself at the epicenter of fame in 2016 – as Dremo revealed during a 2020 chat with Pulse.

In the early days, he released two identical singles, which oozed his church background. He then rose to become Nigeria’s newest Afro-pop heartthrob, dishing out amorous pop ditties with effortless swagger. He then found his confidence as The Mayor of Lagos, taking creative risks.

He has also marked himself out to be a genuine music lover who pays attention to trends, sounds and shifts. On his aforementioned debut album and throughout 2018 and 2019, he interpolated several classic American and European hits on several songs. And he has continued with an interpolation of Big Sean’s ‘Blessed’ on ‘Back In Office.’

When people listen to his new album, Back In Office, they are quick to discuss a sonic evolution. As much as that is true, Mayorkun has never really been a one-trick pony. Although his biggest Afro-pop hits have had a signature formula in resonant hooks, resonant messaging and recently, wicked adlibs.

On his debut album, ‘Drama Queen’ was Dance-pop, ‘Geng’ was Grime and ‘Of Lala’ grew into Nigeria’s first Amapiano hit and a new alias. What happened on ‘Back In Office’ wasn’t exactly a strange sonic evolution, it was just a reimagination of sonic approach, within Mayorkun’s subtly proven capability to expand his sound and topical conversations at will.

‘Back In Office’ is also an expansion of his horizon to reflect growth, albeit with a twist.

What’s different about this album?

‘Back In Office’ projects Mayorkun as ambitious and strategic. Artists are narcissists with an insatiable appetite for success. As Mayorkun revealed on the title-track, he held down the lockdown. He also found a unique confidence to experiment with his sound, technique and even adlib. For many Nigerians, he was Nigeria’s MVP of 2020 and rightly so.

With the current successful wave of ‘Afrobeats to the world,’ and how Africa is shrinking into one huge sonic nation as our sounds continue to Kris Kross borders, Mayorkun rightly sees himself beyond just a Nigerian star who has strongly conquered South-West.

He rightly wants to become a true Nigerian star, a true African star and potentially, a crossover global success – as a final step.

This reflects in his approach to ‘Back In Office.’

And why the hell not? He is quite simply special with a ridiculously high ceiling.

With the exception of one or two tracks or moments, Mayorkun largely stepped away from the ‘vibes’ and lamba of radio-worthy Afro-pop for more coherent lyrics about grander ideas, more profound ideas, less slang and less street lingo.

Mayorkun also sings more in English, uses backing singers/choirs to elevate the musicality in his ideas and incorporates horn and guitar solos into his beats.

Socio-politically charged records like ‘Soldier Boy’ and ‘Freedom’ chart a unique course for Mayor, to give his music a more profound outlook. The English shows that Mayorkun might be building for a larger audience, beyond Nigeria.

The profound topics and the use of backing vocals/choir as well as the use of horns and guitars on ‘Soldier Boy,’ ‘Freedom’ and ‘Oluwa’ for backing solos, are reminiscent of Grammy season albums like African Giant, Twice As Tall and Made In Lagos.

Mayorkun might just be gearing to submit his album for the 2023 Grammy awards.

Even when he makes Afro-pop numbers like the ‘Back In Office’ or the amazing ‘Holy Father,’ the music is gentler and more methodical. There is greater emphasis on melodies and lesser emphasis on atypically aggressive Afro-pop drum patterns. Even though the drums on ‘Holy Father’ are thudding, you notice the melodies first.

‘Jay Jay’ is tailored towards a South African audience in sound, feature and adlibs. Mayorkun is a man on a mission for national, continental and global reach and potential domination.

When he discusses love and gratitude on ‘Holy Father’ and ‘Oluwa’ respectively, he uses Christian themes or defers to a Godhead.

As an artist, Mayorkun is also more confident in himself. He truly raps on ‘Soldier Boy,’ he takes creative risks that could pay off and flexes the earned muscles from his success on ‘No String Attached.’ He discuses detraction on ‘Freedom’ and speaks great tidings into his own future on ‘Oluwa.’

For these reasons, Mayorkun might be alienating an existent fanbase, which expects quintessential Afro-pop gems from a blended and proven lamba lord. As much as people root for change, most listeners can’t handle change.

Even when Mayorkun makes Pop on ‘Let Me Know,’ it’s different or diluted with more English and less lamba, more clear lyrics and less vibes.

Sometimes growth and ambition come at a cost. Especially when it’s at loggerheads with reputation and fan expectation.

‘Back In Office’ will unlikely be ‘lamba enough’ for fans who have come to expect proper lamba and dance music. But it’s good enough from the perspective of Mayorkun’s growth, ambition and his will to express them, and his need to experiment with something new.

As admirable and impressive as Mayor’s vision and ambition are, the music is let down by the imperfect execution. He mostly has the right ideas, but seldom the riveting production to back them up.

The ideas behind ‘Soldier Boy,’ ‘Back In Office,’ ‘Freedom’ and ‘Let Me Know’ are impressive, but Mayorkun is let down by his producers or by his own trust in familiar producers or by his trusted producers. The beats are definitely on their way to something spectacular, but they lacked that final defining element, which drives shock value.

Quality production, which inspires shock value, is the difference between ‘Back In Office’ on one side, and ‘Holy Father’ and ‘Desire’ on the other.

DMW’s in-house producers are talented, but they need to be more imaginative. Mayorkun isn’t the Mayor of 2017 anymore. You have to come with heat.

On Mayorkun’s part, some of his approaches to his ambition are also quite obvious. ‘No Strings Attached’ aligns with what Mayorkun’s Afro-pop fan base might want but it sounds so 2020, even though has all the markings of a Mayorkun hit.

Titling an East Africa-themed record ‘Nakupenda’ is also quite obvious and cliche. It feels like Mayorkun went for the easiest choices or options sometimes.

In terms of timing, October 2020 would have been the perfect time for ‘Back In Office,’ but we will take a Mayorkun album anytime we can get it. There is simply nobody like him.

Special praise must also go to his team for their impeccable and creative roll-out for the album.

In the end, ‘Back In Office’ is an improvement on ‘The Mayor of Lagos.’ It reflects growth and Mayorkun’s awareness of the soundscape and his own self. It’s also a great launchpad to spread his wings and fly out of Nigeria. His third album should be the completion of this arc and this writer looks forward to it.

Already, ‘Back In Office’ is a good album which will produce some bangers. It’s Mayorkun… duh

If serviced properly, ‘Feel Am’ has a lot of potential. This writer would like to hear Mayorkun on genres like ‘Egedege,’ ‘Ogene’ or ‘Ekpili’ though. Imagine Mayorkun on a record like Flavour’s ‘Levels.’ 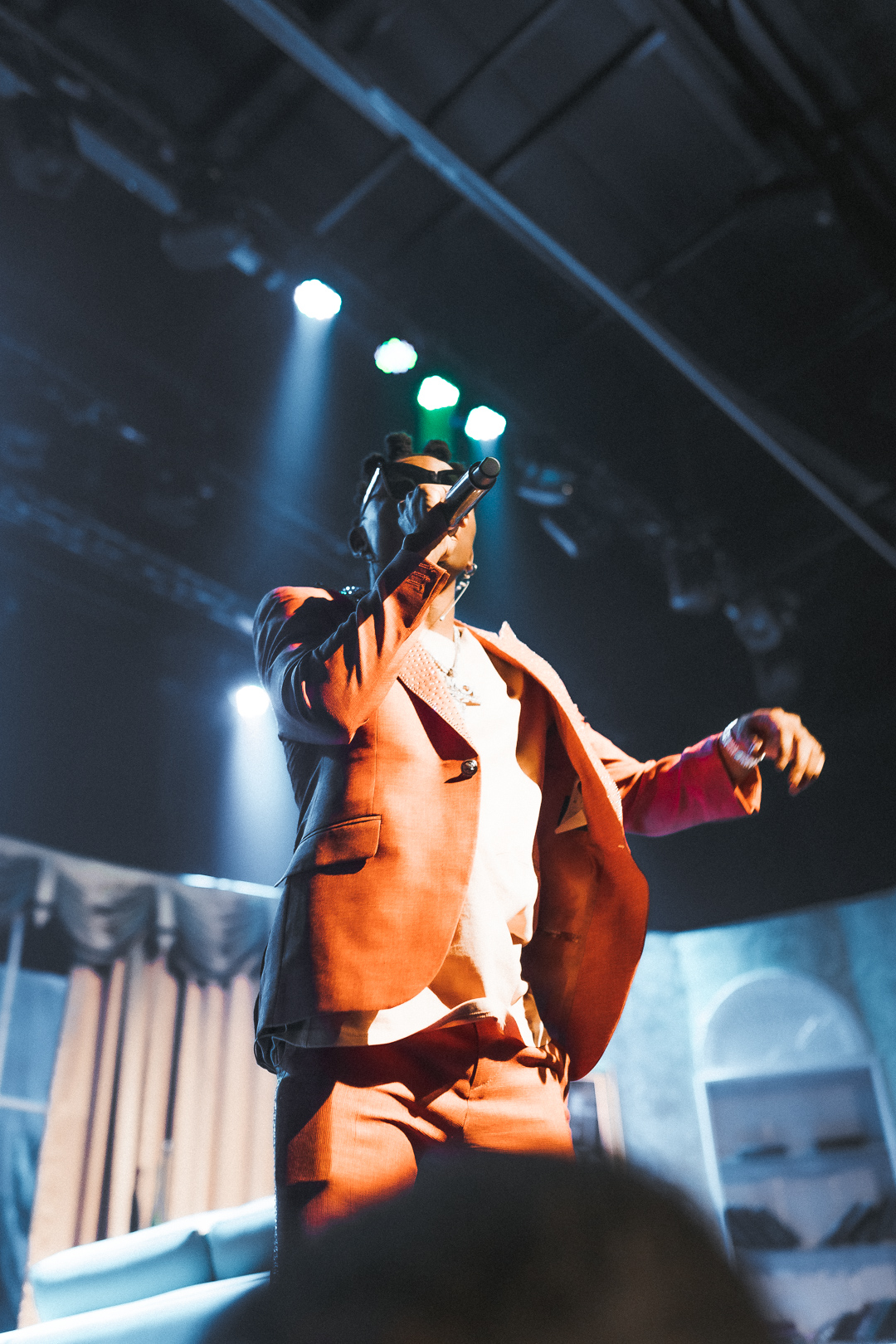