by melody schreiber
in COVID-19
Reading Time: 7 mins read
A A
464
SHARES
1.8k
VIEWS
Share on FacebookShare on Twitter

Nearly a year ago, the results from the Covid-19 vaccine trials were like a dream come true for health experts: The trials were huge and designed well, and the results were clear and persuasive. The vaccines were extremely safe and even more effective than expected. Only weeks after the data came in, the first health workers were rolling up their sleeves to receive the shots.

“I felt joy and elation when I got my first two doses of Pfizer,” Dr. Jeremy Faust, an emergency physician at Brigham and Women’s Hospital and an instructor at Harvard Medical School, told me. But he is a lot more wary of the pharmaceutical company’s next project: boosters. “I would feel very, very uncomfortable, given the data today, taking a booster myself at the age of 42, because I have not been shown what the benefit is,” Faust said.

Days before the Biden administration plans to roll out boosters, the scientific community is embroiled in debate over whether they are even needed for most people. And a recent spate of new publications only adds to the growing turmoil. The U.S. Food and Drug Administration’s advisory committee on vaccines is set to discuss the divisive issue on Friday. But for some, Pfizer’s 23-page application on 300 adults who received booster shots created more questions than answers.

Some countries are forging ahead to offer third shots despite scant data, even though vaccinating unvaccinated people around the world would be an effective strategy for stopping the emergence of new variants that could respond worse to vaccines. Vaccine inequity is already stunning, with only 2 percent of people in low-income countries receiving first shots. It could get even worse if rich countries focus on giving third and fourth shots to the vaccinated rather than giving first and second shots to those with no protection.

“Reading this document, I felt like I was getting gaslit,” Faust said. The document says both that immunity is waning and that the vaccines are holding up well; it says there is data to support these decisions, and then it says there’s not enough data to make a decision now, he said. “Unfortunately, it’s reminiscent of the usual shenanigans that pharmaceutical companies engage in, as opposed to last year, where it was just so straightforward,” he said. Looking at a sample size of 300 adults, he said, is not enough to make a decision like this. (The data from the original trials, which led to the emergency use authorizations and full FDA approval for the Pfizer-BioNTech vaccine, was much clearer and more robust.)

In a perspective published in The Lancet on Monday, international scientists said there is no evidence to suggest the general population needs Covid vaccine boosters yet. Boosters may be needed eventually, the authors concluded, particularly if the effectiveness of the vaccines drops over time and as new variants emerge. But there’s not enough data to show they are needed now for most people.

More research is needed to see if certain groups of people could benefit. A new study on vaccine boosters published in the New England Journal of Medicine on Wednesday found that a third shot of the Pfizer-BioNTech vaccine among people over the age of 60 decreased their chances of hospitalization and severe illness. But there’s a catch: The study only followed people for 25 days after the third shot, making it difficult to ascertain if the effect is temporary.

“There’s certainly some signal toward a short-term benefit,” Faust said. “The question is, how long does that persist?” Researchers were not surprised that the vaccines would offer more protection soon after the shots were given, but if the effect is small and temporary, then those doses might be more effective going to the unvaccinated not just in the United States but around the world, in order to halt the virus’s spread and evolution.

The debate over boosters exposes tensions between the White House and scientific agencies, as well as the uncertainty of conducting science in real time during a health emergency. The Biden administration is expected to announce on September 20 that boosters are recommended for everyone eight months after the second shot of the Pfizer-BioNTech vaccine. (It will likely be another several weeks before the FDA has reviewed data on the Moderna and Johnson & Johnson jabs.) The news, which broke in August, confused and dismayed many experts who were concerned about politicization of the regulatory process.

In his speech last week, Biden said, “The decision of which booster shots to give, when to start them, and who will get them will be left completely to the scientists at the FDA and the Centers for Disease Control [and Prevention].” But setting the September date made some observers worry about political pressure on the scientific process. Dr. Philip Krause and Dr. Marion Gruber, two authors on the Lancet paper, resigned from the FDA two weeks ago. According to sources close to them, they were concerned about the agency being undermined on this and other issues. (“Of course there is pressure,” a federal official admitted to The Washington Post.)

The FDA already recommends additional doses for immune-compromised people—including those with organ transplants, current and recent cancer patients, and others receiving immunosuppressant medications. Some experts also argue that nursing home residents and those over the age of 65 may benefit from the increased protection offered by an additional shot. But it’s far less clear how much the general population needs more shots at this time.

The vaccines have declined slightly in protecting against infection from delta compared to previous variants. But hospitalizations and deaths remain low among fully vaccinated people who are able to mount a good response to the initial round of vaccines. And it’s possible the rise in hospitalizations and deaths among vaccinated people in recent months is related more to the increased transmissibility and virulence of the delta variant—not because of waning immunity, Faust said.

Early reports on waning vaccine efficacy are “preliminary and difficult to interpret precisely due to potential confounding and selective reporting,” the Lancet authors write. It’s difficult to estimate vaccine efficacy from observational studies during rapid vaccine rollout, they said. It’s also normal for antibodies to wane, but memory cells continue to provide long-lasting protection against severe illness and death among many people.

Public Health England released a report on Thursday showing that antibodies do wane slightly, but they still offer good protection against severe disease and hospitalization for most people in England five months after the second dose. There is a drop in protection in hospitalization after the age of 65, especially for those over 80, the report found. But protection among younger, lower-risk adults is still very strong—almost 100 percent, Professor Christina Pagel, director of the clinical operational research unit at University College London, pointed out.

Nevertheless, the U.K. announced on Tuesday that it will give boosters to people over the age of 50. And Israel announced on Sunday that it may roll out fourth doses at some point.

The World Health Organization has called for a moratorium, until at least the end of this year, on wealthier countries recommending booster shots as many other nations struggle to meet demand for first shots. At least 40 percent of people around the globe should be fully vaccinated before others receive additional doses, the WHO says. At the G7 meeting in New York this month, Biden reportedly plans to advocate for 70 percent vaccination coverage around the globe within the next year.

“Even if some gain can ultimately be obtained from boosting, it will not outweigh the benefits of providing initial protection to the unvaccinated,” the Lancet authors said. If boosters become necessary, they added, studies should focus on the effectiveness of updated shots that may respond better to specific variants.

Vaccines play a key role in ending the pandemic, Faust said. But it’s important to study the best use of boosters and updated vaccines before deploying them—such as figuring out the best vaccines against variants and identifying those at high risk of becoming sick or passing the virus on despite being vaccinated. Until then, the best way to slow the spread of the virus and prevent the rise of new variants is to help communities in the U.S. and abroad get their first shots. “The way out of it is through vaccination, actually,” Faust said, “but not necessarily through knee-jerk boosting.” 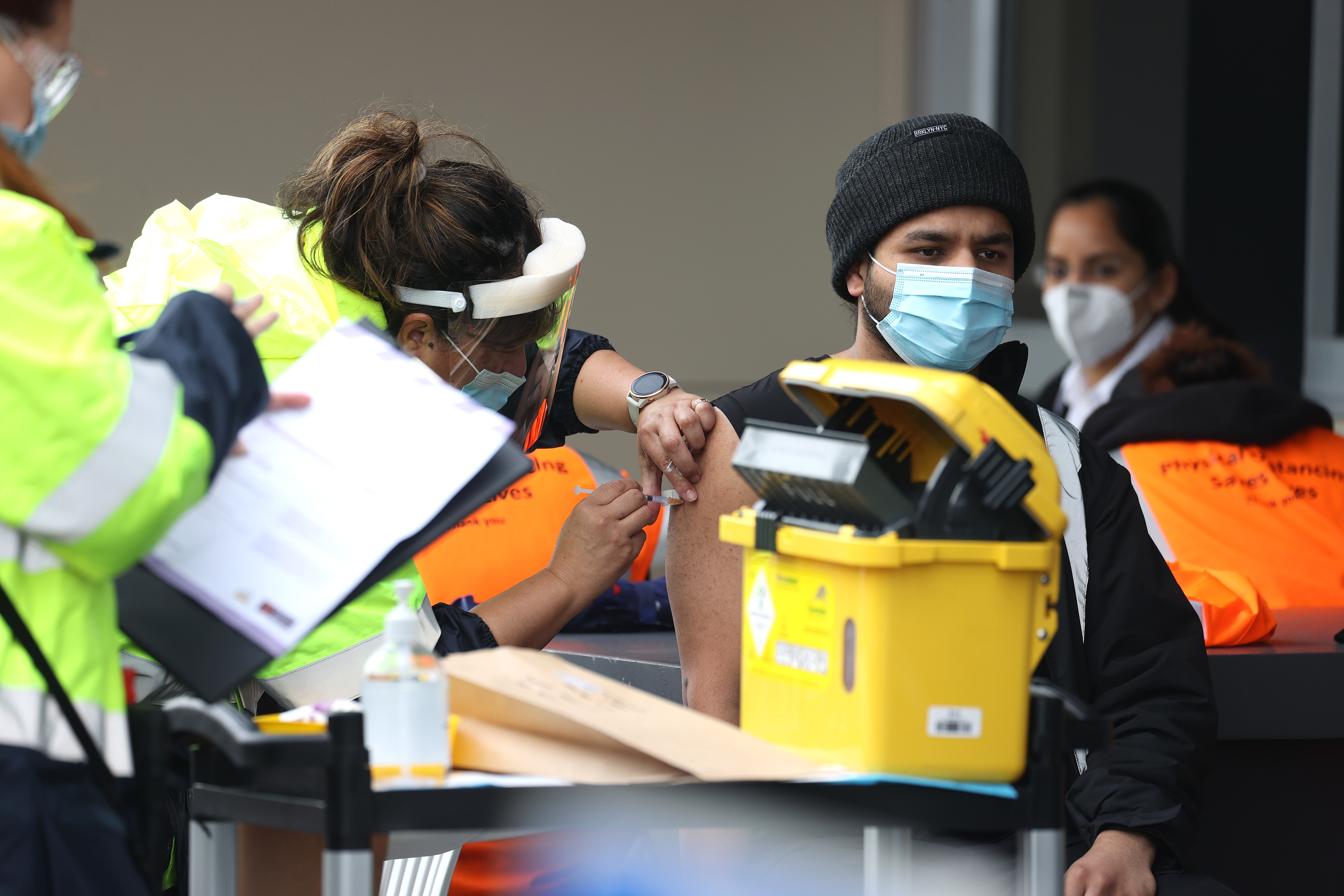