by laine pecora
in Africa News
Reading Time: 5 mins read
A A
464
SHARES
1.8k
VIEWS
Share on FacebookShare on Twitter

South Africa defeated West Indies by eight wickets in their second Super 12 fixture of the ongoing T20 World Cup at the Dubai International Stadium on Tuesday. Chasing a target of 144 runs, South Africa posted 144 for two in 18.2 overs with Aiden Markram smashing an unbeaten half-century (51 off 26 balls). Rassie van der Dussen also remained unbeaten after playing a knock of 43 in 51 deliveries. Initially, West Indies posted 143 for eight in 20 overs. Evin Lewis gave his side a strong start with a knock of 56 off 35 balls but after his departure, West Indies suffered a batting collapse. Dwaine Pretorius was in top bowling form for South Africa and took three wickets in two overs. (SCORECARD)

Single and South Africa have won the game by 8 wickets.

Fifty Up For Markram!

Russell to Markram, knuckle ball and SIX!! Fifty comes up for Markram in the chase of 144 runs.

Russell to Markram, FOUR to covers. He is the man in form and South Africa are close to victory now.

Rampaul to Markram, SIX!! The ball gone very far and the way Markram played that shot was amazing!!

Another SIX from Markram!! Against Pollard this time, over mid-wicket!!

Walsh to Markram, SIX!! The ball was in the slot and Markram played brilliantly over long-on.

OUT!! brilliant diving catch from Shimron Hetmyer!! Dangerous Hendricks has to depart!!

After 7 overs, South Africa are in commanding position in the chase of 144 runs vs West Indies. Reeza Hendricks is going strong with Rassie van der Dussen while West Indies seek wickets.

Akeal to Hendricks, SIX!! over long on!! First maximum for South Africa.

RUN OUT!! Wicket on the last ball of the first over!! Good bowling from Akeal Hosein!!

RUN OUT!! Wicket on the last ball of the first over!! Good bowling from Akeal Hosein!!

7 runs from the final over and West Indies finished their innings at 143.

Pretorius to Hayden Walsh, OUT!! caught by R Hendricks.

Pretorius is on a hat-trick now!!

Ohh!! Amazing catch by Rassie van der Dussen!! Kieron Pollard has to depart in the last over.

RUN OUT!!!! Shimron Hatmyer has to depart this time. South Africa bowlers are aiming to keep the total below 150.

OUT!! BOWLED!! Russell has to depart this time!! Poor batting show by West Indies again!

Pretorius to Gayle, Caught behind!! Fourth wicket falls for West Indies! Yet another poor show by Gayle.

SIX!!!! Gayle has joined the party! Maximum straight down the ground.

Shamsi to Pollard, Monstrous SIX!! Excellent hitting from skipper. He is the key for a good finish.

OUT! BOWLED!!! Kagiso Rabada strikes as West Indies are three down now. Simmons has to depart now. Yet another batting failure from the defending champions.

Maharaj to Pooran, OUT!! Good catch by Miller!

Maharaj to Lewis, out Caught by Rabada

SIX!! Another brilliant shot from Lewis against Maharaj this time.

Shamsi to Lewis, SIX to complete his half-century. Team’s total is 65 and Lewis got 50 out of that, he played brilliantly till now.

Maharaj to Lewis, SIX, to long off. Lewis is playing in a different zone today.

Another boundary from Lewis, straight down the ground.

Markram to Lewis, FOUR, to finish the over. 18 runs from the over and West Indies are off to a good start.

Another SIX from Lewis!!!! This time over long on. Two in two for Lewis!

Markram to Lewis, SIX, over deep mid-wicket. Lewis is on fire!

SIX!! Another brilliant shot from Lewis!! Rabada bowled a length ball and the left-hander played it over the bowlers’ head.

Rabada to Lewis, FOUR, to point. First boundary of the match.

Good Over By Markram!

Just 4 runs from the first over bowled by Aiden Markram.

Once again players showed their gesture to support Black Lives Matter movement by taking the knee before the match.

South Africa skipper Temba Bavuma has won the toss and elected to bowl vs West Indies in Dubai.

Hello and Welcome to the live blog of the South Africa vs West Indies T20 World Cup 2021 match. Both the teams are coming in this game after a defeat in their opening match of the tournament. Kieron Pollard-led side was bundled out for 55 in their first match vs England while South Africa too had a poor show with the bat vs Australia in their tournament opener. 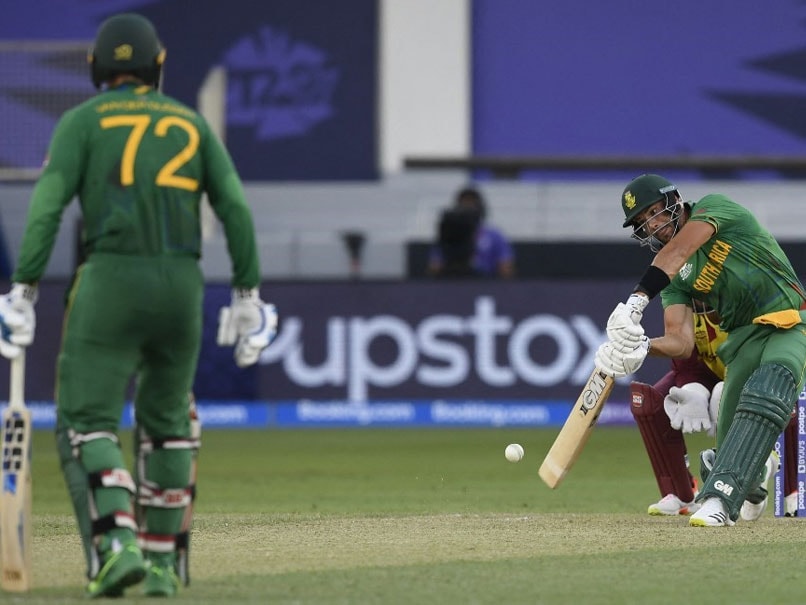