Deyalsingh: No child must die from covid19

by clint chan tack
in COVID-19
Reading Time: 3 mins read
A A
464
SHARES
1.8k
VIEWS
Share on FacebookShare on Twitter

HEALTH Minister Terrence Deyalsingh said no child must die from covid19 or any of its variants, with 305, 370 doses of Pfizer vaccine in Trinidad and Tobago.

He made this statement at the virtual health news conference on Monday, as he announced the rollout of covid19 vaccination for older schoolchildren, starting on Wednesday.

Deyalsingh said, “We..all of us at (the Ministry of) Health and the regional health authorities (RHAs)…will hate..will not like it if five weeks from now, six. seven..eight, nine, two months from now..we hear about a child in this 12-18 cohort who has passed from covid.”

He added this is because TT has a solution, with Pfizer vaccines which are World Health Organization (WHO)-approved for children between 12 and 18 years.

Deyalsingh said it took a five-week period ( which included a first dose of Pfizer, a second dose of Pfizer three weeks later and another two weeks) for a person to be fully vaccinated against covid19 with Pfizer.

He said if parents and guardians love their children, they should get them vaccinated against covid19 in the same way they were vaccinated at two months old against other illnesses like measles and yellow fever. “Now we are trying to protect tomorrow’s leaders, the future of this country, from this virus called covid19 and the delta variant.”

Deyalsingh said the rollout of the Pfizer vaccination for children will start on Wednesday at 14 mass vaccination sites in Trinidad. Tobago will have its own set-up to do the same thing for children on the island.

Out of the 14 sites in Trinidad, Deyalsingh said only the Divali Nagar site at Chaguanas will not be operational on Wednesday but will be active on Sunday.

He also said the Heliport in Chaguaramas and the Wallerfield Raceway will be drive-through vaccination sites.

All children between 12 and 18, Deyalsingh continued, regardless of school status (in or out of school) or nationality, can be vaccinated. He said there will be no appointment system for them.

Only one parent or guardian should accompany the child to the site (with a form of identification, the child’s birth certificate and proof of relationship to the child, for guardians only) so as to avoid overcrowding and maintain physical and social distancing.

He also said he received a request from the Living Water Community to vaccinate 1,500 migrant children who fall into the 12-18 cohort. Deyalsingh said a block appointment could be made for them at the National Academy for the Performing Arts (NAPA) in Port of Spain.

Chief Medical Officer (CMO) Dr Roshan Parasram said three children who contracted covid19 remain in intensive care. At a virtual health news conference on August 9, Principal Medical Officer Dr Maryam Abdool-Richards said UWI was doing tests to determine whether or not they had been exposed to the delta variant.

While the Sinopharm vaccines has been approved to be administered to women who are breastfeeding, Deyalsingh said he will hold a roundtable meeting on Tuesday with the Pan American Health Organization (PAHO), Caribbean Public Health Agency and other stakeholders to discuss whether the Pfizer vaccine could be given to pregnant women. Should there be consensus, Deyalsingh said an announcement could be made at Wednesday’s virtual briefing.

Referring to concerns the Prime Minister raised on August 14 about only 50 per cent of nurses being vaccinated, Deyalsingh said he continues to speak with the TT Registered Nurses Association and the RHAs about this issue. 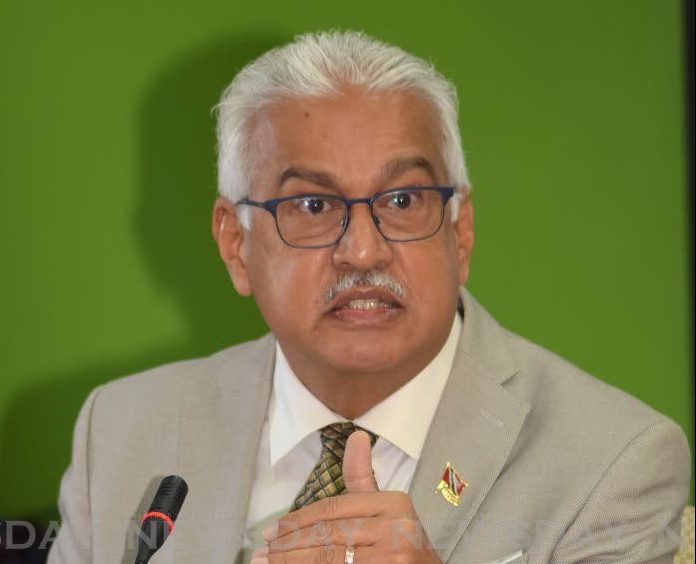