by laine badon
in Africa News
Reading Time: 2 mins read
A A
464
SHARES
1.8k
VIEWS
Share on FacebookShare on Twitter

Cape Town — Foootage showing a group blocking the vehicle of opposition MDC Alliance leader Nelson’s Chamisa’s delegation in Charumbira area has been shared online. In the video, a chanting group is seen holding anti-sanctions placards while blocking the road with burning logs.

MDC Alliance has blamed the ruling Zanu-PF party for the action.

Southern Africa Director with the Africa Division at Human Rights Watch Dewa Mavhinga condemned the incident, adding that stones were thrown at the convoy.

Members of Chamisa’s entourage were taken to hospital after being “badly injured by hired thugs”, Report Focus News said. “Burning logs were used to beat up the delegation and block the road to Charumbira Village,” the party said.  It did not say who exactly was behind the violence.  Meanwhile, a privately owned newspaper has reported that armed riot police have blocked an attempt by Mr Chamisa to hold a meeting with provincial party leaders at a private home in Masvingo city.

Zimbabwe’s Permanent Secretary for Information Publicity and Broadcasting Nick Mangwana dismissed the incident as “drama” by the opposition to disrupt the #COP26 and the Special Rapporteur’s engagement.

“We are in the even of #COP26 and the Special Rapporteur’s engagement is about to happen. Do you know what else has started? The Dramas,” Mangwana said. 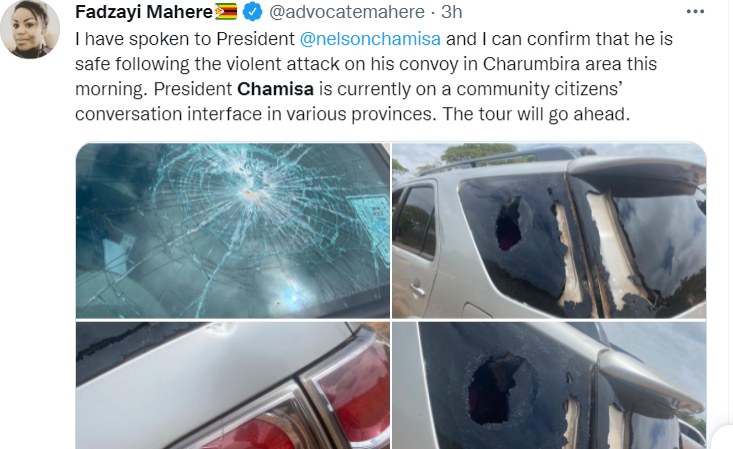 This one for Africa: The Nobel Prize ennobles itself

This one for Africa: The Nobel Prize ennobles itself